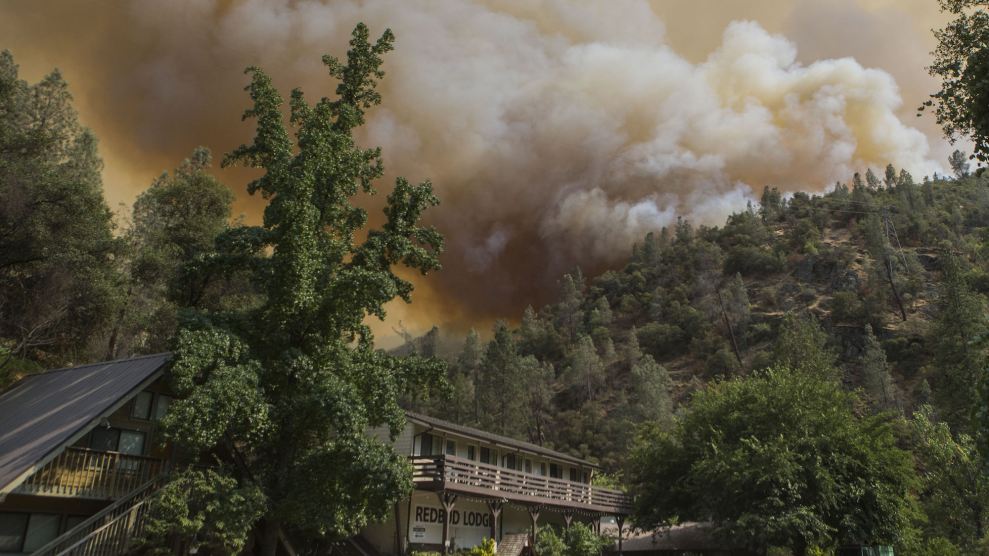 Fire works its way over a ridge toward the RedBud Lodge as the Ferguson Fire, near Yosemite, continues to burn.Marty Bicek/Zuma

This has been a summer of soaring temperatures and catastrophic fires. It has been so hot all over the world that even the Arctic is getting scorched: Temperatures in Deadhorse, Alaska, which is along the Arctic Coast, reached 80 degrees Wednesday—the average high for July is 56 degrees. And Europe saw its second-hottest June on record.

In fact, June had higher than normal temperatures across the globe. The average temperature worldwide was the fifth-hottest on record for the month, according to the National Oceanic and Atmospheric Administration. The ten warmest Junes on record have occurred since 2005.

Scientists have no doubts that climate change is driving the searing temperatures. “There’s no question human influence on climate is playing a huge role in this heatwave,” Myles Allen, a climate scientist at the University of Oxford, told the Guardian this week.

Here’s a look at the climate-change-fueled natural disasters taking place across the globe.

It’s the peak of summer tourist season in Yosemite Valley, but the iconic park stands empty as a ghost town. The nearby Ferguson Fire, which has scorched over 43,000 acres since it began in early July, forced the largest evacuations in the park in nearly three decades. Up and down the West Coast, from Alaska to Nevada to Wyoming, firefighters are tackling 88 blazes that are currently burning more than 750,000 acres, according to the National Interagency Fire Center. Only seven of the fires have been contained, and conditions for first responders are expected to remain dangerous in the days ahead—one firefighter was killed while battling the Ferguson Fire when his bulldozer rolled down a steep ravine—with low humidity and high heat.

Near Athens, wind-driven fires ripped through the coastline earlier this week, killing 85 people and injuring more than 180 others. Wind speeds reached more than 50 miles per hour, forcing tourists and residents to flee into the sea to escape the fast-moving flames and smoke. Greek authorities said they believe some of the blazes were started intentionally, and the hot and dry conditions from Europe’s heat wave have only made the fires more difficult to control or extinguish.

In the midst of the worst drought in decades, more than 50 wildfires are burning throughout Sweden. Although no injuries or deaths have been reported so far, there appears to be no end in sight. The Swedish Civil Contingencies Agency warned that the fire risk throughout the country will reach extreme levels as the hot and dry weather persists. Local fire bans are in place, and the agency warned that anyone who causes a fire will be held liable. “At this moment, forest fires must be fought early. A small spark can quickly spread and have serious consequences,” the agency said.

Sweden is facing forest fires.
We have helped mobilise two firefighting planes from Italy and two from France via #EUCivPro
This is solidarity in a Europe that protects. #rescEU #EUProtects
Footage by @emergenzavvf pic.twitter.com/uzfGnEpene

For the first time on record, temperatures in Tokyo reached 104 degrees as an unprecedented heat wave swept through Japan. At least 65 people have died in the last week, and more than 22,000 have been hospitalized with heat stroke. Japanese officials have classified the unending heat a natural disaster. The extreme temperatures are expected to drop soon, but the break will come in the form of Typhoon Jongdari, an equivalent of a Category 1 or 2 hurricane currently expected to hit the coast of Honshu.

An unprecedented heatwave in Japan has killed at least 65 people in one week, with the govt. weather agency now classifying the record-breaking weather as a ‘natural disaster’ https://t.co/nyKisKr09L pic.twitter.com/2mOaGAWMOJ

Temperatures have hovered over 86 degrees for much of May and June with little rainfall to combat the drought. As potato, wheat, and barley plants wither in the sun, some German farmers are destroying their crops rather than attempting to harvest them. Potato yields could fall by 25 percent, an industry group said, and a shortage of tubers big enough to be processed into French fries appears likely. A German agricultural group said crop failures this year, combined with last year’s low harvest, could bankrupt many farmers.