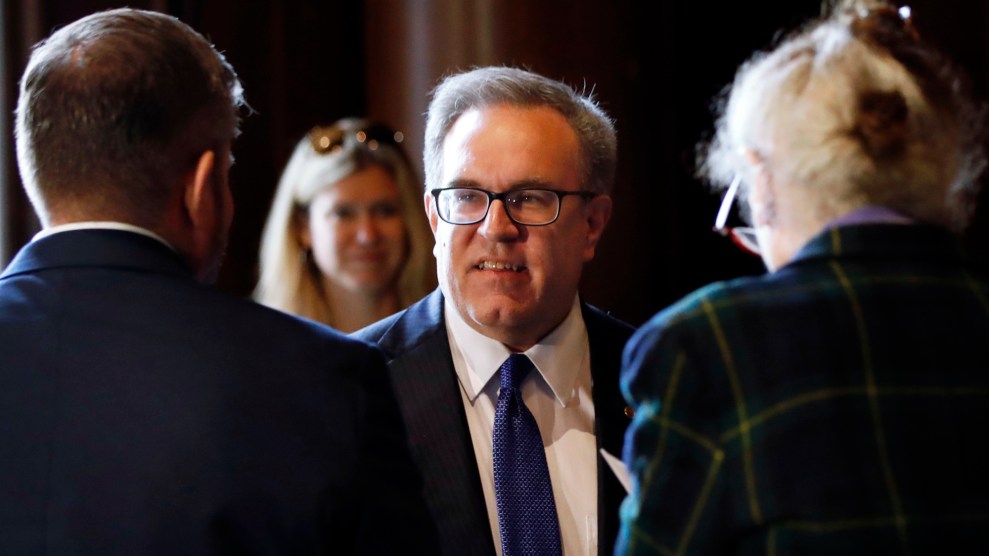 Andrew Wheeler, the new acting chief of the Environmental Protection Agency, gave an address to career employees at the agency’s headquarters on Wednesday, and he went out of his way to signal to his new underlings—and the rows of press filling the back of the room—that he won’t run the agency like his predecessor Scott Pruitt, who resigned last week after months of ethical scandals.

A number of outlets, including the New York Times and the Washington Post, for instance, ran with that theme for their headlines, quoting a part of Wheeler’s speech where he said, “When it comes to leadership, you can’t lead unless you listen.”

Here’s the New York Times story, which had the headline, “‘You Can’t Lead Unless You Listen,’ New E.P.A. Chief Says, Signaling Break From Pruitt”:

And on Wednesday, in remarks to agency employees, Mr. Wheeler—who spent four years himself as an E.P.A. staff member in the 1990s — told them he wants their advice. That is a stark difference from Mr. Pruitt, who was known to be deeply suspicious of the agency’s career staff.

“When it comes to leadership, you can’t lead unless you listen,” Mr. Wheeler told a room of about 200 employees on Wednesday.

Wheeler seemed to be a fan of the story, since he tweeted it out.

But there’s one problem. Wheeler was borrowing one of Pruitt’s favorite lines. In a similar address Pruitt gave agency staffers on his first full day at the EPA in February 2017, he promised, “I seek to listen, learn, and lead with you to address the issues we face as a nation. You can’t lead unless you listen.”

And we all know how that promise turned out.

As one EPA staffer observed to me, Wheeler had a better “read of his audience” than Pruitt did when he gave the same address. Wheeler’s speech emphasized the early years of his career when he worked at the agency and, without any direct reference to his predecessor’s controversies, he stressed several priorities that were famously weak areas of Pruitt’s—namely that Wheeler didn’t see the EPA workforce as his enemy.

While Wheeler made a pledge to EPA staffers “to defend your work, and I will seek the facts from you before drawing conclusions,” he outlined policy priorities that would be a continuation of Pruitt’s work, not a break. Before joining the EPA, Wheeler worked as an energy lobbyist for the coal company Murray Energy and spent more than a decade working for Pruitt’s climate-change-denying mentor, Sen. James Inhofe (R-Okla.). In a show of support, Inhofe attended Wheeler’s speech Wednesday.