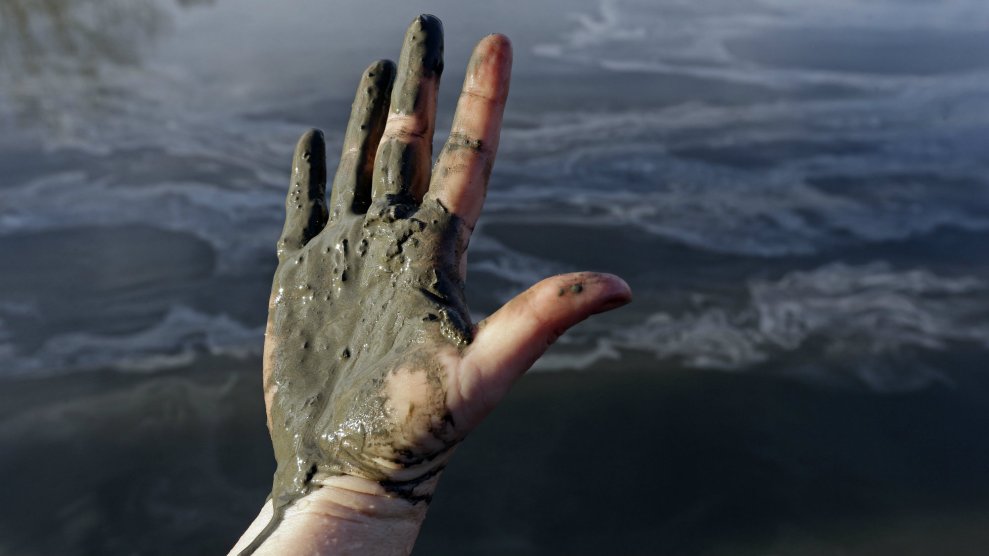 A hand covered in wet coal ash from the Dan River, which was contaminated after a spill in North CarolinaGerry Broome/AP

Last week, the Environmental Protection Agency rolled back Obama-era regulations that had protected drinking water from being contaminated with coal ash, the toxic byproduct of burning coal. Although the coal industry is heralding it as a win, environmentalists say the new rule poses a serious health risk.

“This administration is doing everything it can to give coal a free ride, including dismantling our bare minimum protections,” Larissa Liebmann, staff attorney at Waterkeeper Alliance, said in a statement.

For decades, the toxic product was dumped into unlined ponds that have the potential to leak and contaminate the drinking water in nearby communities. It was also discarded into landfills, where the wind could blow the ash into the air and further spread the toxic arsenic and mercury it contains. Those who live near disposal sites are at increased risk of cancer, heart disease, stroke, and, for children, brain damage.

A 2016 environmental justice report from the US Commission on Civil Rights found that nonwhite and low-income communities are disproportionately affected by coal ash disposal sites. The biggest coal ash disaster to date occurred in 2008, when a retaining wall surrounding the Kingston Fossil Plant in Tennessee collapsed and released more than 1 billion gallons of coal ash into two rivers. The ash mixed with the river and created a toxic sludge that destroyed or damaged 40 homes in a middle-class, mostly white neighborhood. The cleanup involved transporting the toxic waste to a landfill hundreds of miles away in Uniontown, Alabama, a small, predominantly black town where nearly half the residents are living in poverty.

In 2015, the Obama administration implemented a new rule that required groundwater testing near coal ash ponds and created standards for constructing the ponds to contain the material. But President Donald Trump’s EPA has eased the requirements: The new rule will allow industry officials to suspend groundwater monitoring at certain sites if the plant can prove it isn’t polluting the groundwater. This “opens the door for weakened monitoring,” said Lisa Hallowell, senior attorney at the Environmental Integrity Project. The rollback also extends the deadline for closing ash ponds that are leaking. Companies were originally required to clean up the leaking ponds by the end of this year, but now the EPA has extended that requirement until 2020.

The new coal ash rule is Andrew Wheeler’s first major act since taking the reigns from Scott Pruitt, who resigned earlier this month. Before joining the EPA in April, Wheeler was employed by Faegre Baker Daniels, a consulting firm that lobbied on behalf of energy companies that were against the Obama-era coal ash requirements. Wheeler said the new rule would save $28 to $31 million a year in regulatory costs. “These amendments provide states and utilities much-needed flexibility in the management of coal ash, while ensuring human health and the environment are protected,” he said in a statement announcing the new rule.

This action seems to confirm that Wheeler intends to follow in the footsteps of his predecessor, who frequently angered environmentalists by focusing on deregulation at the expense of the environment. To Hallowell, the gutting of the Obama-era rule “cements the shameful environmental legacy of the Trump administration.”