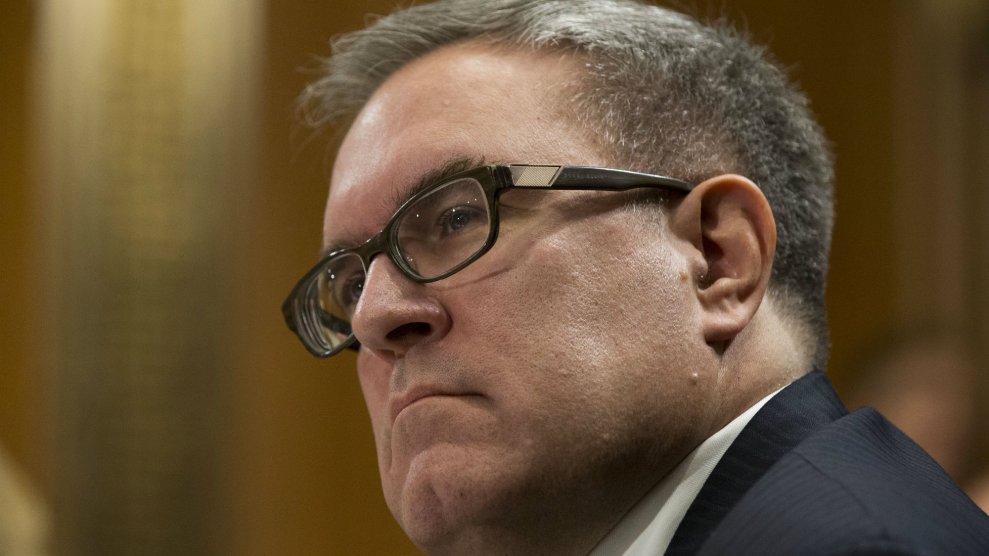 When Scott Pruitt’s scandal-plagued tenure at the Environmental Protection Agency finally came to an end Thursday, his many critics in and out of Congress wasted no time rejoicing at another Trump Cabinet member exiting under a cloud. In Pruitt’s case, with more than a dozen active investigations into his conduct still lingering.

“Finally,” wrote Rep. Don Beyer (D-Va.), a member of the House Science, Space, and Technology Committee, on Twitter. “Scott Pruitt was able to keep his position for so long—despite astonishing megalomania and unethical behavior—only because of Donald Trump’s historic embrace of corruption.” The watchdog group Citizens for Responsibility and Ethics in Washington—no fan of Pruitt—offered a one-word statement: “Good.”

Pruitt’s defenders were focused on something else entirely. The good news that Andrew Wheeler, a former coal industry lobbyist and the EPA’s deputy director, would be taking over as acting administrator. As my colleague Rebecca Leber has reported for Mother Jones, Wheeler has many supporters in the energy and coal industries:

As a lobbyist with the firm Faegre Baker Daniel, one of his major clients has been the nation’s largest private coal company, Murray Energy, whose CEO Bob Murray has been a generous Republican donor and Trump supporter. Among his other clients are the uranium mining company Energy Fuels Resources, the utility Xcel Energy, the biofuel firm Growth Energy, and the liquified natural gas company Bear Head LNG—all of which are regulated by the EPA.

For Republicans annoyed at Pruitt’s laundry list of scandals but eager to continue his legacy of undoing Obama-era environmental regulations, Andrew Wheeler is more than acceptable. Here’s a roundup of what Republican lawmakers on the Senate Environment and Public Works committee had to say about the new EPA administrator:

Sen. Joni Ernst, (R-Iowa), who called Scott Pruitt “as swampy as you get,” wrote:

I have confidence that Andrew Wheeler will be a good partner at #EPA, and I look forward to working with him on the #RFS.

Sen. Jim Inhofe (R-Okla.) was Pruitt’s mentor and staunch supporter until he could no longer face the endless ethical transgressions of his former protege. (That is, until Inhofe recanted and said he was “a little embarrassed” to have doubted Pruitt.) In a statement, he said in part:

“Andrew Wheeler is the perfect choice to serve as Acting Administrator. Andrew worked for me for 14 years, has an impeccable reputation and has the experience to be a strong leader at the EPA. I have no doubt and complete confidence he will continue the important deregulatory work that Scott Pruitt started while being a good steward of the environment. I applaud President Trump for placing him in this position.”

And then Committee Chairman John Barrasso (R-WY.), who had agreed to have Pruitt appear before his committee in August, weighed in. He said in a statement:

“I look forward to the confirmation of the next head of the EPA. In the meantime, I know Assistant Administrator Andrew Wheeler is well prepared to continue the progress already made under President Trump.”