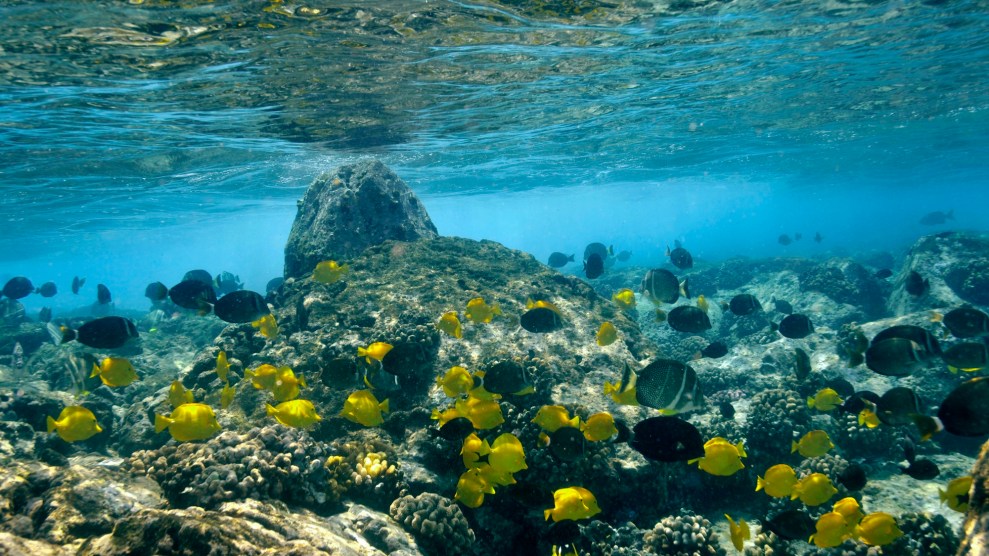 In an effort to preserve Hawaii’s marine ecosystem, state lawmakers drafted a measure to outlaw sunscreens that contain oxybenzone or octinoxate, which make coral polyps more vulnerable to bleaching. On Tuesday, Gov. David Ige signed the bill into law, meaning that as of January 2021, the majority of sunscreens currently on the market will be banned in Hawaii.

“Our own interaction with the Earth can have everlasting impacts,” Ige said at the signing ceremony. “This bill is a small first step worldwide to really caring about our corals and our reefs in a way that no else anywhere in the world has done.”

As Mother Jones previously reported, oxybenzone “deforms coral cells, damages their DNA, and, most disturbing of all, disrupts coral larvae endocrine hormones causing baby coral to encase themselves in their own skeletons and die.”

The problem with most sunscreens applied by cautious beachgoers is that it eventually washes off, spreading into the water and exposing nearby corals to oxybenzone and octinoxate. Studies have shown that even the smallest amount of the chemicals can cause coral to rapidly bleach, eliminating an essential part of the marine ecosystem that supplies essential nutrients in the food chain and protects coastlines from storm and wave damage.

In 2015, scientists confirmed a third round of global bleaching was ravaging the world’s coral reefs—the first global bleaching on record was in 1998, followed by a second in 2010. The phenomenon is triggered by environmental changes like warming water and pollutants, which causes stressed-out corals to release the algae they depend on to survive, draining them of color before they gradually starve to death. In Hawaii, more than half the state’s coral reefs were bleached between 2014 and 2015.

Industry and medical groups argued against the bill while it was up for debate because oxybenzone and octinoxate are the most common active ingredients in many sunscreens. The Consumer Healthcare Products Association, which represents manufacturers of over-the-counter medicines and supplements, said that at least 70 percent of sunscreens currently on the market will be affected by the ban, such as Banana Boat, Coppertone, and Neutrogena.

The Skin Cancer Foundation criticized the legislation as a barrier to adequate sun protection amid a public health epidemic. “By removing access to a significant number of products, this ban will give people another excuse to skip sun protection, putting them at greater risk for skin cancer,” the group said in a statement.

But as the climate warms and the reefs continue to struggle, state Rep. Chris Lee said the measure was necessary to protect the state’s remaining corals. “I’m 37 now, and within my lifetime, our planet has lost about half our coral reefs,” Lee said. “We’ve got to taken action today to protect that other half as best we can. We know the tide is against us. We’ve got a limited amount of time.”