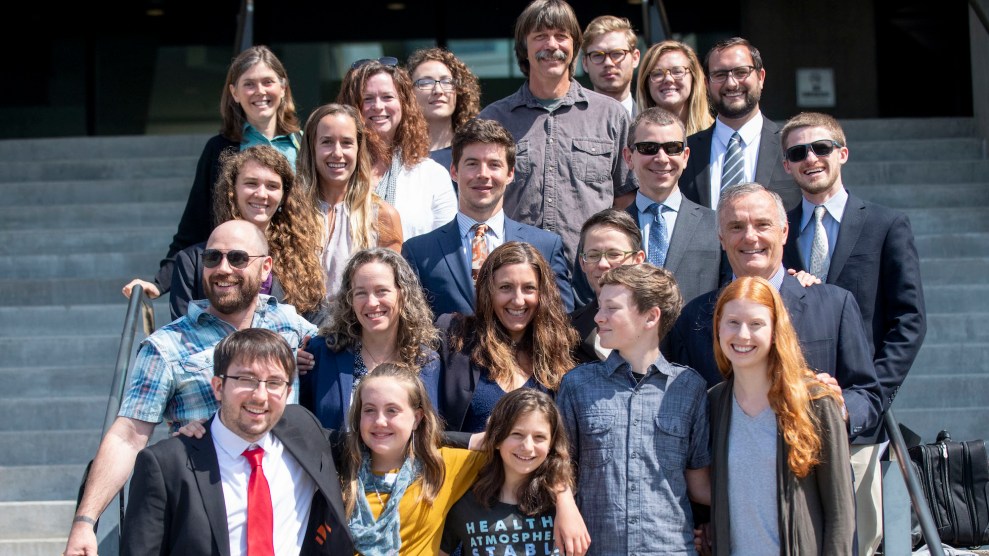 Youth plaintiffs, attorneys, and staff from Our Children's Trust at the federal courthouse in Eugene after a hearing in the Juliana v. United States climate change lawsuit in June.Robin Loznak via ZUMA Wire

The Supreme Court has rejected the Trump administration’s effort to stop a climate change lawsuit spearheaded by 21 youth plaintiffs. The plaintiffs, all between 11 and 22 years old, argue that the United States government has violated their constitutional rights by allowing fossil fuel production to continue—despite knowing its effects on the planet.

In a brief order, the high court denied the federal government’s application for a stay, calling it “premature.” The order comes on the heels of a July 20 decision by the 9th US Circuit Court of Appeals that also refused to throw out the lawsuit.

According to a press release from Our Children’s Trust and Earth Guardians, two organizations behind the lawsuit, Juliana v. the United States accuses the federal government of “creating a national energy system that causes climate change, is depriving them of their constitutional rights to life, liberty, and property and [failing] to protect essential public trust resources.” Julia Olson, executive director and chief legal counsel of Our Children’s Trust, praised the Supreme Court’s order, saying, “We look forward to presenting the scientific evidence of the harms and dangers these children face as a result of the actions their government has taken to cause the climate crisis.”

The Supreme Court also took note of the sheer ambition of the young plaintiffs’ case. “The breadth of respondents’ claims is striking, however, and the justiciability of those claims presents substantial grounds for difference of opinion,” the court noted in the unsigned order.

In April, Mother Jones spoke to Phil Gregory, lead co-counsel for the plaintiffs and some of the youthful climate activists who brought the case. “That the plaintiffs are young is a big part of their legal argument,” my colleague Amy Thomson wrote at the time. “As the government continues to neglect the consequences of climate change, they say, their future selves—and their future children—will suffer.”

The case’s origins date back to the Obama administration, when Julia Olson, an attorney from Eugene, Ore., gathered a group of young climate advocates and additional attorneys to file the suit against the government in 2015. Trump’s team inherited this case and made an attempt to stop it last year. Over the summer, the US legal team asked the Court of Appeals for the 9th Circuit to review a 2016 decision that allowed the case to move forward, known as “a petition for writ of mandamus.”  The Trump administration argued that preparation for trial—which could uncover scores of documents and communications related to fossil fuel companies—would be an unreasonable burden for the government. In response, the courts agreed to hear the oral arguments. In March, they denied the petition, which paved the way for a trial date.

Gregory told Mother Jones that he expected the Trump administration to make another attempt to stop the case, saying, “The federal government is scared to put climate science before a federal court.”

Juliana v. the United States is scheduled to be tried in the US District Court in Oregon on October 29.