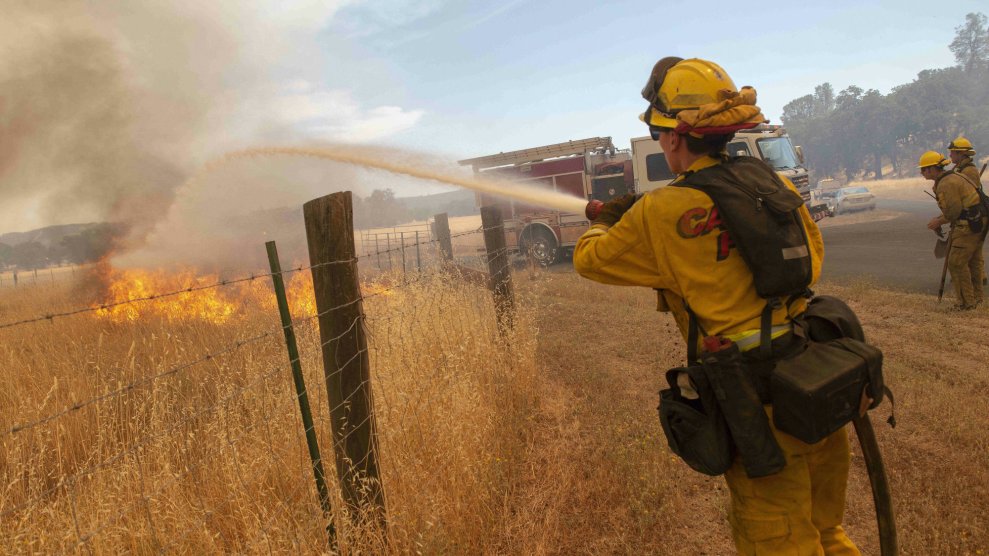 Apparently seeing a disaster as an opportunity to push partisan policy, the Trump administration has opted to continue its bizarre attempt to connect devastating California wildfires to a longstanding fight between farmers and environmentalists over water resources.

“We have plenty of water to fight these wildfires,” Scott McLean, deputy chief of the California Department of Forestry and Fire Protection, told HuffPost on Monday. “It is our changing climate that is leading to more severe and destructive fires.”

“We have plenty of water to fight these wildfires. It is our changing climate that is leading to more severe and destructive fires.”

Clearly, none of that has mattered to Trump and his team. In a statement Wednesday, Ross said the National Marine Fisheries Service will facilitate access to water that is “needed to fight the ongoing wildfires.” He did not provide any evidence to back the claim that firefighters need more water.

“American lives and property are at stake, and swift action is needed,” Ross said.

The order establishes that “the protection of life and property takes precedence” over all other current water use agreements. “Going forward,” it reads, “the Department and NOAA are committed to finding new solutions to address threatened and endangered species in the context of the challenging water management situation in California.”

Trump waded into the conversation about the catastrophic California wildfires via a series of posts to Twitter this week. But instead of thanking firefighters for their efforts or offering condolences to the victims, he took the opportunity to blast Democratic Gov. Jerry Brown and environmental protections.

Demonstrating a lack of knowledge about how watersheds function, Trump said “vast amounts of water” are being “foolishly diverted into the Pacific Ocean.” Interior Secretary Ryan Zinke followed up Trump’s tweets with an editorial Wednesday in USA Today in which he argues that the infernos are the result of “radical environmentalists” who file “frivolous lawsuits” to prevent forest management and “would rather see forests and communities burn than see a logger in the woods.”

What’s become increasingly clear is that the Trump administration’s current push has little if anything to do with controlling fires.

Last month, the California Water Resources Control Board, which consists of regulators appointed by Brown, proposed allocating less water for cities and farmers in an attempt to recover imperiled fish populations, including the Delta smelt and Chinook salmon, as The Sacramento Bee reported.

“We’ve simply taken too much water out of the system for the natural ecosystem to survive,” board Chairwoman Felicia Marcus told reporters, adding that the Sacramento-San Joaquin Delta “is on the verge of collapse.”

Trump allies, including California GOP Reps. Kevin McCarthy and Devin Nunes, have long advocated for allowing farmers to use more water. (Roughly 80 percent of all the water used in California goes to agriculture.) In fact, Nunes has rejected the idea that California’s water crisis in recent years has had anything to do with climate change or even drought.

“There was plenty of water,” he told the New York Times in 2014. “This has nothing to do with drought. They can blame global warming all they want, but this is about mathematics and engineering.”

“This has nothing to do with drought. They can blame global warming all they want, but this is about mathematics and engineering.”

Trump has parroted that talking point. At a campaign event in Fresno in May 2016, he suggested there was no drought and vowed to, if elected, “start opening up the water, so that you can have your farmers survive.”

Two weeks ago, Rep. Jeff Denham (R-Calif.) hosted Zinke in his Central Valley district to push the farmers’ side of the water issue. At a news conference, Denham said one of the goals was to show Zinke “the devastation that can happen if you push all of our water out to the ocean.”

Since taking the helm at the Department of the Interior, Zinke has met extensively with Montana native David Spady, a close friend of McCarthy and the former California state director of Americans for Prosperity, a right-wing political advocacy group that fossil-fuel barons David and Charles Koch founded in 2004. In 2014, Spady produced a documentary film about California’s water issues, which he blamed on “radical environmentalists” and Washington bureaucrats who push “utopian environmental ideals.”

In a trailer for the film, Spady says the water problems were “the result of government failing to address the water storage needs of a growing population, and then placing the interests of a tiny fish over those of farmers and households.” He was referring to the Delta smelt, which has been listed as threatened under the Endangered Species Act since 1993.

Wednesday’s decision by the Commerce Department comes less than three weeks after the Interior Department proposed significant changes to how it implements the Endangered Species Act, one of America’s most important laws for protecting plants and animals. It also marks the latest salvo in the Trump administration’s war on states’ environmental rights.

Last week, the White House proposed a rule to dramatically weaken fuel economy requirements and revoke a waiver that allows smog-choked California to set its own vehicle emission standards. The president’s ideological allies defended the move―typically, at least rhetorically, proponents of ceding federal powers to states―arguing that California overstepped by deploying a waiver originally used to limit specific local air pollutants to instead regulate the carbon dioxide emissions that are warming the entire planet.

But even Christine Todd Whitman, an Environmental Protection Agency administrator under President George W. Bush, said she believed the president hadn’t “thought through what used to be a basic principle of Republicans, and that’s states’ rights.” A coalition of 20 states, including the 13 that follow California’s vehicle standards, sued last week to block the proposal.

The rule, proposed by the EPA, comes months after Delaware vowed to sue the agency over its refusal to impose new requirements on power plants in neighboring Pennsylvania and West Virginia, leading to increased pollution in the low-lying First State.

But much of the administration’s incursions on states’ environmental powers have come from the Interior Department. In January, the agency announced the Trump administration’s sweeping new offshore drilling plan, aimed at opening nearly all federal waters to oil exploration.

Last November, the administration acted on Zinke’s recommendation to dramatically shrink the boundaries of two national monuments in Utah that Barack Obama had designated during his final days as president: Bears Ears National Monument, by 85 percent, and Grand Staircase-Escalante National Monument, by half.

Utah’s GOP lawmakers who had opposed the monuments, calling them a federal land grab, hailed the reduction. But it was more an issue of partisanship than state power. The public overwhelmingly opposed the proposal to shrink the monuments, and the Native American tribes who spent years fighting for the designations in the first place are now fighting to restore them to their original size.