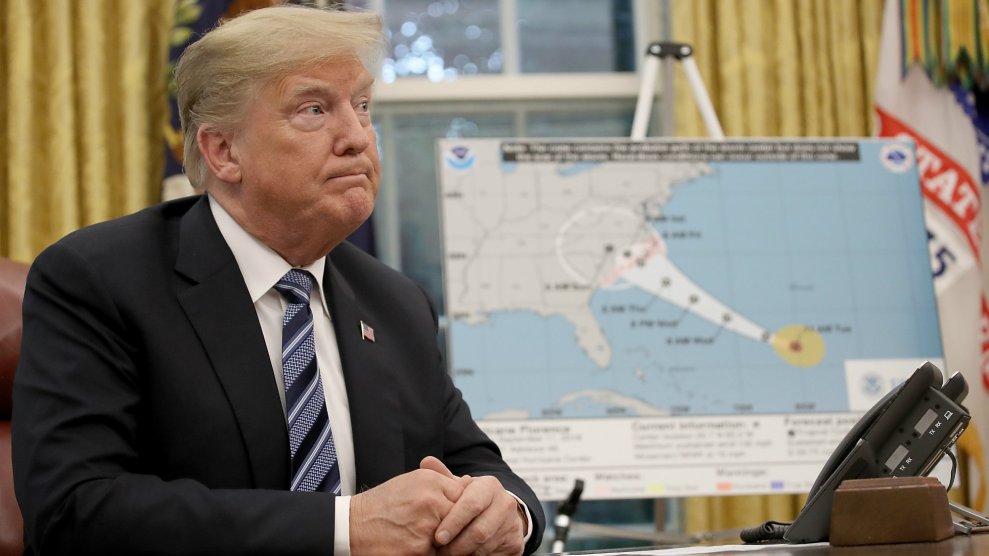 “We got A Pluses for our recent hurricane work in Texas and Florida (and did an unappreciated great job in Puerto Rico, even though an inaccessible island with very poor electricity and a totally incompetent Mayor of San Juan),” he tweeted Wednesday morning.

We got A Pluses for our recent hurricane work in Texas and Florida (and did an unappreciated great job in Puerto Rico, even though an inaccessible island with very poor electricity and a totally incompetent Mayor of San Juan). We are ready for the big one that is coming!

Trump has repeatedly praised his administration’s work in Puerto Rico following Hurricane Maria, calling it an “incredible, unsung success” and “one of the best jobs that’s ever been done.” That argument defied the nonpartisan Government Accountability Office’s own postmortem of the actions taken last year by the Federal Emergency Management Agency. The report, which was released last week, found that FEMA employees were “overwhelmed” by the challenges of responding to hurricanes in the Caribbean, Texas, and Florida while managing a horrific wildfire season in California. At one point last October, the report noted, 54 percent of FEMA employees were not qualified for their assigned roles. FEMA Administrator William “Brock” Long acknowledged the stress employees were under during a congressional hearing last November, saying, “My staff is tapped out.”

Trump’s tweet Wednesday also escalated his war of words with San Juan Mayor Carmen Yulín Cruz, a perennial target of the president’s ire. Cruz had lobbed two attacks at Trump on Tuesday night. Earlier in the day, Trump had cited Puerto Rico’s poor electric grid as a reason for the humanitarian disaster, which killed 2,975 residents, according to the official count. “It was in very bad shape, it was in bankruptcy,” he said.

Cruz, a vocal critic of the president’s leadership during Hurricane Maria, responded with two tweets:

2,431 applications for funeral assistance were submitted to @fema after María. Only 75 approved. Oh yes Mr Pres another sign of success?

Pres Trump thinks loosing 3,000 lives is a success. Can you imagine what he thinks failure looks like?

In other tweets Wednesday morning, Trump promised that “FEMA, First Responders and Law Enforcement are supplied and ready” for Hurricane Florence, and he leveled another attack against Special Counsel Robert Mueller’s investigation into Russian meddling in the 2016 election. “Russian ‘collusion’ was just an excuse by the Democrats for having lost the Election!” he wrote.