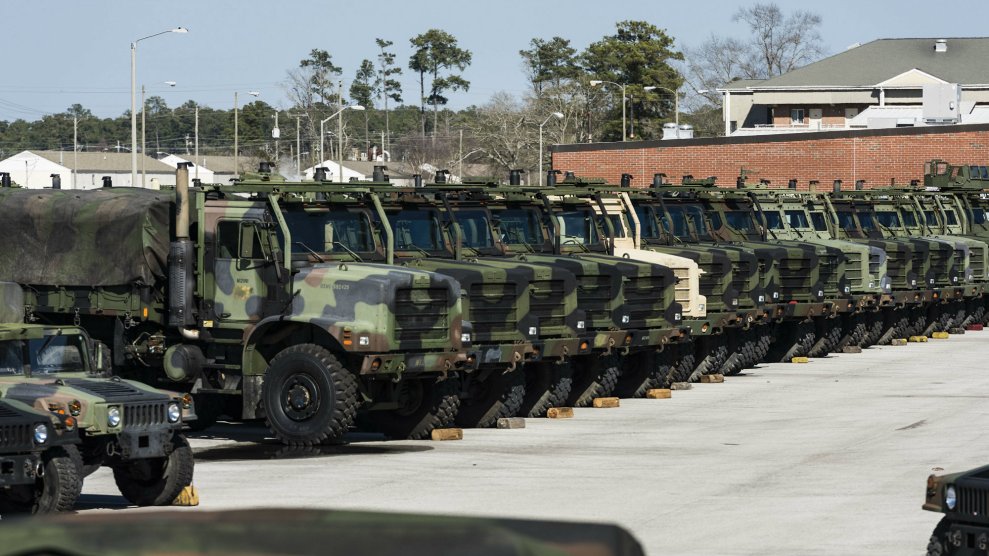 More than 1 million people were ordered to evacuate their homes this week in advance of one of the strongest hurricanes to hit the East Coast in over a decade. Among those evacuees are thousands of US military personnel across four bases in North Carolina, South Carolina, and Georgia, each of which is under some type of evacuation order.

But Camp Lejeune, the Marine Corps’ largest base in the region, lies on the North Carolina coast and has not evacuated—despite being directly in  Florence’s path. Its commanding officer, Brig. Gen. Julian D. Alford, has insisted that the base can withstand the flooding and high-velocity winds. In a Facebook post on Tuesday, Alford said, “This base is well-prepared to face the oncoming storm. The commands and personnel who remain are well-postured to react to situations and will be working together, like Marines always do in battle, to get through Hurricane Florence.”

Non-essential personnel were permitted to leave the base with their families to seek shelter, but the decision still received some criticism online. “My husband isn’t allowed to evacuate because his command simply won’t allow it. Even though we were willing to foot the expenses,” one commenter wrote.

A MESSAGE FROM BGEN ALFORD: There have reportedly been multiple comments that the decision to remain in place at Camp…

In an earlier post, Alford said “many evacuation routes are vulnerable to flooding” and the base would be safe given its “hardened infrastructure” and range of emergency supplies and medical care. “Camp Lejeune has endured countless destructive weather events over its 77 year history, and we will withstand the tough conditions ahead,” he added.

Nat Fahy, a base spokesman, said in an email to Mother Jones that typically there is “a remain-behind element of mission essential Marines necessary for to keep the base running and conduct recovery operations when the storm passes.” These service members, in addition to single Marines who do not own vehicles, “are electing to shelter in place at the barracks which are brick structures built to hurricane strength,” Fahy added. Anyone in a low lying area was moved to higher ground or evacuated.

A military installation at Parris Island in South Carolina, where the Marines have a training depot, had ordered service members to evacuate earlier this week, but the commanding officer rescinded the order on Tuesday evening as Florence’s expected path shifted, according to the Marine Corps Times.

A military installation at Parris Island in South Carolina, where the Marines have a training depot, had ordered service members to evacuate earlier this week, but the commanding officer rescinded the order on Tuesday evening as Florence’s expected path shifted, according to the Marine Corps Times.

Camp Lejeune and Parris Island are exceptions among military bases that are in Florence’s sights. Joint Base Charleston, near the South Carolina coast, and Joint Base Langley-Eustis in Virginia issued limited evacuation orders this week that allowed non-essential civilian and military staffers to seek shelter. Naval Air Station Oceana in Virginia Beach was under an emergency evacuation order, its commanding officer announced on Tuesday.

Virginia, Maryland, Georgia, North and South Carolina, and the District of Columbia have all declared states of emergency in the lead-up to the storm.

Florence has weakened somewhat since it shot up dramatically from a Category 1 to a Category 4 storm earlier in the week, but is still expected to bring a punishing amount of rain to an already-waterlogged region. “This is still a very dangerous storm, and you must take it seriously,” South Carolina Governor Henry McMaster said at a press briefing Tuesday. “We are in a very deadly and important game of chess with Hurricane Florence.”

As some military personnel head away from the hurricane, other state and federal service members have already been commissioned to supply food and shelter to residents affected by the storm. The Coast Guard Marine Safety Unit, based in Huntington, West Virginia, arrived in North Carolina this week equipped with pumps “designed to gain quick access to neighborhoods and divert floodwaters in the event of a rescue,” the Charleston Gazette-Mail reported.

They will have plenty of company. More than 10,000 National Guard members are on duty during the storm, including support teams from states that are far away from Florence like Pennsylvania, Connecticut, and Alaska.