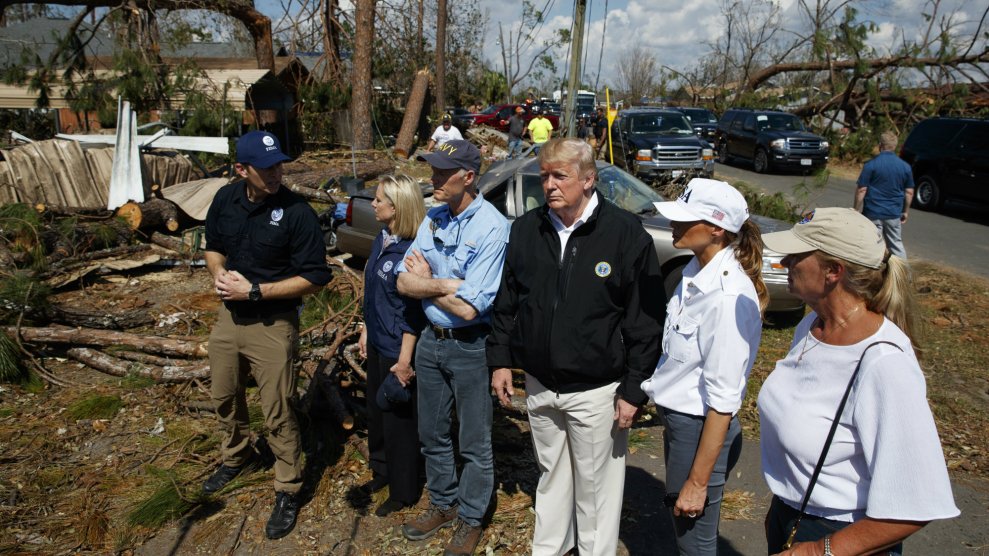 On Monday, President Donald Trump headed to Florida to tour the areas affected by Hurricane Michael. Last week, the storm made landfall as a powerful Category 4 in Florida’s Panhandle, leaving behind a wake of devastation and destruction.

Will be leaving for Florida and Georgia with the First Lady to tour the hurricane damage and visit with FEMA, First Responders and Law Enforcement. Maximum effort is taking place, everyone is working very hard. Worst hit in 50 years!

He also used the opportunity to give some words of support to Republican Gov. Rick Scott, who is running for Senate, saying he did an “incredible job” in the aftermath. The president also thanked first responders, law enforcement, and the Federal Emergency Management Agency for their efforts in the storm recovery.

“This has been the worst nightmare I’ve ever been through in my life,” Dawn Vickers, a Florida resident who rode out the storm, told CNN. The 155-mph storm made landfall in Mexico Beach, Florida, claiming the lives of 18 people so far and left 1.3 million customers in Florida, Alabama, Georgia, South Carolina, North Carolina, and Virginia without power. Mexico Beach city manager Tanya Castro has said that it could take up to 18 months before the town is up and running again. Officials have estimated that close to 300 people did not heed evacuation warnings.

Before and after images show there's nothing left in some parts of Mexico Beach, Florida https://t.co/Veqr8xmwMQ pic.twitter.com/1KDHOHbVui

The extreme winds and storm surge destroyed homes and businesses along the coast. In Panama City, which did not fare much better than Mexico Beach, power companies are scrambling to get lights back on for its customers, but acknowledged that it could take a long period of time. “There’s no timetable other than we believe it’ll be weeks,” Jeff Shepard, a spokesperson for Gulf Power told the Panama City News Herald. “It’s a total system rebuild for the hardest-hit areas of Bay County.”

Footage shot by a TV crew in Panama City gives a sense of the damage in the aftermath of #HurricaneMichael, the worst hurricane to hit the Florida Panhandle since the mid-1800s, according to FEMA officials. https://t.co/Xnj5eFo0zF pic.twitter.com/LI0IS4Ze6S

Nearby in Lynn Haven, which also suffered severe damage from the storm, Cassidy Nelson, the owner of Sonny’s Real Pit Bar-B-Q opened his doors to hungry Floridians over the weekend. “All of my family is here serving,” he told the News Herald, “I just wanted to help the community.”

As washed out roads and downed power lines make it difficult for officials to bring in supplies for survivors, FEMA has set up food and water distribution points around the region. So far, the agency has distributed 700,000 meals and one million liters of water.

Hurricane Michael also wreaked havoc on Georgia as the first major hurricane to hit the state in more than a century. A Georgia town more than 100 miles inland suffered catastrophic damage. An 11-year-old girl was killed when storm winds ripped through her grandparent’s home. Hundreds of thousands of customers were left without power after Michael’s 115-mph winds destroyed homes and businesses and closed down roads in the state.

Early estimates have put damages in the $8 billion dollar range, which would make Hurricane Michael the 12th billion-dollar disaster in the United States this year.