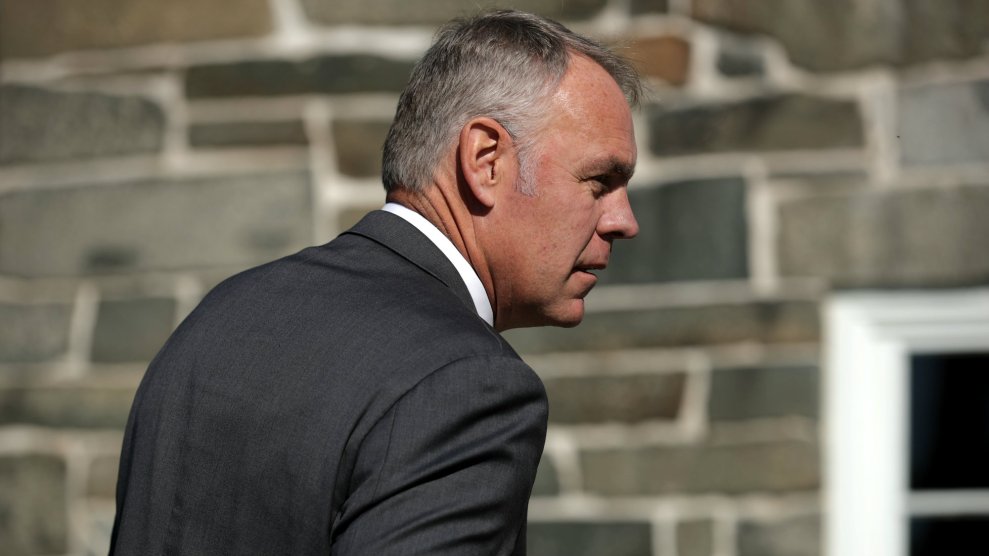 The Interior Department’s internal watchdog has referred one of its probes into agency chief Ryan Zinke‘s conduct to the Department of Justice, the Washington Post and CNN have confirmed.

Zinke has faced at least 18 formal investigations—many of them ongoing—and calls for several more. While it’s unclear which investigation the Justice Department has taken over from the Interior Department’s internal watchdog, the Office of Inspector General, the move signals that there may have been criminal violations, the Washington Post notes.

Zinke told CNN he hasn’t heard from the Justice Department.

“It will be the same thing as all the other investigations,” he told CNN. “I follow all rules, procedures, regulations and, most importantly, the law. This is another politically driven investigation that has no merit.”

A DOJ spokeswoman said in an email Tuesday that the department “generally does not confirm, deny or otherwise comment on the existence or non-existence of an investigation.” The Interior Department did not immediately respond to HuffPost‘s request for comment.

The news comes just two weeks after the Hill and other media outlets reported that a Trump political appointee at the Department of Housing and Urban Development, Suzanne Israel Tufts, was set to replace Mary Kendall as head of the Office of Inspector General. But Interior Department spokeswoman Heather Swift denied the story, saying the media had jumped to conclusions.

Jennifer Rokala, executive director of the Center for Western Priorities, a Colorado-based advocacy group, said in a statement Tuesday that Zinke has “repeatedly leveraged his office for personal gain, attracting unprecedented scrutiny from government investigators.”

“The timing of Secretary Zinke’s attempt to remove Interior’s acting Inspector General and replace her with a political appointee earlier this month raises serious questions about whether the secretary was trying to dodge scrutiny. If Interior’s Inspector General is unable to hold Secretary Zinke accountable without political interference, it’s time for career prosecutors at the Justice Department to take over.”

At the center of Zinke’s current ethical troubles is a development project in his hometown of Whitefish, Montana. As Politico first reported in June, the project involves a foundation Zinke started and was president of before resigning to take over Interior, and it’s backed by Halliburton Chairman David Lesar. Zinke and his wife could stand to benefit financially if the deal goes through.

House Democrats later revealed that Zinke met with the project’s developers in his government office last summer, and they called on the Interior Department’s internal watchdog to investigate whether Zinke had violated ethics rules by using taxpayer resources for personal financial gain. The Office of Inspector General launched a full investigation on July 16.

The agency watchdog is also looking into Zinke’s role in the Trump administration’s rollback of Grand Staircase-Escalante National Monument’s boundary in Utah and the Interior Department’s decision to block two tribes’ application to open a casino in Connecticut.

This month, the Office of Inspector General determined that Zinke had violated government travel policies by bringing his wife along on taxpayer-funded trips and by asking staff to explore making her a department volunteer, a move that would have legitimized her travel. That probe also found that the Interior Department spent $25,000 to send a security detail with Zinke and his wife when they vacationed in Turkey and Greece, but that doing so did not break any rules.