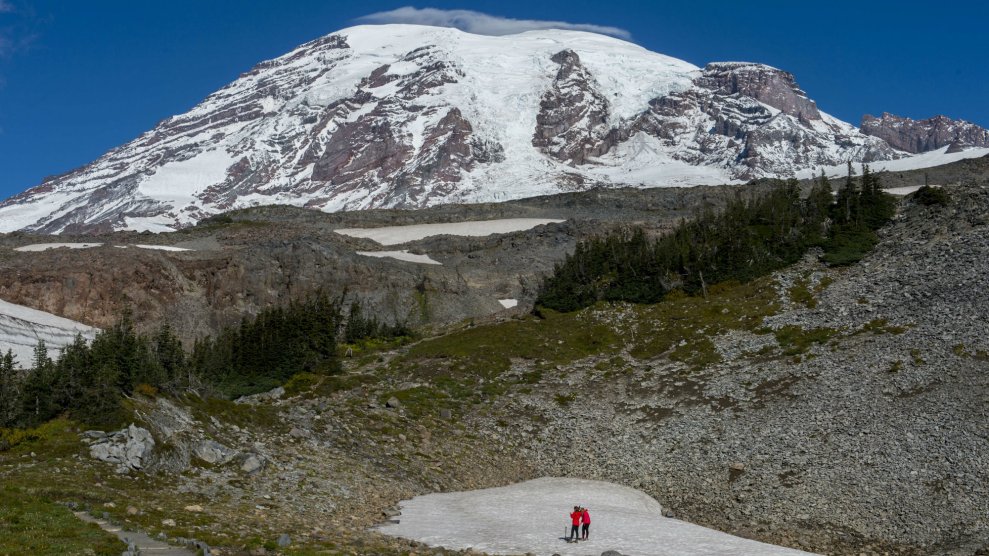 MeadoWatch is a program that enlists volunteers to collect wildflower data on hikes at Mount Rainier National Park. Volunteers say it provides an opportunity to inject much-needed scientific data into political discussions about climate changeWolfgang Kaehler/LightRocket via Getty Images

Most hikers on the Reflection Lakes trail have their cameras pointed at Mount Rainier; Karen Sy, however, had her back to the imposing mountain. Instead, she examined a patch of spindly, tufted plants that look like Dr. Seuss’ truffula trees. In any case, Rainier looked hazy; choking wildfire smoke had pushed air quality readings into the “unhealthy” range for days. Luckily, Sy had come prepared with an N-95 respirator mask, so she could concentrate on writing down her observations: Western anemones, in their fruiting stage—typical for mid-August.

She’d braved the smoky weather for MeadoWatch, a program that enlists volunteers to collect wildflower data on hikes at Mount Rainier National Park. Three volunteers at a different plot told me that they find the program rewarding, in part because it provides an opportunity to inject much-needed scientific data into political discussions about climate change. Rather than agonizing over struggling animal species and changing ecosystems, recording observations feels like a proactive step to stave off climate dread.

The program also has the power to expand volunteers’ ideas of who can be a scientist. Joshua Jenkins, MeadoWatch’s program management intern, is a prime example: When lead researcher Janneke Hille Ris Lambers hired him, he was the first intern on the project who didn’t have a science background. “Janneke talks about reimagining who can be a scientist, and I think that message is really powerful,” he said.

Hille Ris Lambers, who studies the effects of climate change on plants at the University of Washington, launched the program in 2013. She initially turned to citizen science as a means of maximizing data collection; this year, she estimated that the program’s 142 volunteers will make around 10,000 observations. “As a scientist, I love nothing more than data,” she said. But perhaps the most rewarding part has been getting to know the volunteers. “We don’t keep official numbers on it, but I know of at least a couple volunteers who have gone back to school to get a degree in science.”

To entice volunteers and collect quality samples, Hille Ris Lambers selected hikes the way Goldilocks picked her porridge: She chose two trails that were known for their wildflower blooms but were not too popular, and that span a range of elevations but are not too steep. Hikers stop at predetermined plots, marked by neon orange tokens, and jot down the flower species they see, as well as the plant’s life cycle stage—whether it is budding, flowering, fruiting or seeding.

In aggregate, these observations will give researchers a clearer picture of how plants’ life cycles will change in response to climate shifts. “If snow melts earlier, on average, wildflowers are going to bloom earlier,” Hille Ris Lambers explained. That will have cascading effects for the surrounding ecosystem; for instance, if some flowers bloom earlier, the animals that eat those plants may need to adjust their behavior accordingly—or develop a different diet.

Hille Ris Lambers was hesitant to report any definitive conclusions based on the project’s six years of data, but hikers on the trail had their own anecdotes about how the plants’ environment is changing. On the way back down to the trailhead, I ran into two of Sy’s friends, who had decided to take it slow on account of the wildfire smoke. One of them, Dan Paquette, who has hiked around Rainier as a volunteer for MeadoWatch and other programs for 20 years, told me that he’d never seen it so dry and hot. According to a National Park Service report on Mount Rainier’s climate, that trend will continue; the average temperature is projected to increase by another 3 to 7 degrees Fahrenheit by the end of this century, causing drier summers and wetter winters.

Paquette also noted that the area where we stood was usually filled with lupines, as far as the eye can see. He was not the only one who noticed; all six volunteers on the trail that day asked Jenkins about it. The lupines we did see were struggling; at one plot, Jenkins pointed out some yellowing leaves, crisp and withered as a neglected houseplant. “This stuff is definitely dying,” he said.

While the lupines felt like a gloomy presage, the joy of the volunteers was apparent. Despite the smoky haze visible on the trail and palpable in the lungs, the atmosphere was less suffocating than it was in Seattle. After volunteers Pat Cirone, Elly Adelman and Dana Davoli identified a north microseris seedpod, they cheered and laughed. “It’s the excitement of the chase,” joked Adelman. Plus, Davoli said, the trail provided a welcome reprieve from the dismal headlines the volunteers encounter in everyday life. “Everything is so negative right now politically, and to do something positive is so nice.”