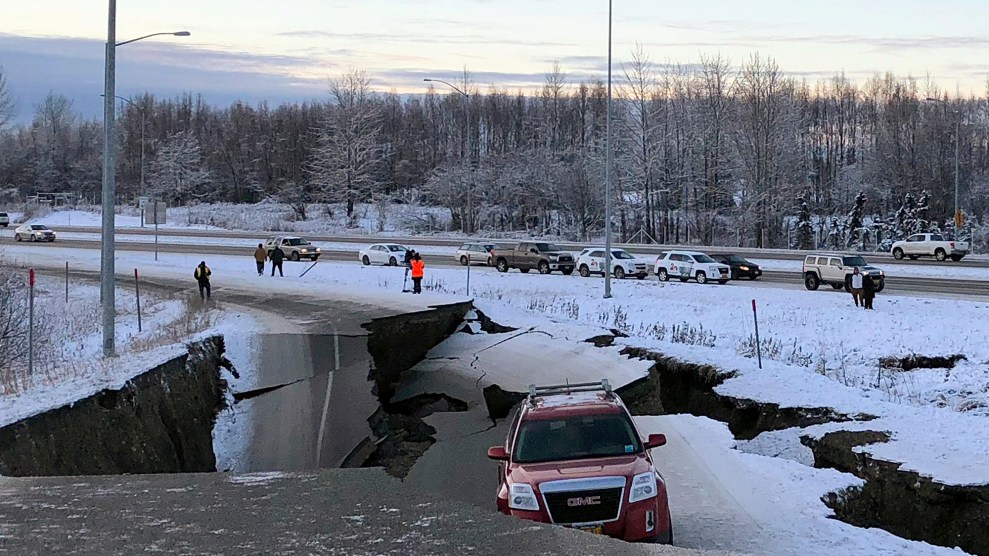 A car is trapped on a collapsed section of road in Anchorage, Friday, Nov. 30, 2018. Dan Joling/AP

A powerful 7.0-magnitude earthquake struck just north of Anchorage on Friday morning, damaging buildings and roads in Alaska’s largest city. The quake left up to 10,000 people without power and briefly led to a tsunami warning, which was later canceled. Residents continued to feel the aftershocks on Friday, some with a magnitude greater than 5.0, but no major injuries or fatalities have been reported as of yet.

Vine Road, south of Wasilla, was heavily damaged in by the #akearthquake. An aerial view today. pic.twitter.com/m9Qhr0rdzg

About a mile from my house on Vine rd between KGB and Parks. #Alaskaearthquake #earthquake #alaska pic.twitter.com/5HnpXKGZUw

Video from @HoskenB of @DimondStudGov hallway.
"I was standing right in the middle of the gym when it hit. After a few seconds we started to clear the gym. I could see waves moving across the floor." @HoskenB #AkEarthquake @Ch2KTUU pic.twitter.com/kUl4AdwIlr