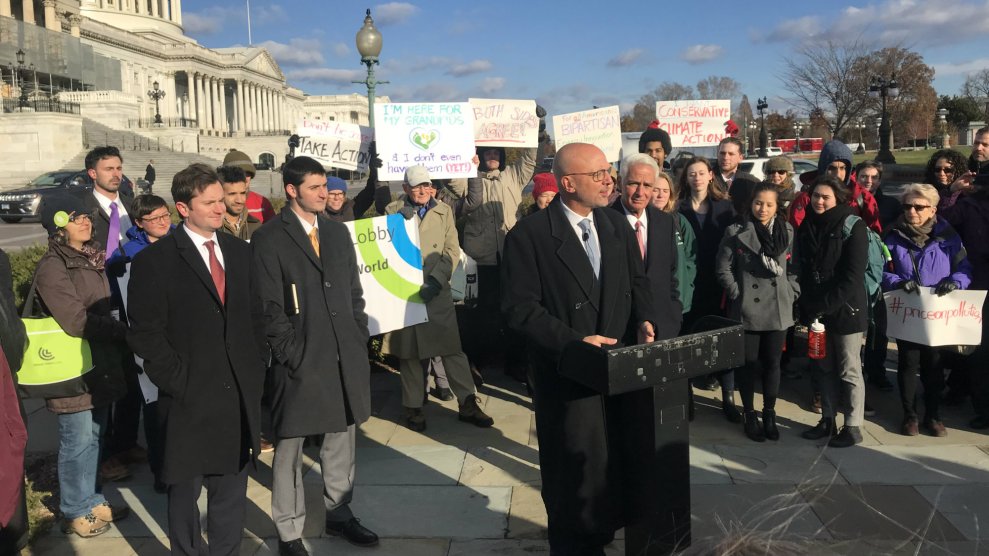 Three Democratic and two Republican House members introduced a bipartisan carbon tax bill this week, a long-shot attempt they said would “plant a flag” for next year’s divided government to move forward on climate change legislation.

The Energy Innovation and Carbon Dividend Act is the most significant piece of legislation to emerge from the 90-member bipartisan Climate Solutions Caucus since its creation nearly three years ago. Appearing at a press conference Wednesday to announce the measure, Ted Deutch and Charlie Crist, both Florida Democrats, cited the recent UN climate report and the Trump administration’s national climate assessment as reasons for co-sponsoring the bill, which would set a $15-per-metric-ton fee on carbon dioxide emissions that would increase by $10 each year.

“The status quo is not sustainable. It’s not survivable,” Deutch said. The bill reflects “rigorous negotiations between Democrats and Republicans,”he added and demonstrates a compromise between left-leaning environmental advocacy groups and supporters of a business-friendly, free-market approach.

In addition to the fees imposed, the bill also would repeal redundant environmental regulations governing greenhouse gas emissions, while all net revenues would be distributed as a rebate to offset the increased cost of fossil fuels. Total carbon emissions would decrease by 33 percent in 10 years with the goal of a 90-percent reduction by 2050, lawmakers said.

The proposal would “provide a substantial boost to low carbon generation sources including solar, wind and nuclear energy, and virtually eliminate the use of coal in the US electricity system by 2030,” according to an independent assessment conducted by researchers at the Center for Global Energy Policy at Columbia University.

But will it be able to attract any Republican support in the next Congress?

Early signs are not promising. More than 94 percent of House Republicans voted for a resolution in July that condemned a carbon tax “as detrimental to the United States economy”—and that included 39 of the 45 GOP members of the Climate Solutions Caucus. The resolution came on the heels of two other notable plans to tax carbon, one in the Senate spearheaded by Sen. Sheldon Whitehouse (D-RI). In the House, Rep. Carlos Curbelo (R-FL), who co-chaired the climate caucus with Deutch, proposed a measure that would have taxed emissions at a rate of $24 per metric ton, but it failed to attract widespread support. The Florida congressman lost a close reelection race this month, leaving the future of the group’s Republican leadership in doubt. At least a dozen other Republican caucus members are retiring or were defeated in their reelection bids, including Barbara Comstock of Virginia and Dan Donovan of New York.

Even Republican co-sponsors Brian Fitzpatrick and Francis Rooney, who represent districts in Pennsylvania and Florida respectively, skipped out on the event for their own bill, due to what Deutch described as “some scheduling conflicts.” (A Democratic co-sponsor, Maryland’s John Delaney, also missed the event.) A spokesperson for Fitzpatrick did not respond to a request for more specifics about his absence, but Chris Berardi, Rooney’s communications director, said the congressman had an event in the morning at the United States Institute of Peace on his schedule “for many weeks.”

House Republican leadership has not indicated that they would change course so soon after condemning the idea of a carbon tax, but the bill’s supporters remain optimistic. “We can’t wait for the ideal Congress or the ideal president,” Steve Valk of Citizens’ Climate Lobby, whose members joined Deutch and Crist for the press conference, tells Mother Jones. He said the group would be “aggressively lobbying” members of the House Ways and Means Committee if the bill is debated there. The Climate Leadership Council, which launched last year in support of a “conservative case for carbon dividends,” has also backed the new bill. Founder Ted Halstead called it a “clear proof of concept that a conservative-inspired dividends framework can attract bipartisan support.”

That support will have to overcome considerable opposition from the fossil fuel industry, which spent more than $31 million to defeat a similar measure in Washington state, to say nothing of skepticism from the more liberal freshman members of the House Democratic caucus. Even though the Columbia University report found that the proposed fee could climb to $100 per metric ton by 2030, it is still a much less aggressive starting point than the $50 tax that Whitehouse proposed and Curbelo’s $24.

“This carbon tax bill amounts to climate denial, not climate action. Emissions pricing schemes like this one are actually supported by the world’s largest oil and gas corporations because they do nothing more than entrench the status quo – an economy dependent on polluting fossil fuels,” Wenonah Hauter, executive director of environmental group Food & Water Watch, said in a statement. “This particular bill is potentially even more egregious, as it would reportedly roll back existing environmental regulations on carbon emissions, amounting to a shameful, self-defeating giveaway to the industry.”

All of which is to say the bill will face more than its fair share of problems en route to even a committee vote, let alone passage in the Senate or Trump’s signature. The World Resources Institute, whose Global Climate Program contributed to the Trump administration’s national climate assessment, perhaps put it best in a Tuesday blog post on the group’s website: “We must be realistic: there’s little chance this specific bill could become law.”

Read the full text of the bill here: