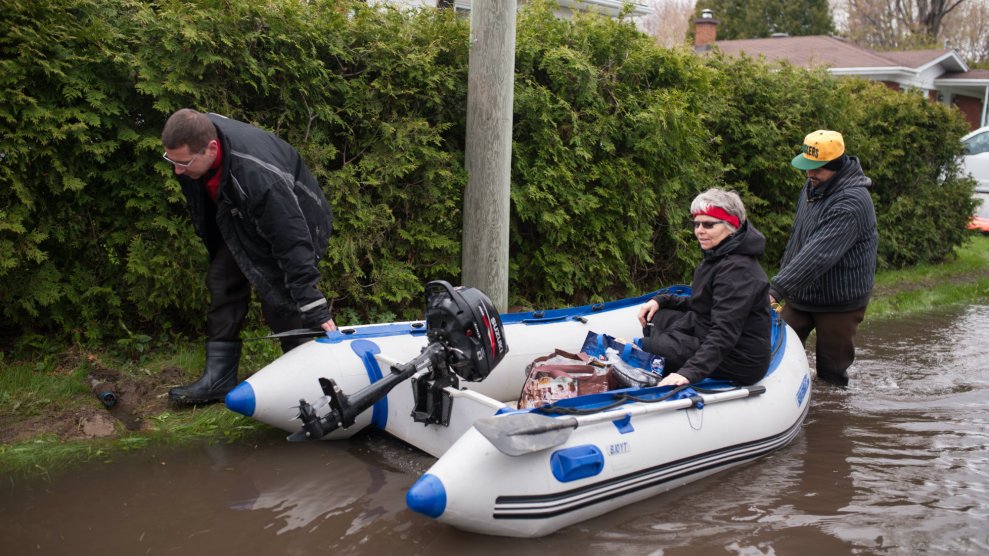 A resident is evacuated from the flooded Montreal borough of Pierrefonds in May 2017.Catherine Legault/AFP/Getty Images)

A network of young people in Quebec have applied to sue the Canadian government for failing to get tough on the carbon pollution that is heating the planet and putting their futures in jeopardy.

Environnement Jeunesse applied Monday to bring a class action lawsuit against the Government of Canada, on behalf of all Quebecers aged 35 and under. The group is being represented pro bono by Montreal-based law firm Trudel Johnston & Lespérance.

A Quebec Superior Court judge will now have to decide whether to authorize the class action before the group can move forward with a trial, Anne-Julie Asselin, a lawyer at the firm, told National Observer. She expected that this step would take about a year.

The moves comes after thousands of Quebecers mobilized to demand measures to fight climate change, like halting all new fossil fuel exploitation in the province.

The world must drastically cut its emissions each year, until they are roughly half of 2010 levels by 2030, in order to avoid damage to ecosystems and irreversible changes to the climate, according to the United Nations Intergovernmental Panel on Climate Change (IPCC).

That means emissions in Canada will have to be cut by hundreds of millions of tonnes a year, to about 385 million tonnes, according to a calculation by the Canadian Press.

The Trudeau government is moving to implement a price on pollution nationwide, and has undertaken several other measures to cut down on greenhouse gas emissions like moving to tighter building codes and investing in green transit infrastructure to take cars off the road.

But Ottawa’s official carbon pollution reduction target—cutting emissions 30 per cent below 2005 levels by 2030—is only projected to hit 512 million tonnes, which is above the IPCC number. Plus, a 2018 report to the UN showed the country will miss even this target without stricter measures.

“Instead of accelerating a green transition, Canada is subsidizing oil companies and purchasing a pipeline in our name,” said Environnement Jeunesse executive director Catherine Gauthier, in a press release from the group.

“We demand that our rights and those of future generations be protected and respected. We demand that Canada act without delay to avoid dangerous global warming, above 1.5 degrees Celsius, as recommended by the IPCC.”

The group is hoping to emulate the success of the Urgenda Foundation campaign in the Netherlands, whose case forcing the Dutch government to accelerate its emissions cuts was upheld in a Hague court last month. The severity of the climate crisis demands that the cuts be deeper, judges there ruled.

The firm has pointed to several examples of how weak climate targets infringe on rights in Canada. The right to life, integrity and security of the person, for example, is protected by section 7 of the federal charter and section 1 of the Quebec charter.

Asselin from Trudel Johnston & Lespérance said at this point there was no date yet for a hearing or a decision on whether the suit can proceed.

Once the class action is authorized, it is expected to proceed to pre-trial examination, requests for documents and preparation of expert reports, added Asselin. At that point, dates can be set for trial. Asselin said it was difficult to put a timeline on the whole process, but a rough guess would be two to three years.

“What is absolutely certain is that we will push the file as much as possible because we know that the matter is urgent,” she said.

Greenpeace Canada said it supported Environnement Jeunesse in its effort. “No one should be surprised that today’s youth are demanding greater action to protect the planet they will inherit,” said spokeswoman Loujain Kurdi.

“Governments have acted far too slowly so we must now use all possible means, including lawsuits, to launch a true transition to a low-carbon economy. In 2030, I’ll be in my 40s, and a child who is 10 years old today will enter adulthood and be forced to live with more extreme weather.”