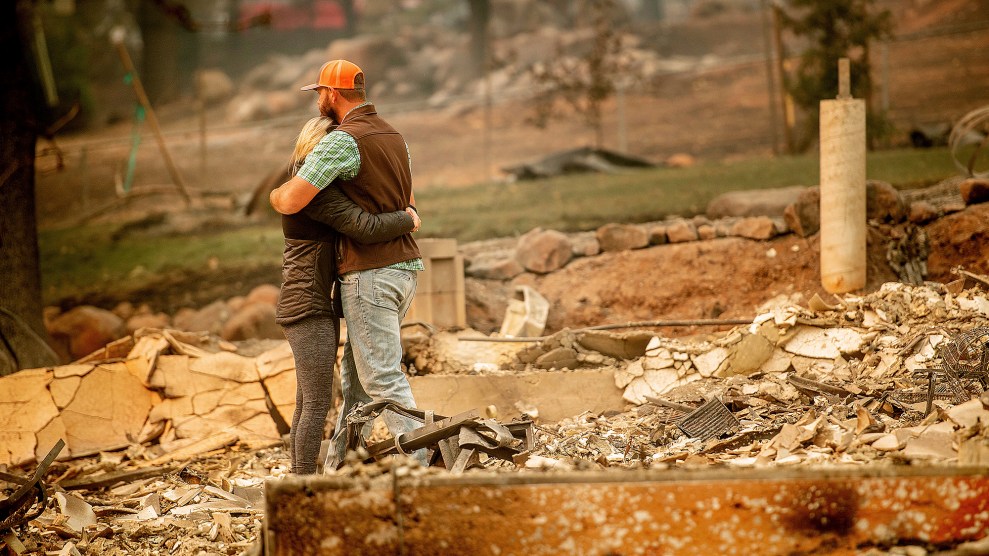 Chris and Nancy Brown, who escaped the Paradise fire with their two-year-old and their dogs, console each other in the wreckage of their home. Noah Berger/AP

A fine sentiment. But these things are just not very useful and require too much work to sort through and distribute.

If you really want to help survivors of a catastrophe like the Camp Fire in Paradise, the Woolsey Fire in Southern California, or the devastating Sonoma fires of a year ago, give cash to larger local organizations that know their communities and are well positioned to dole it out to groups that work directly with survivors who need shelter, cots and bedding, hot meals, prescriptions, baby supplies, and transportation—because their cars have been reduced to charred hunks of misshapen steel and aluminum. Survivors also need money and long-term help, because many lost everything. The Camp Fire killed at least 85 people—more than 150 remain unaccounted for—and wiped out 13,972 homes, 538 commercial structures, and nearly 4,300 other buildings.

My wife and I gave to the North Valley Community Foundation (NVCF) in Chico, a key player in the Camp Fire relief effort. “We are literally making sure individuals are being provided with services directly related to their basic human needs—shelter and food and supplies,” Alexa Benson-Valavanis, the foundation’s CEO, told TV/radio host Sonali Kolhatkar this week. “We’re providing resources to any of the organizations that are giving cash assistance to the people displaced by the fire, and we’re also actively facilitating and distributing gift cards to various shops in the local community and also Visa cards to make sure people have enough food for today, clothing for today. And we will shift to the long-term recovery phase here in the next couple of weeks, hopefully.”

Survivors need money now, but also need long-term assistance, which “can mean anywhere from 5 to 10 years.”

As of Wednesday, Benson-Valavanis said, some 550 people remained in temporary shelters set up immediately after the Camp Fire. Others were living in tents as heavy rains swept into to the area. NVCF is now working closely with FEMA and with Butte County to determine what the transitional housing situation will look like: “We are in a rural community and there aren’t a lot of hotels and motels available to begin with, so the challenges are steep,” Benson-Valavanis said.

One thing to think about is short-term vs long-term relief. The news cameras come to town and everyone donates. Then the cameras go away and the cash flow tapers off. But people’s needs are still epic. They have to find stable living situations, clear and assess their burned-out properties, and start rebuilding homes and dealing with insurers, architects, contractors, government agencies, and lots and lots of paperwork. There are medical and legal issues. Possibly funerals to arrange. Childcare to deal with. There are all kinds of lingering mental health problems and difficulties finding new work. A person has to eat, too.

Community Foundation Sonoma was well positioned to help when the Sonoma fires broke out late last October, but it had never dealt with anything of such magnitude. The foundation’s first step was to talk to its counterparts in places that had experienced major disasters—New Orleans, Houston, Puerto Rico, New York City. “They all kind of gave us the same advice, which was that somebody needed to be doing long-term funding,” says communications director Caitlin Childs. “So that’s how we ended up forming our Resilience Fund in the days immediately after the fire.”

CFS has raised about $14 million to date, and has held on to most of it for long-term efforts while other funders focused more on the short-term needs. “We learned that long-term can mean anywhere from 5 to 10 years,” Childs says.

FEMA requires disaster-stricken communities to create a long-term recovery committee that typically consists of local nonprofits and works directly with families on a case-managed basis. There are more than 700 such cases still in the pipeline in Sonoma County, each with its own unique challenges. One man, Childs recalls, made his living building theater sets. He lost his rented home, his truck, and all of his building materials in the flames: “Losing his tools meant losing his ability to work. He found a place to live, but he needed to replace thousands of dollars worth of tools.”

The Sonoma fires destroyed 5,300 homes. More than a year later, only 106 have been rebuilt.

Housing is a massive challenge. The Sonoma conflagrations destroyed 5,300 homes. More than a year later, just 106 have been fully rebuilt, according to Childs, and “only 43 percent are even in the process of having applied for a permit.” That’s worrisome because most insurers only cover two years of housing for fire victims. When the coverage lapses, and those houses aren’t ready, a lot of families could be in trouble: “There’s going to be a pretty major effect when we hit October of next year,” Childs says.

As part of its long-term efforts, CFS supports Legal Aid of Sonoma County and United Policyholders, a nonprofit that’s also active in Butte County (where Paradise is located) that offers insurance assistance for  people in need. Paradise victims can seek free legal help from Legal Services of Northern California.

Another helpful nonprofit, particularly for immigrant families unwilling or unable, because of undocumented family members, to seek help from FEMA, is California Human Development. The United Way of Greater Los Angeles, meanwhile, has created a fund to give long-term help to victims of the Woolsey fire, which destroyed at least 1,500 structures and damaged hundreds more in Malibu and Ventura County.

Another group working in all three places is the Tzu Chi Foundation, an international disaster-relief group. “They come into communities after disasters and do both immediate and long-term case management work,” Childs told me. “We have a group of people from Tzu Chi that have been commuting as volunteers, on their own time, for over a year. They’re coming up every day of the week, an hour and a half drive, to take people to doctors appointments, make sure they get their insurance paperwork filed, all those things case managers do. I’ve been so impressed.”

We want to hear from you: How have the recent wildfires affected you? And how has your outlook on life in California changed? If you have been directly affected, or know someone who has been affected, please get in touch. You can fill out the form below, send us an email at talk@motherjones.com, or leave us a voicemail at (510) 519-MOJO. We may use some of your responses for a follow-up story.