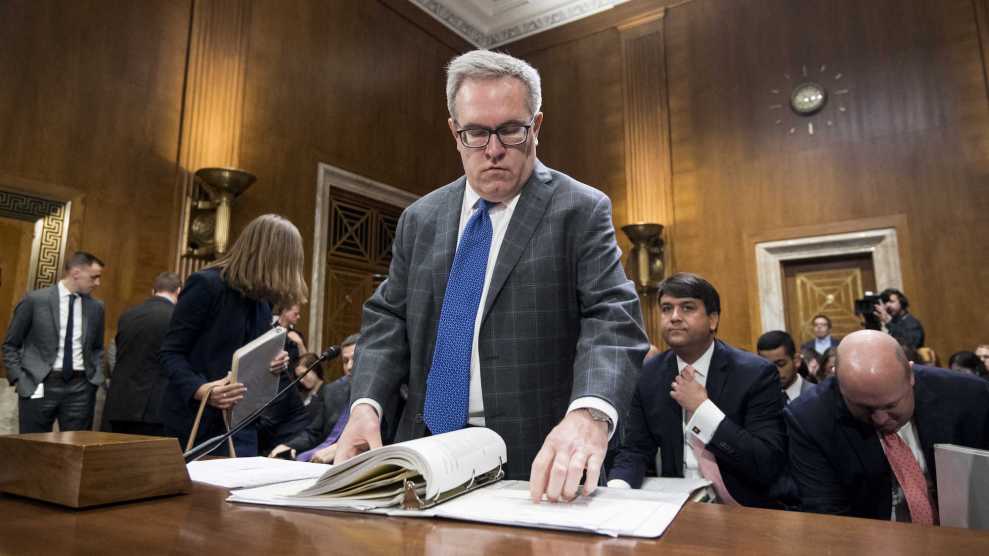 The latest is Andrew Wheeler, acting EPA administrator who has been nominated to take over for Scott Pruitt. He made sure to question the findings and the premises of the report during an interview with journalist Juliet Eilperin at a Washington Post event on Wednesday.

He was asked about how he was able to reconcile scientists’ warnings that climate change will have dire effects on virtually all aspects of the US economy and stability. Wheeler said he had “not read the entire report,” and that he did not have time to discuss it report with Trump, who has been outspoken about entirely dismissing it. Earlier versions of the assessment have long been publicly available, vetted by the EPA, and subject to a lengthy and thorough comment period. But that didn’t stop Wheeler from undermining confidence in the report and media reports, all while claiming the US is on track to meet its climate targets set out under the Paris agreement anyway. (This is simply not true.)

“I have questions about the assumptions,” Wheeler said, referring to the range of scenarios the report lays out for continuing business-as-usual on greenhouse gas pollution. “The majority of that report was written in 2016 and it was at the direction of the previous administration,” Wheeler repeated more than once, implying that it is also a political document. At one point, he even connected Tom Steyer, an outspoken critic of Trump and prominent climate advocate, to the economic finding that climate change will have more than twice the impact by the turn of the century than the total hit from the 2008 Great Recession.

Trump and the White House have been undermining the report since Friday. A White House spokesperson claimed the grim findings were “largely based on the most extreme scenario which contradicts long-established trends.” Interior Secretary Ryan Zinke echoed the same line Tuesday.

Katharine Hayhoe, a climate scientist and an author of one of the report’s chapters, tweeted, “What WH says is demonstrably false.” She explained that the scientists considered a range of scenarios from aggressive action, where the US actually releases negative carbon pollution by the end of the century to a business-as-usual scenario where emissions still climb—and right now, the worst-case scenarios seem more likely.

Moreover, the scenarios chapter in Vol 1 discussed the scenarios in detail, and it concludes that “the observed increase in global carbon emissions over the past 15–20 years has been consistent with higher scenarios (very high confidence).” source: https://t.co/ZUA5FhzXEi

The report, whose release on the Friday after Thanksgiving suggested that the Administration was trying to bury its dire findings, is part two of the fourth National Climate Assessment that federal law requires should appear every four years. It is the work of agencies across the government including NASA, NOAA, EPA, the Department of Defense, and other departments working with the Global Change Research Program. In over 1,650 pages, it lays out in extreme detail the ways climate change damages US interests across most of the economy, including trade, agriculture, infrastructure, and public health.