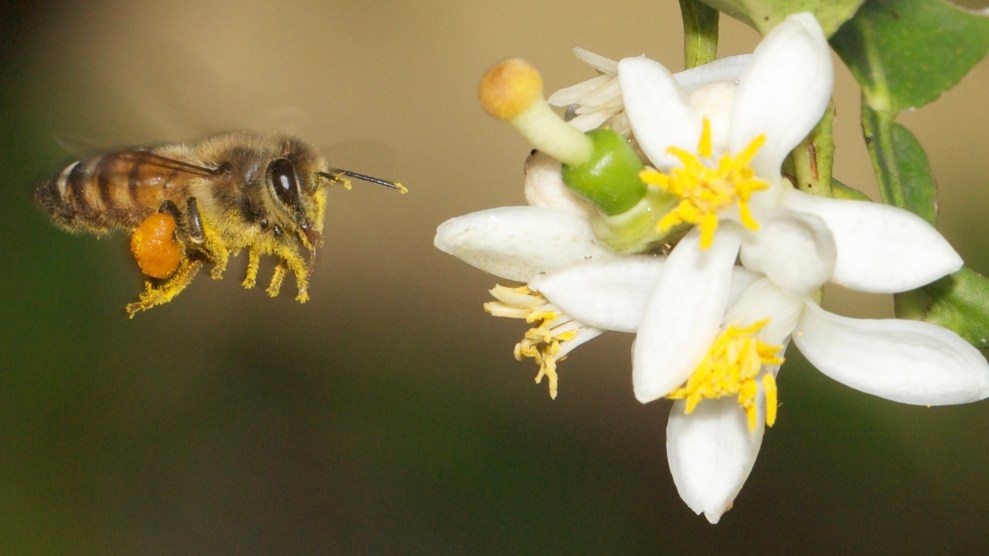 The quick succession of Hurricanes Irma and Maria knocked out Puerto Rico’s electricity and displaced thousands of people from their homes. The storms also wreaked havoc on much smaller members of the island’s population: Billions of wild and domesticated bees were uprooted or killed during the squalls and their aftermath. Now, nearly a year and a half later, bee populations are rebounding. And some researchers think their special qualities may bring new opportunities for regrowth on the island.

Beekeeper Tugrul Giray remembers the hectic days following Hurricane Maria. Wreckage from the storm blocked the way to the building where the biology professor kept his 23 bee colonies. After about four days, he was able to reach them, “but I really didn’t have ways to feed them,” he said. The hurricanes had stripped the island of vegetation, eliminating the bees’ main source of food. On top of that, a grocery shortage had Giray and other beekeepers waiting in lines to get sugar, a temporary replacement for flowers.

The Puerto Rican Department of Agriculture told reporters that about 80 percent of Puerto Rican bees perished in the storms. Giray banded together with other beekeepers and, with help from the US Department of Agriculture and a nonprofit called Pollinator Partnership, got new hives to shelter the insects and protein “patties” to fill in nutritional gaps that sugar water couldn’t. With those combined efforts, Giray estimated that Puerto Rico’s bee population has already bounced back by 50 percent, ahead of what he and his colleagues anticipated.

Giray had extra motivation to keep the insects alive. As a biology professor at the University of Puerto Rico with a focus on insects, he had been researching the special traits of Puerto Rican bees. A peer-reviewed study he co-authored that was published last year in Nature Communications sheds light on the bees’ unique characteristics. Puerto Rican bees are descendants of Africanized honeybees, also known as “killer bees.” Though killer bees possess less venom than your average honeybee, they will aggressively pursue an intruder in droves, far from the hive, to defend their territory.

Killer bees are highly resistant to the Varroa mite, a parasite that has contributed to Colony Collapse Disorder.

But they’re also productive and hardy, and less susceptible to diseases and parasites. They’re highly resistant to the Varroa mite, a parasite that the Department of Agriculture says is a contributing factor to colony collapse disorder (CCD). CCD first came to public attention about a decade ago, when honeybees started abandoning their hives and dying at an unprecedented scale. Scientists scrambled to figure out why: Currently, the USDA thinks it’s a combination of insecticides and pesticides that lower bees’ immunity; parasites (like the mite) which infect bees and hives to spread disease faster and further; and environmental stressors like drought and overcrowding when transported to pollinate farms. While bee deaths from CCD aren’t as bad as they used to be, high bee death statistics worry beekeepers and spell trouble for the crops that depend on them.

If not for their aggression, Africanized honeybees would be a beekeeper’s dream. That’s why Puerto Rican bees stand out: They have many of the same qualities as the Africanized honeybee—but they’re gentle. Giray and his fellow researchers think that the environment of Puerto Rico, a densely populated island, has bred out their aggressive tendencies, making them no more ornery than European bee varieties, with high honey yields in addition to a strong immune system.

The discovery has led the scientists to wonder: What if the Puerto Rican honeybees are part of the solution to CCD? Giray and others think the Puerto Rican queen bees could be sent to the mainland to fortify existing colonies, giving mainland bees the genetics for a better chance at long-term survival.

Jay Evans, research leader at the USDA’s Bee Research Laboratory, understands the appeal, though he cautions that there are many unknowns about this strategy. It takes labor and a lot of chemical treatments to handle the Varroa mite. “Anything that would decrease the amount of treatments they did against the mites would certainly be popular,” Evans said. “Perhaps they could get to a point where they’re sustainable without treatment. That would certainly be a big deal for beekeepers.”

Two California beekeepers, James McDonald and Patrick Cooley,* are eager to import these bees. Cooley’s past efforts to breed out the aggression from Africanized hives haven’t gone so well. He’s tried introducing a gentler European queen to a hive of Africanized honeybees, and no matter what he does, the hives kill the queen, effectively rejecting a new set of genetics. Still, his Africanized honeybees have been incredibly productive. Over the summer, Cooley, who is based in San Diego, was “actually making honey when most of the local beekeepers who have European hives are having such an incredibly dry summer. It’s a pretty huge difference.”

McDonald also keeps Africanized hives and agrees that hive productivity is booming, though he recognizes that breeding the aggression out comes with its own set of challenges. The aggression skips a generation, he says. “Even if the colony you’re giving a commercial keeper is not aggressive, you just don’t know if the children are.”

“It’s the holy grail of beekeeping.”

Exporting the bees to the mainland might also help Puerto Rican beekeepers get back on their feet. “My rough guesstimate is that it could be a $20 million industry,” Giray says. “It sounds small compared to US mainland numbers, but for this island, that will be a good amount.”

Ricardo Caraballo, one of the few commercial honey producers in Puerto Rico’s tiny honey market, is keen on the idea of shipping bees to the mainland. Caraballo and his father run Apiarios Caraballo, which sells honey to local grocery stores on top of selling equipment and developing new beekeeping farms. The family lost around 75 of its 550 hives during the hurricanes, and another 75 due to hunger and stress immediately afterward. “This is something to diversify the beekeeping industry and create opportunity for developing new business,” he says.

There are plenty of hurdles ahead. Cooley, the beekeeper in San Diego, met resistance from his county officials when he reached out about importing the bees. The bugs’ association with the killer bee “apparently gives the local people the heebie-jeebies,” he says. Officials told him he could work with a university to conduct studies to make a better case, but he doesn’t have the resources.

Since Puerto Rico is part of the United States, bees could technically be exported to the mainland without federal regulation, but Evans says individual states could reject them. McDonald thinks hobbyist beekeepers may be more on board with the idea than commercial beekeepers—a new Africanized bee, however gentle it claims to be, poses too much risk for large-scale producers.

“It’s the holy grail of beekeeping,” said McDonald. “But I mean, we have to be careful here.” It’s possible that the bees in Puerto Rico have so far avoided certain chemicals and pathogens that they’ll find on the mainland,” he explains. “It’s a miracle cure, if you can get them to survive.”