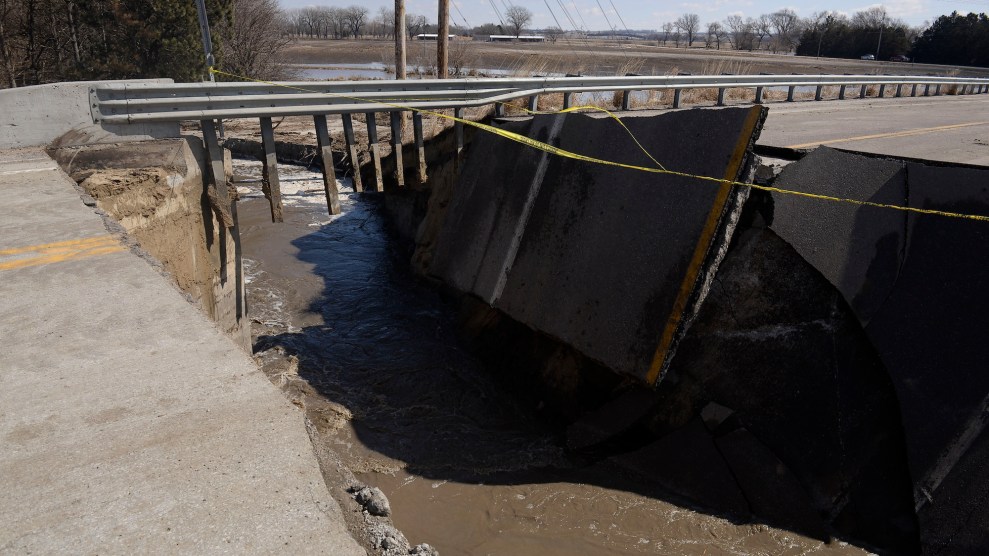 The approach to a bridge over the Elkhorn River, seen Friday afternoon leading south out of Stanton, NE, collapsed because of the flooding last Thursday.Darin Epperly/the Norfolk Daily News/AP Images

After “bomb cyclone” storms hit the Midwest last week, large swaths of Nebraska, Iowa, and Missouri farmland are stricken with floods. “Baby calves were swept into freezing floodwaters, washing up dead along the banks of swollen rivers,” the New York Times reported from the ground in Nebraska on Tuesday. “Farm fields were now lakes.” Three people have died, and in many places, “rail lines and roads that carry farmers’ crops to market were washed away by the rain-gorged rivers that drowned small towns,” the Times added.

The disaster slammed Midwestern farmers at a vulnerable time. Besieged by rising competition from growers in Brazil, they’re locked in a five-year slump of low prices for their main crops, corn and soybeans, which intensified when President Donald Trump launched a multi-front trade war last year. Farm debt has reached levels last seen in 1980, which marked the dawn of a devastating farm crisis, the Wall Street Journal reported in February. Farm bankruptcies in the region jumped 19 percent in 2018, reaching their highest level in a decade and nearly twice the 2008 rate. The floods will likely exact at least $1 billion in livestock losses and equipment damage to farms.

And severe winter and spring floods take another toll that’s much more difficult to quantify: Soil loss, on a grand scale, right in the region that provides a huge amount of our food supply. The Midwest boasts one of the globe’s greatest stores of topsoil, more than half of which has been lost in the past 50 years. Topsoil is the fragile, slow-to-regenerate resource that drives agriculture. As University of Washington ecologist David Montgomery explained in his terrific 2007 book Dirt: The Erosion of Civilizations: “With just a couple feet of soil standing between prosperity and desolation, civilizations that plow through their soil vanish.”

“Civilizations that plow through their soil vanish.”

The floods last week resulted from heavy rain hitting snow and melting it, freeing up yet more water. Because the soil was frozen, water couldn’t percolate downward as it would in warm conditions, so the resulting cascade seeks lower ground in the form of floods. When the rain hits and melts the snow, the soil’s surface layer thaws, too, and “becomes mush,” according to Iowa State University agronomist Richard Cruse. “If you step in it, it’s like walking on pudding.” Saturated with water, it’s prone to wash away.

And Cruse says these conditions are near-perfect for the formation of what are known as “ephemeral gullies“—that is, large gashes in farm fields formed by water during heavy rains, which carry away tons of prime topsoil rapidly and disperse it into streams and rivers. When Cruse drove rural roads through the farm fields outside of Ames over the weekend, he saw the tell-tale signs of gully erosion all around: impromptu ditches cut through the land, 12 inches deep and 1 to 2 feet wide, representing soil carried away by the rain.

Back in 2010, the US Department of Agriculture’s Natural Resources Conversation Service noted that “the Agency does not have a tool to predict and quantify ephemeral gully erosion,” and acknowledged that it is dramatically undercounting soil loss. As I showed in this 2014 post, gully erosion—which is massive some years and moderate others—means Iowa is likely losing topsoil on average at a rate that’s 60 percent higher than the USDA’s sustainable threshold of 5 tons per acre and 16 times higher than the natural replacement rate.

When ephemeral gullies appear before planting time in April and May, farmers tend to to fill them in by pushing in topsoil from other parts of the field, Cruse said. That topsoil is then primed to wash away next time there’s a big off-season storm.

As farmland surrenders soil, it also loses the ability to trap water, because soil acts as a sponge.

And there’s a feedback loop operating here: As farmland surrenders soil, it also loses the ability to trap water, because soil acts as a sponge. That makes it more prone to flooding, and more likely to sprout ephemeral gullies the next time a big spring rainstorm hits. As it loses capacity to hold water, highly eroded land becomes more vulnerable to droughts, like the epic one that hit the Midwest in 2012. The land ultimately becomes less productive, and farmers must add more and more fertilizers to maintain yields.

Nebraska, where rains and floods have been heavier this season, may also be experiencing gully erosion, Tom Franti, associate professor of agricultural engineering, told me. “Frankly, some of our roads were impassable due to flooding or mud, so it has been difficult to get out and about to see fields,” he said. “Ephemeral gully erosion from these rains will [likely] be out there,” he added.

Cruse and Franti both emphasized that gully erosion is preventable. The gashes form in predictable places, along contours in land. One way to prevent them is to plant permanent grass strips where they form, which allow excess water to flow over while holding soil in place. “Unfortunately, many grassed waterways have been removed over the past 10 years, so it could be a significant problem this spring,” Franti said. In a 2018 paper, Environmental Working Group researchers found that the USDA’s efforts to encourage Midwestern farmers to plant and maintain grass to avoid gully erosion have largely failed.

Off-season cover crops (like rye and hairy vetch), which I discussed at length in here and here, would also help protect soil from ephemeral gullies. While the practice is gaining popularity among Iowa farmers, cover crops were planted on just 760,000 acres in 2017, the last year for which there are numbers—less than 3 percent of total cropland in the state. The vast majority of cropland is left bare over winter.

Back in 2014, I asked Cruse how long Iowa could withstand such high rates of soil loss. He said he can’t pinpoint the year “when we cross a ‘game over’ condition.” He added: the “impact of soil erosion is a gradual decline in production potential and, probably even more important, soil resilience—the capacity of soil to supply needed water and nutrients under weather- or climate-stressful conditions.”

According to the latest National Climate Assessment, climate change has already increased the frequency of flood events in the region, and will continue to do so. “Increases in humidity in spring through mid-century are expected to increase rainfall, which will increase the potential for soil erosion,” the report states. It cites the example of the Iowa’s Cedar River Basin, where floods considered hundred-year events in the 20th century are emerging as 25-year events in the 21st century. The Cedar River was at a “major” flood stage as of Wednesday morning, according to the National Weather Service.