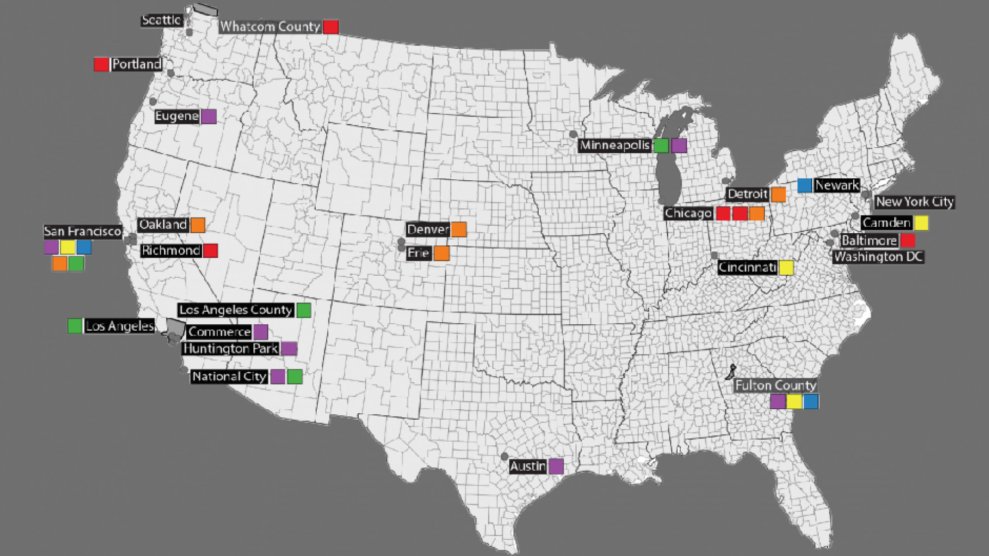 The map shows places that have environmental justice policies as identified in a new report. The New School Tishman Environment and Design Center

Just as it is now, Fifth Avenue has long been home to expensive shops drawing not only wealthy New Yorkers, but moneyed visitors. In 1916, when the shop merchants in the Fifth Avenue Association voiced concerns about congestion and declining land values affecting their profits, New York City introduced zoning as a legal apparatus. It was a new concept.

The merchants felt that their land values would be affected by the tall skyscrapers being built near Fifth Avenue to house the garment industry. And they didn’t want the people working in the garment industry to mix with their wealthy shoppers. Zoning’s beginnings had a lot to do with the exclusion of low-income people from certain areas of the city, and in the intervening century, zoning has continued to be used to confine low-income people and people of color to particular areas of a city.

Environmental hazards like waste facilities, fossil fuel storage and transportation sites, and other polluting industrial facilities, are disproportionally located in communities of color and low-income communities. But a new report from the New School’s Tishman Environment and Design Center shows how tools to enact environmental justice can come from the toolbox of injustice.

The report notes that, “examples of racial zoning are ubiquitous in planning history.” These same local zoning codes and land-use policies are now being used to address both existing and future pollution sources concentrated in low-income communities and communities of color. The report’s authors write: “If zoning and land use policies got us into this mess, they have the potential to get us out of it.”

So, what are these policies that promote environmental justice and where are they being implemented?

In 1910, Baltimore, Maryland, became the first US city to pass a residential segregation ordinance. After a 1917 Supreme Court ruling against racial segregation in housing, Baltimore employed other strategies to “exclude people of color from the financial benefits of homeownership,” according to the report. These actions laid the groundwork for today’s racial disparities in the city. In 2018, environmental justice advocates, including local neighborhood groups and national environmental groups with local chapters, successfully pushed for a ban on new crude oil terminals in Baltimore. Although federal law doesn’t allow municipalities to completely regulate commercial rail traffic, Baltimore was able to use its jurisdiction over land use and zoning for the city’s ban.

Baltimore is one of several cities (Chicago; Portland, Oregon; Oakland, California; and Seattle and Whatcom County, Washington, are others) that the report identifies as prohibiting certain land uses and industries determined to be harmful for public health and the environment. Although locally unwanted land uses (LULUs) are often associated with residents trying to guard property values and “not in my backyard” (NIMBY) sentiment, the report argues that, in communities which face environmental injustice, LULUs “take on a wholly different meaning in the context of structural racism, patterns of uneven development” as well as the disproportionate impacts from pollution.

In 2000, San Francisco launched an environmental justice program. Since then it has earmarked more than $12 million in grants for local community projects serving environmental justice areas, and allocated resources to address health inequities, air quality, and renewable and efficient energy.

And in 2010, Fulton County started an environmental justice initiative that resulted in policies requiring the health impact on minority and low-income populations to be considered in decisions about land use planning and zoning.

Most municipalities already have processes, through planning and zoning boards, in which they review new development or expansion proposals. However, not all cities consider the effect of these development proposals on vulnerable or historically overburdened communities as part of the process.

Fulton County, Georgia; San Francisco; Camden and Newark, New Jersey; and Boston University have processes in place to review at least some types of new development through an environmental justice lens.

Some cities also further environmental justice proactively through comprehensive plans (also called general plans, master plans, or land-use plans) that guide future development and establish new standards. Eugene, Oregon; National City, California; Washington, DC; and Fulton County, Georgia, all used their comprehensive plans or master plans to devise goals for working toward environmental justice. For example, in 2011, Washington, DC added a section in their comprehensive plan with policies that aim to protect all communities from “disproportionate exposure” to hazards as the city grows.

Seattle’s Public Utility Agency, which has significant land assets in historically overburdened communities, worked to make targeted investments to lessen pollution in these areas. And Los Angeles, California, used the concept of “green zones” in a 2016 policy called Clean Up Green Up Ordinance, establishing a Clean Up Green Up district within Boyle Heights, Pacoima/Sun Valley, and Wilmington, where the city applies more strict development standards for new construction and works to reduce negative health impacts. In 2017, Minneapolis, Minnesota, put forth a city council resolution aimed at green zones in order to improve heath and promote sustainable economic development.

Although the above approaches are helpful for furthering environmental justice in future development, they don’t typically apply to existing land uses harmful to public health and the environment.

Huntington and National City, California; Washington, DC; Minneapolis; and the San Francisco Public Utilities Commission all have policies targeting existing land uses. For example, National City grappled for a long time with “an excess of polluting industries due to mixed-use industrial and residential zoning,” according to the report. Now, National City has an amortization ordinance, which phases out industries near sensitive areas and includes a process for relocating businesses.

The report also notes that when it comes to decisions about where pollution and environmental hazards are located, it’s mostly up to local governments. “This localization of efforts opened up the opportunity to hold local leaders and agencies more accountable,” the authors write. “The insights gained from these policies will fuel a new era of environmental justice policies taking a holistic approach to achieving environmental justice.”