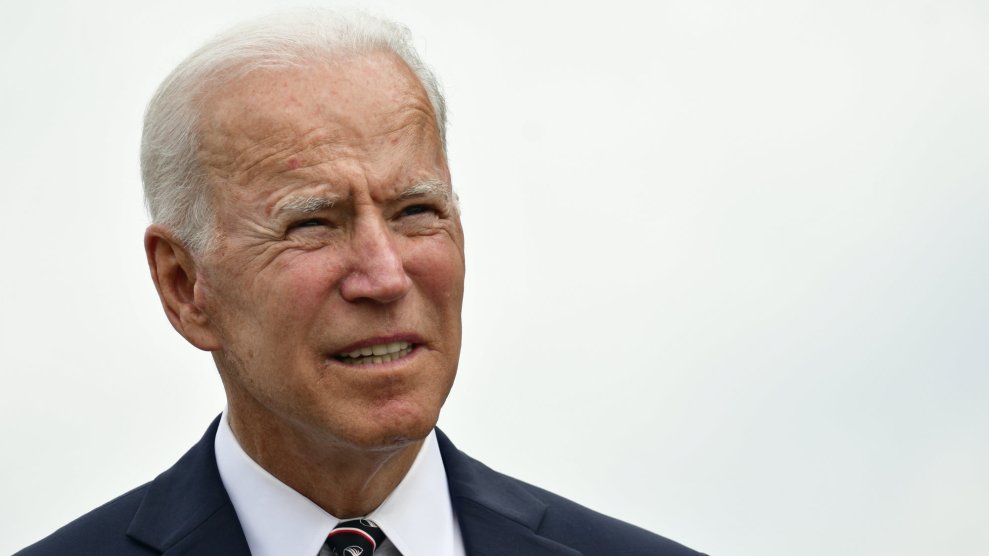 Joe Biden promised to reverse the Trump administration‘s deregulatory effort and set the United States on course to hit net-zero emissions by 2050 under a plan the former vice president put forward Tuesday as a version of the Green New Deal initiative animating many of his 2020 rivals’ campaigns.

In a 10,400-word campaign policy proposal, the presumptive front-runner for the next Democratic presidential nomination laid out plans to ramp up renewable energy and electric car investments, spurring 10 million jobs over a decade, and ending fossil fuel subsidies.

“As president, I will lead America, and the world, not only to confront the crisis in front of us but to seize the opportunity it presents,” Biden said in a campaign video. “I’ll use every authority available to me to drive progress. And I will not accept half measures.”

But the plan, teased ahead of its release as what Reuters called a “middle ground” between big business and the Green New Deal movement, offers scant details and potentially leaves room for fossil fuels. And it operates on a timeline some advocates are likely to reject as too slow to avert catastrophic warming.

The Biden plan revives the Obama-era blend of regulation and multilateral agreements, taking an all-of-the-above approach that opens the door to nuclear power and advocating wide-scale deployment of carbon-capture technology. But it goes much further with the kind of spending rarely attempted in the deficit-obsessed eight years Biden served as vice president.

The plan calls for spending $1.7 trillion over a decade, meant to spur a total of $5 trillion of investment. It includes $400 billion on increased clean energy research and the construction of 500,000 new electric car charging stations by 2030. The proposal requires new buildings to slash emissions 50 percent by 2035. It flexes considerable foreign policy muscle, highlighting levers that a Biden administration could pull at trade and international agencies to pressure other countries to cut emissions.

Biden cites the Green New Deal as a “crucial framework” and nods throughout the proposal to the potential for emissions cuts to bring jobs. But the former vice president’s plan stops short of calling for the sort of full energy transformations on which his rivals are running.

Jay Inslee, the Washington governor running exclusively on climate action, proposed a detailed $9 trillion plan to decarbonize most big sectors of the country by 2030 and listed the anti-labor law he’d repeal as a boon to workers. Sen. Elizabeth Warren (D-Mass.) is assembling a suite of wonky approaches to cutting emissions, including requiring the Pentagon to zero out emissions in the operations of the US military, one of the world’s top polluters, over a decade. Sen. Bernie Sanders (I-Vt.) is declaring war on the fossil fuel industry, throwing his weight behind the Green New Deal.

Biden sets a more flexible target for the middle of the century, giving his administration until 2025 to come up with a system to enforce emissions reductions. The 2050 target could be too late to keep warming within the range of 1.5 degrees Celsius, or 2.7 degrees Fahrenheit, above pre-industrial levels. The United Nation warned last October that to keep temperatures from reaching 1.5 degrees—for context, the world has already warmed 1.1 degrees Celsius—the world would need to cut emissions nearly in half by 2030. Developing countries like China, Indonesia and Vietnam, whose emissions are surging, are unlikely to undertake such radical cuts unless the world’s biggest historic emitter leads the way.

The Biden plan sets net zero targets—meaning emissions don’t necessarily need to be eliminated, only contained and balanced. The proposal also calls for investment in carbon capture, use and storage, an industry largely funded by oil and gas companies. Carbon dioxide captured from fossil fuel-burning plants is typically only profitable to sequester if it’s used to drill oil, a fact often used by activists to discredit its value as a climate solution.

Biden explicitly acknowledges dangerous continued reliance on fossil fuel use yet offered no specific interventions to radically redirect those outcomes in this plan.

“Notwithstanding the progress we have made in reducing emissions in the power sector, fossil fuels still comprise nearly 80 percent of global energy use,” the proposal states. “There is much more work to be done to identify affordable solutions.”

The early reviews of Biden’s climate plan showed a willingness to acknowledge the former vice president’s progress on the issue.

Sunrise Movement called it “a good start” but said, “we need even more ambition from candidates if we’re serious about saving millions of people from death before entire nations sink into the sea.” Greenpeace said the plan marked “a critical step forward” but “does not do nearly enough.” Friends of the Earth called it a “half measure to stop climate change.”