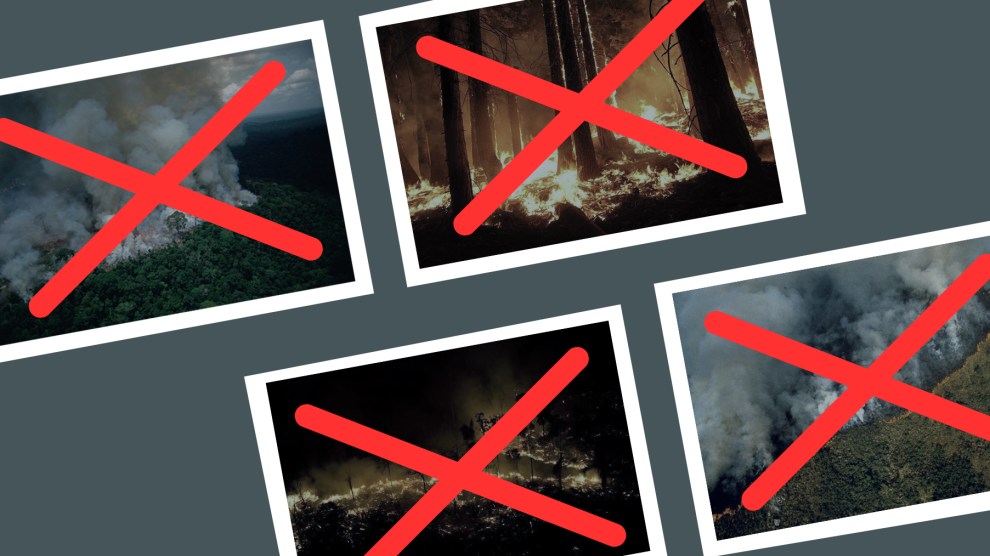 Update, 1:15 p.m. Friday, Aug. 23: Emmanuel Macron, the president of France, included one of the misleading viral photos in a tweet Thursday. It has been retweeted more than 40,000 times and was embedded in a New York Times article about the fire. We learned since originally publishing that the photo was taken by Loren McIntyre, who died in 2003.

Our house is burning. Literally. The Amazon rain forest – the lungs which produces 20% of our planet’s oxygen – is on fire. It is an international crisis. Members of the G7 Summit, let's discuss this emergency first order in two days! #ActForTheAmazon pic.twitter.com/dogOJj9big

The hashtag #AmazonRainforest was trending on Twitter Wednesday, with many users outraged that the mainstream media was not sufficiently reporting on the fires that have ravaged the world’s largest rainforest. There are very real fires burning in the Amazon and they do deserve more coverage, but there’s a big problem with this viral campaign: Most of the photos claiming to show the fires are fakes.

The Amazon has experienced more than 80 percent more fires in 2019 than in the same period last year, according to a National Institute for Space Research (INPE) report from August 2019. Many of them were started by farmers deliberately clearing land for cattle ranching, Reuters reports, and they have increased since Jair Bolsonaro, who is unsympathetic to rainforest preservation efforts, took office as president of Brazil in January.

On Monday, an ominous cloud of smoke from the fires settled over Sao Paulo, Brazil’s largest city. See the picture here:

But many of the viral images that purportedly show the blazes are actually from different fires.

This photo below, which has been retweeted more than 16,000 times, was posted on a climate website called ALERT in February 2019 and also appears at the 7:55 mark in this 2018 presentation about climate change. Climate website ClimateBrief credits the image to Alamy Stock Photo.

For three weeks, the Amazon RAINFOREST has been burning. Fire frequency in Brazil has increased +82% due to droughts, increased heat, and land use change (logging, industry, & agriculture). pic.twitter.com/NlDPlve7OE

None of the photos in the viral photoset below fairly represent the current Amazon fires. The first, top left, depicts a forest fire in California and was uploaded to the US Department of Agriculture’s Flickr account in 2013. The second does depict a fire in the Amazon, but dates back to 1989, according to the Guardian. The third photo on the bottom left is a copy of the image I mentioned above. Finally, the fourth is a digital map of South American fires from news website InfoAmazonia, and while it ostensibly represents the locations and frequency of forest fires in the Amazon, it is cropped to omit the key, which shows that the shaded areas represent the frequency of fires between 2000 and 2012, and the yellow areas represent fires from 2000 to 2014.

This post below containing the photos was retweeted more than 4,000 times.

#ICantSleepBecause The Amazon has been burning for 3 weeks, and I’m just now finding out because of the lack of media coverage. THIS IS ONE OF THE MOST IMPORTANT ECOSYSTEMS ON EARTH. SPREAD AWARENESS #PrayforAmazonia . Let's save it. Retweet to spread the information. pic.twitter.com/N5MhWz5DDp

The photo on the left in the tweet below appeared on Greenpeace’s website, with credit to photographer Daniel Beltrá, in August 2018, but it dates back to at least 2014, when it was used in articles about forest fires in Sweden. The right-hand photo appears to depict a fire in Siberia. Kendall Jenner retweeted it to her more than 28 million followers along with a message about how fires in the Amazon have been burning for three weeks.

Why can we hear about celebrity news in 5 minutes but the Amazon rainforest has been burning for nearly 3 weeks and we are only just hearing about it. This isn’t just trees. This is animals and their habitats. Tribes and their homes. And 20% of the oxygen we breathe. #AmazonFire pic.twitter.com/PEl2iFqL0m

Continuing our (unofficial) monitoring of #Siberia #wildfires
This one is at 70.9° North and 60 km from the shores of the Sytygan Tala Bay, in the Laptev Sea
A rough estimate puts the burn scar at around 60 km2#savesiberiaforests #потушитепожарывсибириin pic.twitter.com/oNT11jrkks

The top left photo in the tweet below is by photographer Mario Tama for Getty from 2014, and the bottom left photo was taken by Erika Berenguer in 2015.

Our earth is dying . It's time to save our earth . #PrayforAmazonia pic.twitter.com/Ot6Du94llY

The photo below, posted by a verified Twitter account, includes the hashtag #AmazonRainforest but actually depicts a fire at Brazil’s Taim Ecological Station in 2013, shot by Lauro Alves for Getty.

The photo below was retweeted more than 4,000 times with the hashtag #PrayforAmazonia. John McColgan took the photo of a fire in Montana’s Bitterroot National Forest in 2000.

It’s such a catastrophic situation, still no one cares, rain forest 🌳 burning, glaciers melting, species getting extinct and we are worried about profit margins, when we’ll realize that we can’t eat, drink or breath money 💵!!!!!#PrayforAmazonia #AmazonRainforest pic.twitter.com/J9qnL9e19r

It’s unclear why people are circulating these photos instead of current images of the Amazon ablaze, but one thing is certain: You can’t trust everything you see on the internet.

This post has been updated to accurately describe Sao Paulo.