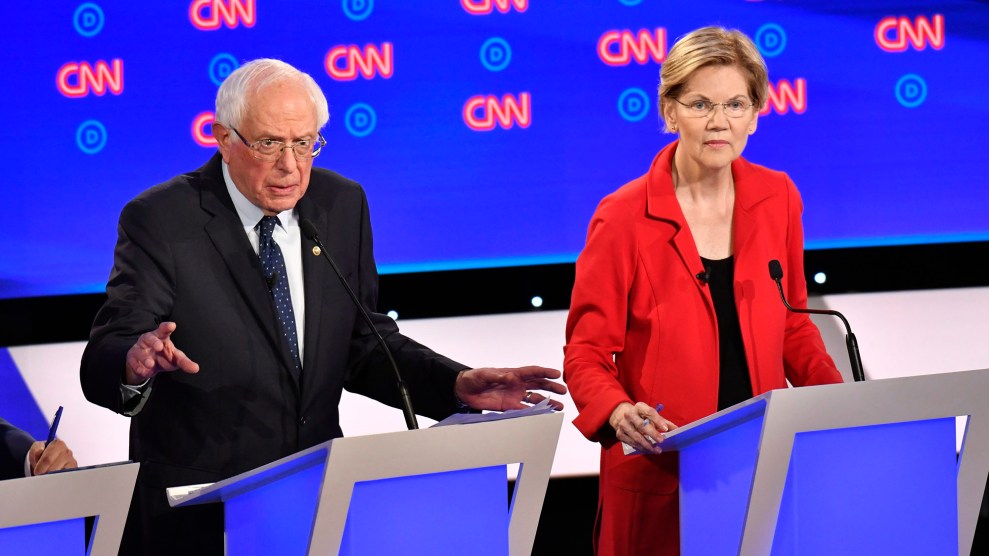 The CNN Climate Crisis Town Hall made it clear that Democrats are encountering a much stronger appetite than ever before from their base for substantive action to address climate change. Even though the baseline for what constitutes a strong climate action plan has changed, there are still rifts among the candidates on the role of nuclear power, the future of fracking, and carbon pricing. Naturally, CNN spent a lot of time interrogating them on these issues during the seven-hours of their forum on climate.

Yet, there was one crucial area that was treated as an afterthought: Transportation.

All the presidential candidates have one easy answer for what they would do, which is to reverse President Donald Trump’s unprecedented rollback of auto pollution standards. The Trump administration is trying to revoke California’s waiver to pursue stronger standards for fuel efficiency that cut the transportation sector’s footprint. On Friday, Trump officials sent a letter to California warning that a recent deal it struck with four major automakers “appears to be inconsistent with federal law.” The Justice Department has also launched an antitrust inquiry into the automakers’ arrangement, reports the New York Times.

Yet a 2021 reversal of this doesn’t mean the transportation problem is going away. Transportation has become the top source of US pollution, accounting for 29 percent of greenhouse gas pollution, even as the power sector has become cleaner. The margin is only expected to grow. With electric vehicles sales still at barely 1 percent of the US market, Americans’ desire for SUVs after a brief slump has become reinvigorated. Globally, industries like the shipping business and air travel are growing.

“I don’t feel that the party is really reckoning with the importance that land-use planning will have as a tool for fighting climate change,” Leah Stokes, UC Santa Barbara Political Science Professor, told me. “I think that the Democratic primary has not focused as much on density, land-use planning and its links to transportation.”

“I don’t feel that the party is really reckoning with the importance that land-use planning will have as a tool for fighting climate change.”

Decarbonizing these sectors gets a lot harder than sustaining and adding to the recent progress the US has made in retiring coal plants—admittedly a lot of that effort has been replaced by another climate problem, natural gas. Any change requires shifting the kinds of cars people want to buy and the way we travel. It eventually also requires figuring out how to get existing vehicles off the road in exchange for more fuel-efficient options.

Dealing with all this requires a different vision than slapping new infrastructure on top of the old systems. It’s easier, and more politically popular perhaps, to focus on the job-creation aspects of the plans. And that’s probably why so many of the plans emphasize the old-fashioned New-Deal-style jobs programs over tackling our highway addiction.

“If we are able to move in a direction that we have 500,000 charging stations for electric vehicles, what does that do?” Joe Biden said at the town hall. “Well, that gives us a corner on the electric vehicle market. That will create thousands of good jobs in the automobile industry.” Elizabeth Warren adopted her plan from Washington Governor Jay Inslee, who centered his entire campaign around climate. It goes further to embrace the goal of hitting 100 percent zero-emissions for new cars by 2030. It also proposes charging stations for cars at every federal highway rest stop, a clean fuel standard involving biofuels, and a cash-for-clunkers program.

Bernie Sanders’ plan does all this and more, but it also includes one more policy that isn’t about to help cut transportation emissions. Not to pick on Sanders—his plan is just the most detailed out there—but what he is suggesting goes to the heart of the American problem of how we think about infrastructure. Alongside funding for public transit and upgrading water infrastructure, he also include more funding for highways and roads, promising more resiliency to climate impacts but not much else. Highways tend to exacerbate pollution by increasing the reliance on personal vehicles at the expense of a robust public transportation program.

Here are some of the relevant parts of Sanders’ plan:

“Increase funding for roads. Our national roads and highway system is crumbling. That’s why Bernie’s Rebuild America Act provides $75 billion for the National Highway Trust Fund to improve roads, bridges, and other transportation infrastructure in the United States and another $2 billion for other surface transportation needs.

This is exactly the kind of infrastructure that incentivizes more SUV driving and more sprawl. Not only that, but the building of highways and roads involves cement, which unleashes even more carbon into the atmosphere. His proposal does also include funding for mass transit.

“Even in Bernie Sanders’ plan,” Stokes noted, “there is two times as much marked for road infrastructure, generally, as public transit. I understand some of that [almost] $700 billion is for water and infrastructure, but there’s a lot of money for low-density status-quo.”

A line in Sanders’ plan might unintentionally summarize the essential problem of this kind of dated thinking among many of the candidates: “We will invest in nationwide electric vehicle charging infrastructure, to increase access to these resources for all,” he wrote, “just as we built an interstate highway system in the 1950s and 1960s.”

Fixing the transportation problem won’t be as simple as an upgrade to the 1950s-era interstate highway system. It requires a different way of thinking about urban planning and public transportation that doesn’t incentivize Americans to stick with their SUVs.

The town hall had robust discussion, but it didn’t even crack the surface of these problems—which suggests that they may be here to stay.