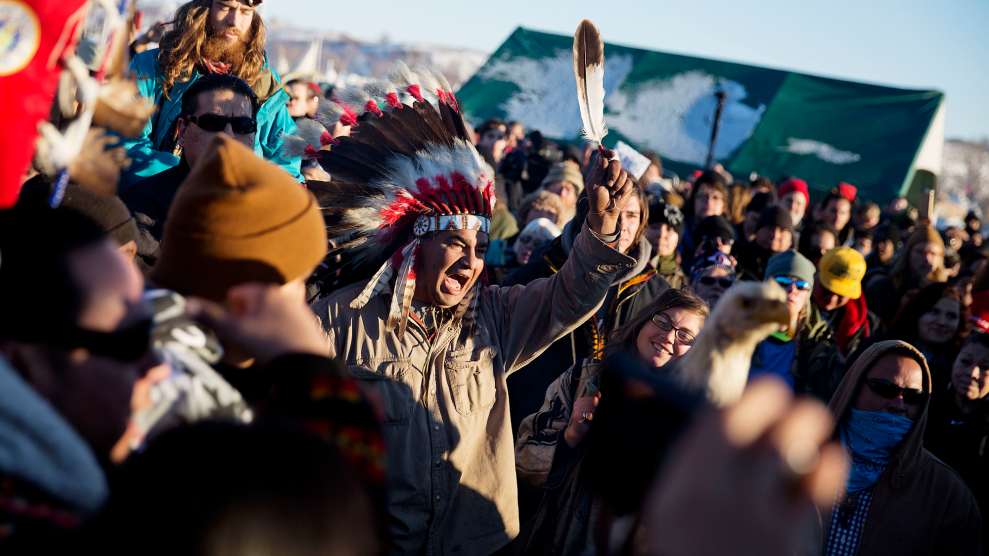 A crowd gathers at Standing Rock in December 2016, after an easement was denied for the Dakota Access Pipeline. President Trump later granted the easement.David Goldman/AP

In a major victory for Indigenous groups, local environmentalists, and free speech advocates, the Governor and Attorney General of South Dakota on Thursday submitted a settlement agreement that would stop enforcement of key provisions in the state’s “riot-boosting” law, which legislators passed earlier this year after lobbying from law enforcement groups and TransCanada, the company behind the Keystone XL pipeline.

In the settlement, the state of South Dakota has agreed to not enforce provisions of the law that dole out felonies and create costly fines for people who “encourage” riots without participating. Like other states, South Dakota law defines “riot” broadly enough to include some forms of peaceful protest.

South Dakota Gov. Kristi Noem described the “riot-boosting” law passed earlier this year as a “next-generation pipeline funding model” designed to “address issues caused by out-of-state rioters…that have attacked nearby projects,” alluding to protests in North Dakota that impeded construction of the Dakota Access Pipeline in 2016. The “riot-boosting” law would have allowed the state to sue people and organizations who encourage such protests, even if they never join one, or live in other states.

In a suit filed in March with the US District Court in South Dakota, the ACLU (representing local farmers, ranchers, and Indigenous groups) held that this law would “chill” free speech and peaceful protests by creating a heavy deterrent—penalties of up to three times the cost of damages incurred—for any statement that can be so much as linked to behavior the state construes as violent.

As I reported back in June,

No one has been fined yet, but the law is already proving effective as a deterrent. The 7th Defenders, a group of indigenous youth based on the Cheyenne River Reservation in South Dakota, recently lost their fiscal sponsor after it decided that it could not afford to be associated with a group that plans to protest the Keystone XL pipeline… the Sierra Club, another plaintiff in the suit, also says they would be “hesitant” to challenge Keystone XL through protected forms of speech like protests, rallies, and online campaigns due to the high risk of costly liability.

South Dakota’s agreement to not enforce these laws comes on the heels of a federal judge issuing a temporary injunction that blocked provisions of the “riot-boosting” law. In his decision, the judge wrote that the law was likely unconstitutional, and suggested that Martin Luther King and the Southern Christian Leadership Conference “could have been liable” had a “riot-boosting” law existed during their protests in Birmingham, Alabama.

While this spells victory for activists in South Dakota, a slew of other states have recently passed similar laws criminalizing various forms of protest, especially those which target oil and gas projects. As construction of Keystone XL gets underway in South Dakota and Montana, a number of states through which the pipeline would pass, such as North Dakota and Texas, have hiked their penalties for protesting near “critical infrastructure,” threatening felonies with up to five years in prison and fines of up to $10,000 (or $100,000 for organizations). Many of those laws mirror language put forth by the American Legislative Exchange Council (ALEC), which is affiliated with many oil companies, including TransCanada. Two women are currently facing up to 110 years in prison after admitting to acts of sabotage that targeted the Dakota Access Pipeline.

These laws are widely opposed by Indigenous groups, who have led many recent challenges to fossil fuel infrastructure. Under an anti-protest law passed last year in Louisiana, Anne White Hat, a Sicangu Lakota single mother, is currently being charged with two felonies and up to 10 years in prison for allegedly trespassing on a pipeline easement. White Hat is the lead plaintiff in a different federal suit challenging the constitutionality of the Louisiana law.

In a statement, Dallas Goldtooth of the Indigenous Environmental Network, one of the plaintiffs in the South Dakota case, said that he and his allies “will celebrate this win, but remain vigilant against further government attempts to outlaw our right to peacefully assemble. We will fight on for the protection of the Oceti Sakowin people and the sacredness of Mother Earth with no hesitations.”