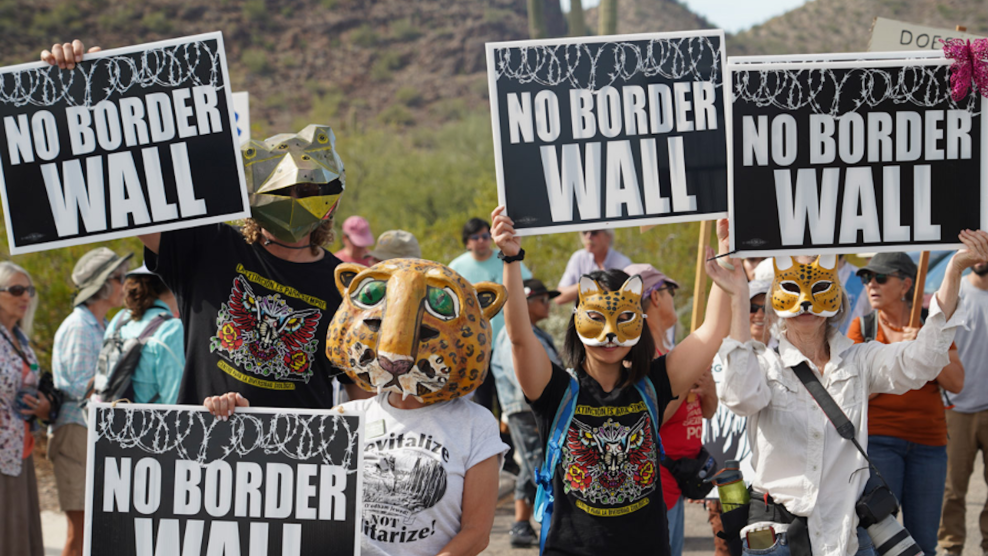 On a Saturday morning in early November, Edwina Vogan and a few of her friends drove over two hours from the Phoenix suburbs to southern Arizona to protest new wall construction at the US-Mexico border.

By the time I met them, among a throng of protesters in front of Organ Pipe Cactus National Monument’s visitor center, the weather was sweltering. The protesters chanted, “Hey hey, ho ho, this border wall has got to go.” Some had donned animal masks made from paper, representing endangered species like the jaguar, further at risk with its habitat cleaved in two.

Every 20 minutes or so, a volunteer shuttle brought more people.

“We live over a hundred miles from here, but that doesn’t mean that we don’t care about what is going on here,” Vogan told me. She wore a shirt that showed monarch butterflies, which have come to symbolize migration. A member of CODEPINK—a women-led organization that opposes militarization and supports human rights—she came to see what was happening here firsthand. “This is a human tragedy and an ecological tragedy,” she said. “We are here to witness.”

She wasn’t alone: Over 300 environmentalists, Indigenous activists, Samaritan groups and human rights defenders had gathered, for the first time, to protest the panels of steel bollards going up just a few miles down the road. Organizers hadn’t expected so many concerned people, alerted by social media, to make the journey from elsewhere in Arizona and the surrounding region. “I guess I shouldn’t be surprised that this many people traipsed all the way out here,” said Randy Serraglio, with the Center for Biological Diversity, one of the event’s organizers. “Border issues really get people fired up, they really do.”

At Organ Pipe, the landscape’s ecology confronts its militarization: A migratory corridor collides with a wall, a natural spring could lose water to pumping for concrete, and both migrants and locals who cross the Borderlands are monitored and tracked. Here amid a sea of saguaros, standing tall like giant green tridents, and organ pipe cactus rising in clusters like their namesake church organ pipes, the voice of local dissent grows louder.

Some members of the Tohono O’odham Nation, whose land spans both sides of the border, see the wall construction as the latest abuse from the federal government. “To the Anglo people, to the people of color, I want you to think back in terms of your own communities,” said David Garcia, a former tribal leader. “What may be going on in your communities has just started recently, but this has been going on for many centuries.”

Nellie Jo David, who is Hia-Ced O’odham and a Tohono O’odham citizen and activist, said that Tohono groups like Indivisible Tohono and the O’odham Anti-Border Collective have been standing up for border issues for years. “We’ve all grown out of the constant militarization and surveillance our land has experienced,” David told me.

I followed the protesters down a winding dirt road to see firsthand where new panels of wall are rising at a dizzying pace. Vehicle barriers have been ripped from the ground, replaced by steel bollards. The difference is dramatic. Where the old barriers blend into the landscape—simple rusted metal columns a few feet high with big gaps in between—their successors resemble the bars of a giant never-ending jail cell. This nuance is lost when national outlets like the Washington Post report that President Donald Trump’s wall is simply replacing old fencing. “I think a lot of the media would rather make it look like Trump isn’t delivering,” Laiken Jordahl, Borderlands campaigner for the Center for Biological Diversity, told me. “The sad truth is that right now, border walls are being built in all four states; they are destroying some of the most beautiful places in our Borderlands.”

The ongoing construction is already having ecological impacts and threatens to destroy or fragment habitat for 93 threatened, endangered and candidate species, according to a 2017 report by the Center for the Biological Diversity. Already environmentalists fear that border construction, which involves mixing concrete with hundreds of thousands of gallons of water from nearby aquifers, could drain Quitobaquito Springs—the only place in the United States where endemic species like the Quitobaquito spring snail, Sonoyta mud turtle, Quitobaquito pupfish and desert caper plant are found. This desert oasis is located within a few hundred feet of the U.S. Mexico border.

At the wall protest, not far from the spring, volunteers from No More Deaths, a humanitarian aid organization, held signs with water jugs bearing the words: “Humanitarian aid is never a crime.” The following Monday, volunteer Scott Warren would face a retrial on felony charges for supplying food, water and shelter to two migrants through his work with the group. This week he was acquitted of the charges. In this desert-scape, the bodies of over 3,000 migrants have been recovered since 2001, their deaths mostly due to exposure.

For the next hour, I watched as people touched the metal slats, examining them with their fingertips and peering out to the other side. In bundles of six, bollard-wall panels dotted the road, awaiting their placement down the line. Around us in plain sight, dead saguaros lay.