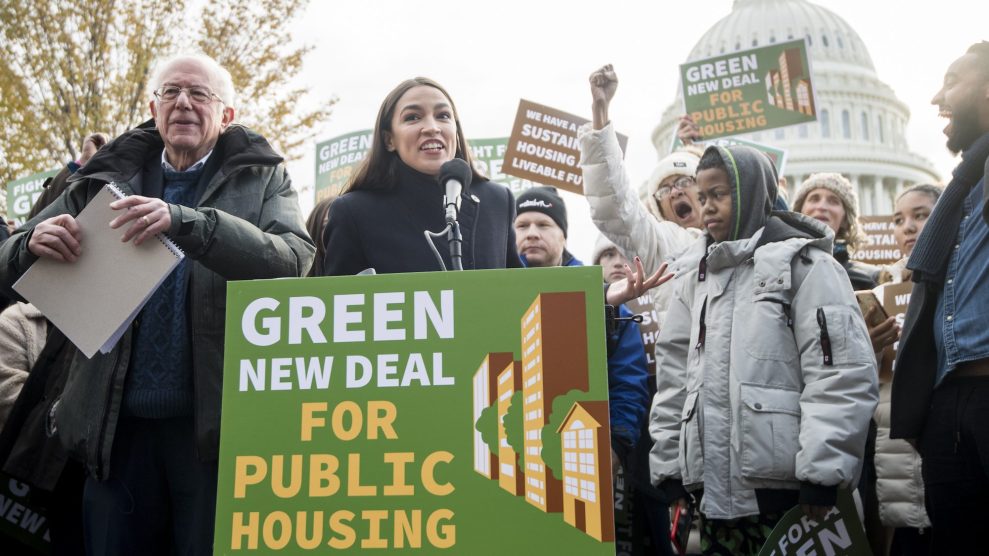 This piece originally appeared in CityLab and appears here as part of our Climate Desk Partnership.

Socialist Democrats are pushing the progressive envelope with a new iteration of Green New Deal legislation this week, this time with a focus on public housing.

At a press conference outside the Capitol on Thursday, Ocasio-Cortez said a bill focused on public housing reflects the larger aim of the Green New Deal to prioritize “frontline communities”—those that are most likely to be harmed by the climate crisis. “In the Bronx alone, 2,400 public housing residents may be going without heat tonight. That is inhumane,” she said. “That is environmental injustice.”

At the same event, Diane Yentel, president and CEO of the National Low Income Housing Coaltion, said: “We must build the political will to combat both the affordable housing and climate crises.”

“We must build the political will to combat both the affordable housing and climate crises.”

The bill is an effort to bag two birds with one stone. America’s public housing portfolio is in a shambles, with deferred maintenance costs nationwide running into the billions. The bill introduced by AOC and Sanders would bring that backlog up to date while also reducing the energy consumption from this aging housing stock.

Overall, buildings are responsible for about 39 percent of global carbon emissions, and about one-third of emissions in the U.S. That puts energy retrofits front and center in debates about how to arrest climate change.

“For an estimate between $119 and $172 billion, you could decarbonize the country’s entire public housing stock,” said Billy Fleming, the Wilks Family Director of the Ian L. McHarg Center for Urbanism and Ecology at the University of Pennsylvania. “If you think about that from just a pure carbon perspective, that’s the equivalent of taking 1.2 million cars off the road.”

The energy retrofits imagined by the bill run the gamut, including new cladding, efficient window glazing, and electric appliances. Building-systems modeling tools would be used to determine the best approach to upgrades in different regions. All the technology envisioned by the bill is already within reach, according to Fleming. Energy retrofits could reduce the costs of public-housing water bills by $97 million per year (about 30 percent), according to estimates by the progressive think tank Data for Progress, and bring down energy costs by $613 million (70 percent).

Fleming, an alum of President Barack Obama’s Domestic Policy Council, is also a senior fellow with Data for Progress, which has led the national conversation on policy associated with the rising socialist left and the Green New Deal. He said that Ocasio-Cortez’s office approached the think tank to discuss how deep energy retrofits could be a way of improving the lives of public housing residents while also accomplishing Green New Deal goals.

“It was a surprise to us how quickly and how cheaply this could be done,” said Fleming, who worked on the proposal with Julian Brave NoiseCat, director of Green New Deal strategy for Data for Progress, and Daniel Aldana Cohen, director of Penn’s Socio-Spatial Climate Collaborative and, like Fleming, a Data for Progress senior fellow. “We began by saying, what are the things we have to do just to get public housing up to the standard that we promised residents?”

Overall costs for the program speak primarily to the dire straits of public housing in America. Estimates from the US Department of Housing and Urban Development for necessary repairs for public housing nationwide through 2030 total $90 billion, work that includes abatement of lead, mold, and other toxins. Given the intrusive nature of this work, a more dramatic overhaul would not necessarily mean a much bigger lift.

“If we have to do all of this work anyway, what would it cost to take this a step further and do deep energy retrofits that get the nation’s entire public housing stock at or near a net-zero standard?”

“If we have to do all of this work anyway, what would it cost to take this a step further and do deep energy retrofits that get the nation’s entire public housing stock at or near a net-zero standard?” Fleming said.

The bill, which is cosponsored by Oregon Senator Jeff Merkley and Massachusetts Senator Elizabeth Warren, would create some 250,000 jobs—including high-paying jobs and union jobs, as the proposal’s backers are quick to point out. Some of these would benefit public housing residents themselves. A bill that would actually put severely delayed federal upgrades into motion would not only spur new opportunities, it would promote economies of scale to boost industries in weatherization and energy retrofits, its backers say.

“Policies such as this which protect the needs of workers, taxpayers and community should be implemented wherever public funds are spent,” said Mike Prohaska, business manager for New York’s Construction & General Building Laborers Local 79, in a statement.

“As [New York City] makes plans for a changing climate, public housing residents are often last on the list, despite being some of the most vulnerable,” said Wanda Salamán, executive director of Mothers on the Move/Madres en Movimiento, a South Bronx community organization, in a statement. “The Green New Deal for Public Housing includes opportunities for residents to finally gain access to promised jobs, while improving their quality of life and planning for climate resilience.”

Yet the benefits of a GND for public housing would not accrue to New York and other coastal cities alone. The analysis from Data for Progress finds that such a bill would create more on-site construction jobs in states that voted for President Donald Trump in 2016 than in blue states.

The original Green New Deal framework called for upgrading all buildings in the U.S. as a way to transform the nation’s economy. Republicans pounced on that proposal as impossibly optimistic, citing figures from conservative think tanks that pegged the costs for building upgrades at $1.6 to 4.2 trillion.

So the new approach from AOC’s office is more piecemeal. The Green New Deal for Public Housing Act fits within an existing policy sphere targeting the built environment to bring down the country’s carbon pollution. A new, Green New Deal–inspired law in New York aims to cut the city’s carbon emissions by 80 percent by 2050, in line with the Paris Agreement. (Trump withdrew the U.S. from the Paris protocols earlier this month.) Numerous U.S. cities now require the owners of large buildings to measure and disclose their energy use.

The AOC–Sanders bill also promotes public housing as a goal in itself. A provision of the bill would repeal the Faircloth Amendment, a federal rule that caps the construction of new public housing units. Data for Progress has outlined a vision for a progressive housing agenda that leans heavily on public housing and other goals that current federal law (and federal funding levels) make difficult or impossible. People’s Action, a grassroots group, introduced a policy platform called the Homes Guarantee that outlines many of the same goals.

Housing has emerged as a high-profile issue in the Democratic primary, with numerous candidates touting a range of plans and reforms. In the fall, Ocasio-Cortez produced her own suite of protections for tenants, immigrants, children, and others, most notably a proposal for a national rent control policy. The left has found a policy arena in which they have common ground with establishment Democrats—at least in terms of big-sky proposals.

“The folks at People’s Action and in the housing and tenants’ rights movement really built the momentum for Congresswoman Ocasio-Cortez and Senator Sanders to feel like they had the cover and the urgency necessary to put this bill up,” Fleming said.