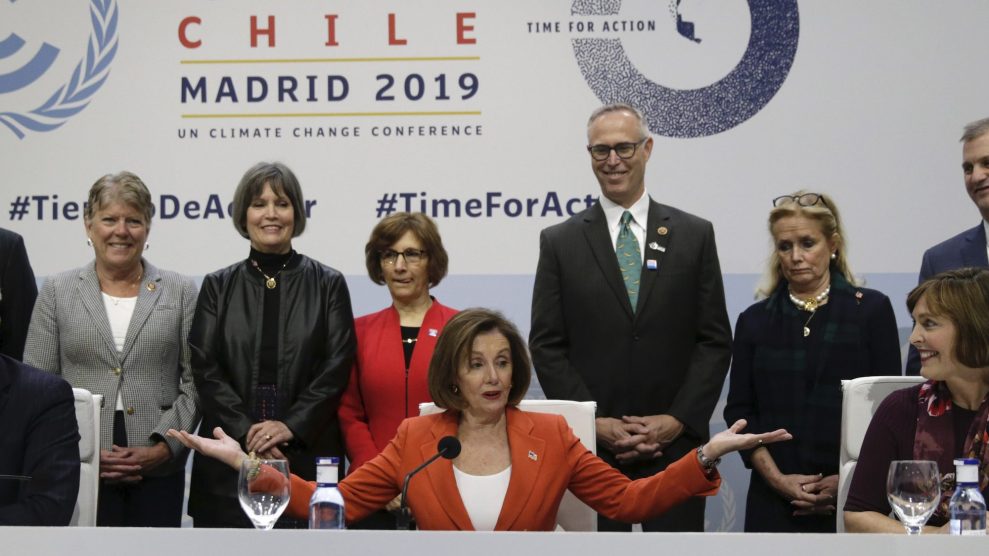 This story was originally published by HuffPost and appears here as part of the Climate Desk.

House Speaker Nancy Pelosi and other Democratic lawmakers assured world leaders at the United Nations climate conference in Madrid that the United States will continue to be a leader in combatting global climate change, despite backward steps by the Trump administration.

“The United States is still in,” Pelosi (D-Calif.) said at a news conference Monday on the opening day of the U.N. 25th Conference of the Parties. “Our delegation is here to send a message that Congress’s commitment to take action on the climate crisis is iron-clad.”

The COP25 summit opened one month after President Donald Trump kicked off the formal process of withdrawing the United States—one of the world’s largest polluters—from the historic 2015 Paris Agreement, which seeks to rein in greenhouse gas emissions and stave off catastrophic warming. Trump has repeatedly dismissed the threat of human-caused climate change and has pushed a fossil fuel-focused “energy dominance” agenda.

The U.N. conference runs through Dec. 13. Spain stepped up to host the event after Chile suddenly backed out in October amid civil unrest. No White House officials are slated to attend the summit, where countries will hash out technical details of the Paris accord and are expected to bolster individual commitments to reduce emissions.

Sen. Sheldon Whitehouse (D-R.I.) said the American delegation’s presence in Spain “signals the broad consensus of the United States of America in favor of climate action.”

The 15-member US delegation, which includes Democratic lawmakers from both chambers of Congress, did not bring up Trump or his efforts to undermine climate science during Monday’s 30-minute press conference. Instead, they focused on actions being taken by Congress, states, municipalities and private companies.

Asked about the ongoing impeachment inquiry into Trump, Pelosi said the delegation did not travel to Spain to talk about impeachment or the president.

“We’re here to talk positively about our agenda to save the planet for future generations,” Pelosi said, later calling climate change “a generational and existential threat to humanity.”

As the news conference came to a close, multiple members of the delegation shouted, “We’re still in!”