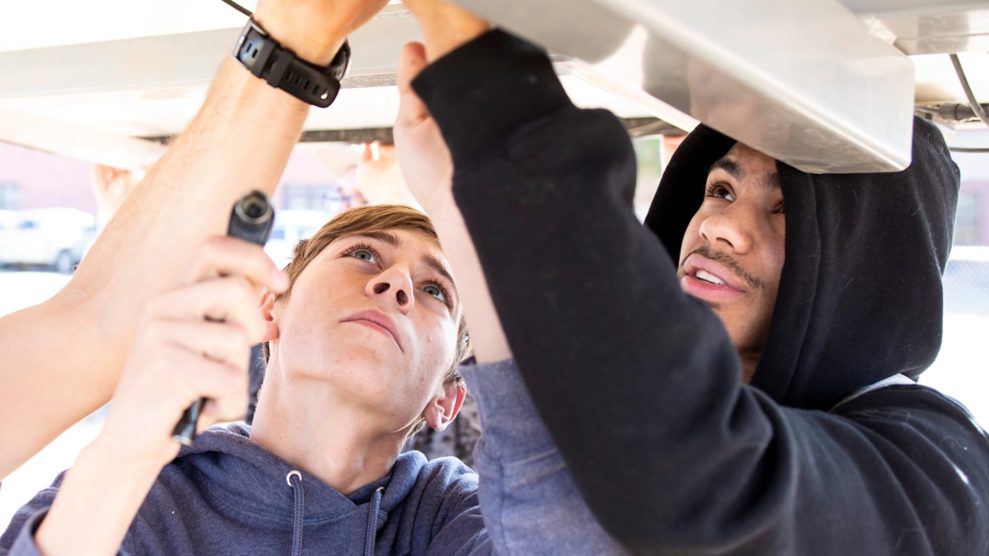 Ethan Bates and Cody Sauve adjust the wiring box on a solar array outside their Delta High School classroom. Bates’ father was a coal mine foreman.Luna Anna Archey/High Country News

At a picnic table in a dry grass field, a group of elementary school students watched as high school senior Xavier Baty, a broad-shouldered 18-year-old in a camouflage ball cap and scuffed work boots, attached a hand-sized solar panel cell to a small motor connected to a fan. He held the panel to face the setting Colorado sun, adjusting its angle to vary the fan speed.

“Want to hear a secret?” he asked the kids around him. “This is the only science class I ever got an A in.”

As he readily acknowledges, Baty hasn’t been the most enthusiastic science student at Delta High School. This class, however, is different. Along with a group of other seniors and a few juniors, Baty is enrolled in “Solar Energy Training.” The class not only provides a science credit needed for graduation; it also trains students for careers in solar energy or the electrical trades. It allows Baty to work with his hands, something he enjoys, while positioning him for employment in a fast-growing industry.

In Colorado’s North Fork Valley, solar energy—along with a strong organic farm economy and recreation dollars—is helping to fill the economic hole left by the dying coal industry, which sustained the area for more than 120 years. When the mines still ran, graduating seniors could step immediately into good-paying jobs. But in the past five years, two of Delta County’s three mines have closed. Approximately 900 local mining jobs have been lost in the past decade. Ethan Bates, for example, another senior in the solar energy training class, is the son of a mine foreman who lost his job when the Bowie Mine outside Paonia closed in 2016. Now, he’ll graduate as a certified solar panel installer.

National environmental and climate groups often discuss “just transitions” for fossil-fuel dependent communities like Delta, or Wyoming’s Powder River Basin. Mining companies are going bankrupt, while every year, solar and other renewables get cheaper. Such economic shifts are complex, but one thing is clear: If the transition to renewables is to truly account for the communities and economies it undercuts, it will include programs like Delta High School’s solar training. The class positions young people for success in a coal-free future, and does so from the ground up, attentive to the needs and cares of the local community.

Science teacher Ben Graves started the class four years ago. Described by a student as “cool” but with a “mad-scientist vibe,” Graves has a salt-and-pepper beard and dresses casually in trail-running shoes and hardwearing khaki pants. In class, he is affable but authoritative.

As a teacher, Graves sees his main duty as educating young people and creating good citizens. But to do right by his students, he needs to set them up for success under the current economic realities. And that requires classes like solar training. “I think we have to be doing some sort of trades education,” he said. “For a kid with a high school diploma, working service is really all you can do without more training.”

Many students in the solar class, like Baty, weren’t particularly successful in traditional science classes. They’re kids who haven’t “played the school game,” as Graves put it, of college admission and standardized tests. For these students, training in electrical trades has now joined ranks with welding and agriculture programs offered by the high school.

In the past four years, the class has helped install two solar arrays behind Delta High School. Students have done much of the work designing the structures and digging the trenches to lay conduit cables. This year for their final project, they will take apart and fully re-install one of the solar arrays. According to Graves, teachers at other local schools are keen to integrate solar training into their classes. Solar Energy International, a local nonprofit and a major catalyst behind the Delta class, is working to integrate solar training into science curriculum across the region.

These projects are a boon to public school budgets, which lost a tax base when the mines closed. On a school day, the projects can supply about 10 percent of Delta High School’s energy demand—up to 30 percent on weekends. Thanks to a municipal cap, Graves said, the school has reached the limit on how much solar it can install, but even the current amount makes a difference.

“The facilities folks at first waved it away as a class project,” Graves said with a laugh. “Now, maintenance sees it as a real way to reduce demand charges. It went from us pushing some of this stuff on the administration to them saying, ‘Wait a second, we actually want this.'”

The economics of renewables are changing Delta at the county level, too. The area’s electric cooperative, Delta-Montrose Electric Association (DMEA) is ending its contract with its wholesale power supplier, Tri-State Generation and Transmission Association. Tri-State long required that buyers like DMEA purchase 95 percent of their electricity from the utility, limiting the amount of solar and other renewables local co-ops could produce. The company is notorious for its continued reliance on coal-fired power plants.

For many Delta residents, solar offers a certain self-sufficiency and local independence they find appealing, as evidenced by DMEA’s defection from corporate control. It’s also cheaper: DMEA can cut customer costs by increasing its share of renewable power. As a rural electric co-op, DMEA’s members call the shots, and in October 2018, they voted to raise money and sell stocks in order to buy out their Tri-State contract. Politically, Delta County might not be an obvious leader in renewable energy; it voted for President Trump by about 70 percent. But solar panels on homes and businesses are increasingly common, with demand sometimes outstripping the capacity of local solar firms.

In the school district where Graves works, DMEA has encouraged the adoption of solar by funding solar arrays at every high school in its service area. Through SEI, the co-op has administered grants for Graves’ class, and it funds solar trainings for teachers across the area.

From an educational view, the solar class’ value rests in its capacity to combine technical training and scientific learning outside the traditional grade structure. This dynamic was on full display on a bright fall day in October. The class was participating in an energy reduction contest against other Delta County high schools. Sponsored by the Colorado Energy Office, the Renew Our Schools program promotes student-run energy efficiency projects. At the end of the five-week competition, the winning school would receive $12,000.

The contest transformed the kids from students to energy auditors. Graves sent them out to prowl the hallways, counting light bulbs and measuring the energy used by the tech lab’s computers. In the hallways, every other light fixture is dark, the bulbs removed by solar students. At a separate table, another group used the data to calculate savings if the building’s sodium vapor bulbs were replaced by LED lights. Lights, the kids found, account for about half of the school’s peak power demand.

All this activity halted when tragedy struck in early November. Gannon Hines, a senior who hoped to use his solar skills upon graduating, died in a car accident. Three other students were in the car, and one remains badly hurt. Graves did not try to teach in the dark days of mourning that followed; instead, he simply let the students talk and remember their friend. He contemplated calling off the competition, but Hines had been one of the class’ more enthusiastic members.

“We talked about whether to stop or to keep going with the competition, and we decided to keep going for Gannon,” said Allora McClellan, another senior.

On the final day of the competition, just before Thanksgiving, it was clear Delta was going to lose, and some of the students were frustrated. They had redoubled their efforts after the heartbreak but came up short. It’s easier for smaller schools to show large energy-use cuts, and Delta is the largest school in the district. Students grumbled about an unfair contest. (In December, the school was awarded $2,000 by the state for their efforts. The funds will help replace fluorescent bulbs with LEDs.)

As the hour wound down toward lunch, Graves watched a group of students finish some final kilowatt calculations. A few were already drifting toward the door.