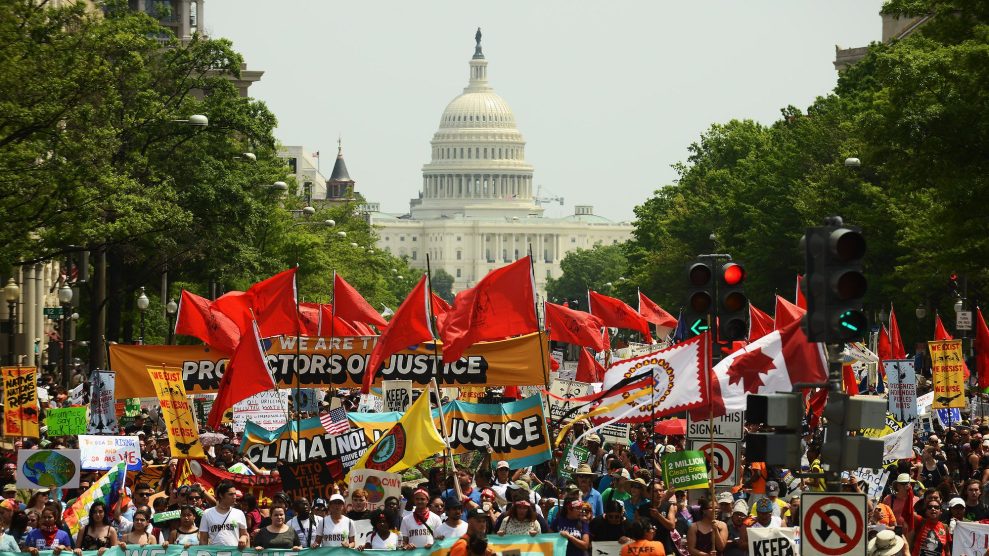 Thousands of people participate in the People’s Climate Movement march in Washington, D.C., April 29, 2017, to protest President Donald Trump’s attack on the climate and the Environmental Protection Agency.Astrid Riecken/Getty

A growing share of voters list climate and the environment as their top priority, according to a new poll from the Environmental Voter Project.

Of the registered voters surveyed, 14 percent named “addressing climate change and protecting the environment” their number one priority over all other issues, compared with 2 percent to 6 percent before the 2016 presidential election.

Climate and environment voters are also the most motivated to vote in 2020, saying they are willing to wait in line an average of an hour and 13 minutes at the polls.

“There are almost 30 million climate voters out there who are already registered to vote. That’s a huge constituency,” said Nathaniel Stinnett, the founder of the project, which aims to identify inactive environmentalists and turn them into consistent activists and voters.

“That’s like four times the number of NRA members. It’s enormous, and a lot of that growth has happened over the last two to three years.”

In 2016, there were 200 million registered voters in the US. If 14 percent of voters care the most about climate and the environment, that would equal 28 million people.

The poll compared survey responses to public voter file records and found that infrequent voters are more likely than frequent ones to assign a higher importance to climate and the environment.

That suggests environment advocates could benefit from getting more climate-minded voters to the polls with some easy fixes, such as awareness campaigns for early and absentee voting. A quarter of infrequent voters were not aware they could vote early, and 29 percent weren’t aware they could vote absentee. Voting by mail could also increase environment voter turnout.

The online poll of 1,514 registered voters also found that people dramatically over-report how often they vote—89 percent of registered voters claimed to vote in every or almost every presidential election, but just 59 percent actually did. That over-reporting shows that people want to be seen as good voters and that social pressure could encourage them to turn out, Stinnett said.

The poll also confirmed that while Donald Trump is unpopular with a majority of Americans, his supporters are the most reliable voters.

The new numbers back up Democrats’ efforts to weave the climate crisis into their platforms, as was on display in the most recent debate.

Nearly a third of self-identified “very progressive” voters called climate and the environment their top issue.