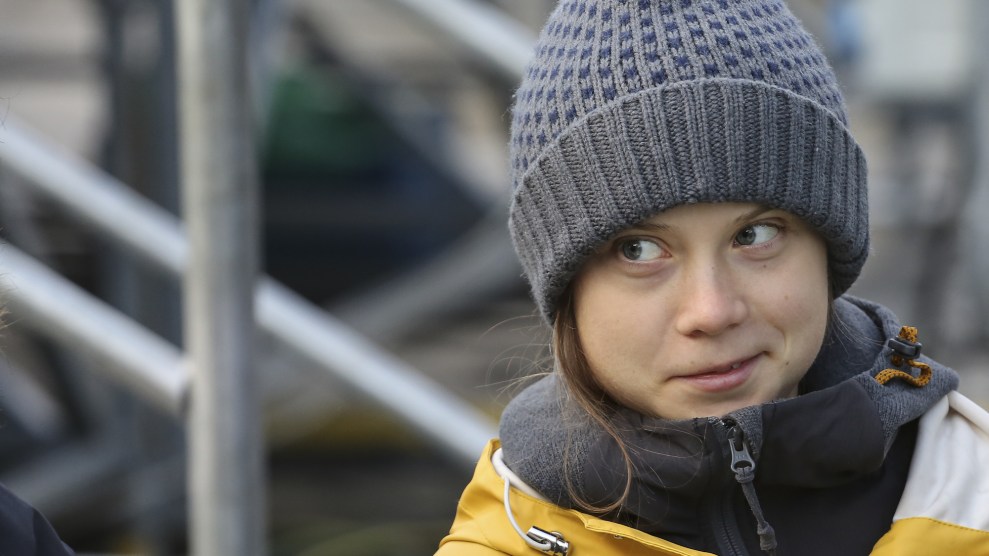 On the first day of this year’s World Economic Forum meeting in Davos, Switzerland, executives from its 1000 member companies as well as politicians and other world leaders gathered to drum up solutions to the world’s most pressing problems, and pat themselves on the back for their progress in certain areas—like climate change. Into this mix, teenage climate activist Greta Thunberg appeared and castigated them for having any self-congratulatory feelings over the way climate change is being addressed—an increasingly popular talking point for attendees of the conference. Her message: You’re not even close to doing enough, much less assuming that adopting a measured approach is anything to be proud of.

During a panel discussion there, hosted by the New York Times, Thunberg condemned world leaders who may have sounded the alarm on climate, but then followed up with inaction—a display of bad faith, she said. Measuring the distance between abstract claims of concern and a lack of any real structural change, Thunberg said:

“You say children shouldn’t worry. You say: ‘Just leave this to us. We will fix this, we promise we won’t let you down. Don’t be so pessimistic.’ And then, nothing. Silence. Or something worse than silence. Empty words and promises which give the impression that sufficient action is being taken.”

.@GretaThunberg, to world leaders: “You say children shouldn’t worry. You say: ‘Just leave this to us. We will fix this, we promise we won’t let you down. Don’t be so pessimistic.’ And then, nothing. Silence. Or something worse than silence." pic.twitter.com/kRD0DIco3v

Thunberg’s speech focused on how industrial and political leaders were trying to fold climate awareness into their current business and political systems, rather than acknowledge that only fundamental structural change—a complete world redesign—could effectively address the climate threat. Anything less would be falling short of the ambitious objectives leaders had set for themselves. “We don’t need to ‘lower emissions,'” she said. “Our emissions have to stop.” Countries stalling on meeting the Paris Accord climate goals are a perfect example of lofty rhetoric and negligible follow through. “The fact that we’re all about to fail the commitments you signed up for in the Paris Agreement doesn’t seem to bother the people in power even the least,” she said.

Even when action has been taken, Thunberg said, it’s uneven or has shown that climate change still isn’t being prioritized as it should. “We are not telling you to ‘offset your emissions,'” she said. “By just paying someone else to plant trees in places like Africa while at the same time forests like the Amazon are being slaughtered at an infinitely higher rate.” While those small-scale efforts are a necessary feature for a sustainable future, they’re “nowhere near enough” to substitute for systemic change.

Thunberg set out a list of four demands for the world’s decision-makers—a true litmus test for whether those in charge take the future of sustainability as seriously as they claim to:

“Immediately halt all investments in fossil fuel exploration and extraction.

And immediately and completely divest from fossil fuels.

Whether those demands are met with the expediency Thunberg is calling for seems pretty unlikely. But as the World Economic Forum begins, this 17-year-old activist from Sweden just may have made it impossible for those who attended to pretend they are taking the threat of climate change with the urgency it demands.

Watch a video of Thunberg’s entire speech below: