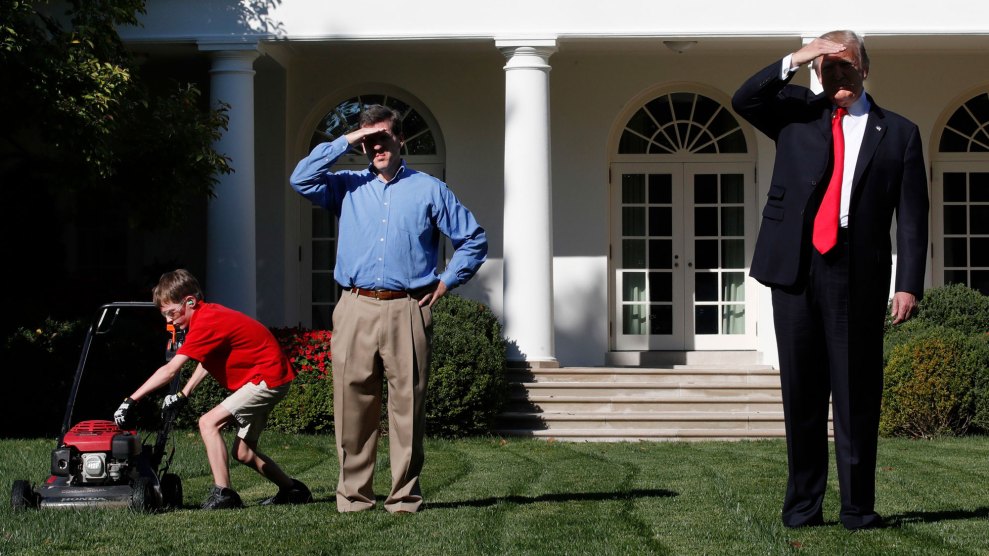 President Trump is reading a book, and he would very much like you to know about it. It’s a book about himself, called Donald J. Trump: An Environmental Hero, self-published in 2016 by his former environmental consultant, Edward Russo. Beginning in 2002, Russo consulted on the Trump Organization’s golf courses on matters like landscaping and meeting local zoning requirements.

“There is more of a frenzy to demonize Donald Trump than to expose the environmental achievements that he has created,” Russo told me.

It’s not entirely clear how long Russo worked for Trump—his book says it was 15 years, some media outlets say it was 17. But during that time, Russo claims he spoke with Trump two or three times a week about more than a dozen projects. Back in early 2017, I thought maybe I could get another window into Trump’s environmental record by interviewing Russo. He spoke to me from Key West, Florida, where he now lives, and we had a wide-ranging conversation on the consulting practice he was hoping to get going, after a career serving local New Jersey environmental and planning boards.

It was a weird experience: He told me how Trump’s early executive orders were really all about clean air and water and that his use of “hoax” to describe climate change was really a more nuanced criticism that climate change is just a distraction from the more important priorities, like cleaning up toxic sites. Later, when E&E News profiled him, he claimed to have turned down a position as Trump’s White House environmental adviser.

At the time, I hesitated to write about my conversation with Russo because frankly, I didn’t see why I should take seriously his claims about Trump’s environmentalism. His book didn’t provide a real window into the policy and industry interests Trump had backed. So his slim 88-pager sat on my desk for more than three years, collecting dust until I returned to it after a few recent events.

First, there was a White House presser in early January announcing Trump’s monumental rollback of environmental standards for new fossil fuel infrastructure. During a briefing, Trump noted, “Somebody wrote a book that I’m an environmentalist and actually called [it] The Environmentalist—actually, before I did this. But they wrote a book. I’d like to get it.”

But what really jogged my memory about Russo was the president’s sudden interest in trees. As The New York Times‘ Lisa Friedman reported Wednesday, “The president’s commitment to a global effort to plant one trillion trees by 2030 surprised even White House officials who work on environment policy.”

When I interviewed Russo in 2017, he told me, “There is more of a frenzy to demonize Donald Trump than to expose the environmental achievements that he has created.” When I pressed him to list those achievements, Russo praised Trump’s interest in landscaping on his golf courses, dealing with issues like erosion control and creating “specific and sometimes spectacular habitats.” He wrote in his book, “If I wanted to put in a pond to the left side to the left side of the fairway of hole six at Trump Philadelphia, he would remind me that there was a red maple close by and tell me to make sure we didn’t damage the root zone.” (Sometimes, Trump’s golf course environmentalism involves clearing land of wildlife and trees, which a Trump Organization golf course was caught doing just last year.)

In the book, Russo lionizes Trump as a green hero, even as he dismisses environmental advocates’ work as ineffective bureaucracy. While the environmentalists “promote meetings and seminars to develop visioning for some amorphous nebulous future response, Donald has been concentrating on clean air and clean water by stabilizing river banks, planting millions of dollars of trees, and establishing and enhancing important habitats.” (Yeah, sure, conferences are definitely all environmentalists do.)  Russo wonders, “I wonder how much effort Donald’s media critics are making to clean up the environment?”

He goes on to urge readers to “be more like Donald” in their own environmental efforts:

If people really want to do something constructive, start by cleaning up the landfills in your town, create important wildlife habitats, and promote water quality initiatives. You know, be more like Donald, because that is precisely what he does. Because if we concentrate on cleaning the air and water, the result will be reduced CO2 emissions. That is the point that Donald has been making. While others promote meetings and seminars to develop visioning for some amorphous nebulous future response, Donald has been concentrating on clean air and clean water by stabilizing river banks, planing millions of dollars of trees, and establishing and enhancing important habitats.

Trump has been repeating Russo’s claim that he cares about clean air and water—but the public has definitely not been buying it: Surveys of voters have consistently shown that climate change and the environment are his most unpopular positions, even among some Republicans. Small wonder, since wildlife, water quality, public lands, air pollution, enforcement, and oceans have all been targeted in the work of this “environmental hero:” 96 regulatory rollbacks and proposed budget cuts. And counting.