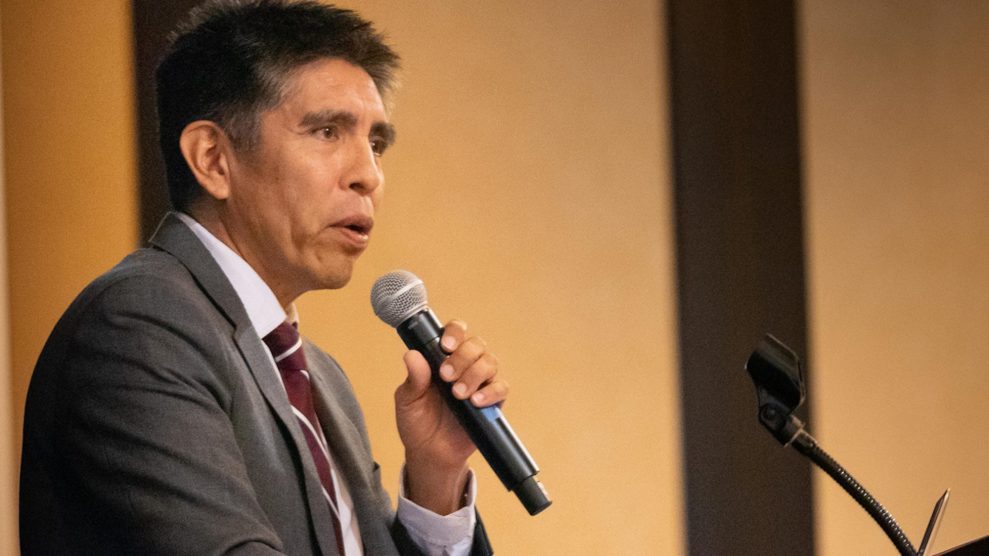 The Colorado River Basin is the setting for some of the most drawn-out and complex water issues in the Western US. In 2019, the Colorado River Drought Contingency Plan—a water-conservation agreement between states, tribal nations and the federal government for the basin, now in its 20th year of drought—passed Congress. This year, it goes into effect.

2020 will also see the start of the renegotiation of the Colorado River Interim Guidelines. The guidelines, which regulate the flow of water to users, were created in 2007 without tribal consultation and are set to expire in 2026. The 29 tribal nations in the upper and lower basins hold some of the river’s most senior water rights and control around 20 percent of its annual flow. But the tribes have often been excluded from water policymaking; around a dozen have yet to quantify their water rights, while others have yet to make full use of them. Most of the tribal nations anticipate fully developing their established water rights by 2040—whether for agriculture, development, leasing or other uses. Drought and climate change are still causing shortages and uncertainty, however. Already, the Colorado River has dropped by about 20 percent; by the end of this century, it could drop by more than half.

High Country News spoke with Daryl Vigil (Jicarilla Apache, Jemez Pueblo and Zia Pueblo), water administrator for the Jicarilla Apache Nation. Vigil, the interim executive director of the Ten Tribes Partnership, helped co-facilitate the Water and Tribes Initiative, coalitions focused on getting increased tribal participation on Colorado River discussions. Those efforts are critical, Vigil says, “because left to the states and the federal government, they’ve already proven that they will leave us out every time.”

HCN and Vigil spoke about “the law of the river”—the colloquial term for the roughly 100 years of court cases, treaties, agreements and water settlements that govern the Colorado—as well as tribal consultation and climate change.

This interview has been edited and condensed for length and clarity.

Sometimes it can be hard to really understand the core value of water, because it gets so caught up in things like policies and laws and bureaucratic language. Could you boil it down a bit and explain, at the core, what’s so important about this?

Through the Water and Tribes Initiative (in 2018), we did over a hundred interviews of all the major stakeholders in the basin: states, water providers, tribes, NGOs, conservation groups. And it was pretty amazing, to find out that when you talk to all these folks, almost universally they’re all committed; they have a personal relationship to the river as a living entity that needs to be sustained. And so there’s two different mindsets looking at ’07 guidelines and some of the policy that’s been created around the river. One really looks at the Colorado River as a plumbing system, getting water to people who need it, versus the other end of the spectrum—when you start to look at tribes and others who have similar values, who look at it as a living entity, who look at it as an entity that provides life. And so we started to try to articulate traditional, cultural values and integrate that into current policy so that people can understand. Because we know most people want to see a healthy, sustainable Colorado River, but they also have their constituencies that they protect. And so, how is it that we bridge that divide? Because people really do care about the basin, and they really do want healthy environments and healthy ecosystems. And so that’s proven part of the conversation that we were having—that the next set of guidelines absolutely needs to be able to capture not only the water-delivery issues that already are at the forefront, but really start to address the cultural, environmental, traditional values of the Colorado River and integrate that into the next set of planning. Because if we don’t, this system cannot be sustained.

How does climate change figure into the discussion?

We’re already seeing the impacts. And I think that’s something that absolutely has to be considered in the planning of the future, because right now—with 41 million people in the basin—as of 2010, the imbalance between supply and demand is already a million acre-feet. It’s projected, according to the basin study, to be 3 million acre-feet by 2060. We continue to act surprised when something new comes about in terms of a fire or a flood or an incredible drought. We’re making an impact on this planet, and it’s not a good one. That’s where, with the Ten Tribes Partnership, (we’re) really trying to make sure that we integrate those traditional, cultural values and spiritual values that the tribes have for the river as we move forward. Because if we’re not going to address it, it looks pretty catastrophic to us. And so I think, when we start talking about climate change, absolutely pushing to make sure that we’re thinking about a mindset of how we fit into nature, rather than nature fitting into us.

These kinds of discussions, compromises and negotiations can often, especially around water in the West, go on for decades. I’m curious what gives you momentum to keep working at it and putting so much energy into it.

A few different things. You know, those hundred-plus interviews that we did, we got to know people on a real personal basis. We got to know who they are and their commitment—many of these people have had decades working in the Colorado River Basin and doing the best that they could, given the structure. And everybody understands and agrees that the current system is not sustainable, and it doesn’t work; it’s not inclusive of the voices that need to be included into this process. And so that gives me great hope. And then you see things like the pulse flow, where they got water all the way to the Sea of Cortez. And to look at the faces of those Mexican kids who had never seen water in the Colorado River in their whole life come out, and just the wonder and the magic in their eyes of seeing what water does.

“To look at the faces of those Mexican kids who had never seen water in the Colorado River in their whole life come out, and just the wonder and the magic in their eyes.”

And then we just recently had our second basin-wide workshop and gathering up in Phoenix. We had a hundred-plus of the major stakeholders: states, feds, water providers, tribes and four tribal chairman present at this particular meeting, which is just huge, a bunch of people all in this room all talking about their joint commitment to the river. It’s moving to me because, I mean, I think that’s what it’s going to take.

Every tribal nation is different, but how might a tribal nation view water similarly or differently than a city or a state or the federal government in terms of water and management?

That’s the thing that we’re really trying to create awareness of. Because in the Colorado River Basin alone, you have 29 distinct sovereign entities—geographically, culturally, languages, and mindsets and traditions and culture in terms of how they think about the river. A lot of it’s really about the same, but in terms of the reverence and the spiritual connection that most tribes have, they look at it in different ways. For instance, invasive species of fish: You get tribes who are really aggressive about wanting to remove them because they’re not part of the natural environment that was always there. Then you get other tribes who are just like, eh, who cares and it’s not on their radar. And that’s why it’s important that a conversation about the next set of guidelines for the Colorado River has to include all 29 tribes—in terms of at least the opportunity to participate and at least having the information to determine whether they want to or not.

What are some big things that you would like people to better understand about the discussions around water in the Colorado River Basin?

I would like them to understand, from a tribal perspective, the incredible role that tribal water already plays in the basin. The other thing I would like people to understand is that this current law of the river is not sustainable. At some point in time there’s collapse. And I think if we don’t address it quickly, that collapse could happen sooner than later. And I really would like to have them understand that the way that the law of the river is structured—upper, lower basins, and how they’re managed differently, and how there’s different requirements and how states are engaged—it’s really complex and doesn’t make any sense, and, ultimately, I don’t think it’s going to get us where the broader consensus wants us to go in terms of a healthy, sustainable river, and still provide water to all living creatures and plants in the basin.

Specifically, what is it that tribal nations are bringing to the conversation that was lacking in the 2007 agreements?

I think absolutely a point of view about the sacredness of the river that most people really do share, whether they’re tribal or not. And then the other thing is the unique role that tribes are going to continue to play in the West—the large land areas and our resource development and how we move forward. It creates this mindset, in my mind, of building a pathway of who we want to be in the future. But a huge thing, too, is tribes bring certainty to the table. You know, it’s like, wow, what if we negotiated together about being able to move water where it needs to move, and work from a standpoint of collaboration and need rather than protect, defend and win, lose.

That’s a good point. Because that’s how water is so often talked about, as somebody versus somebody.

And I think that’s what the law of the river does. It’s contentious, and it automatically puts you in a position to protect and defend. And if that’s the foundation we’re operating from, what does that get us? It’s just going to get us this recurring, vicious cycle that we’ve been stuck in. The work that we’re doing at the partnership and Water and Tribes Initiative hopefully has broader implications in terms of tribal sovereignty, and looking at tribal sovereignty from the standpoint of an opportunity to create your future.