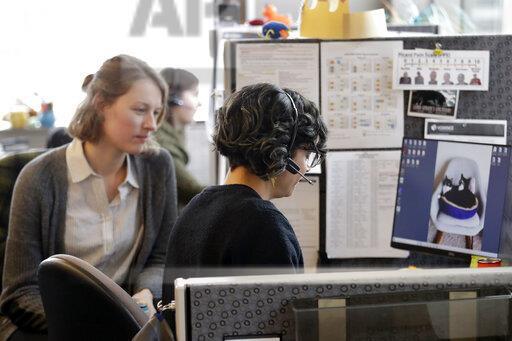 Public health nurse Jennifer Morgan, right, checks-in via phone with a patient self-quarantined at home who had some risk of exposure to the coronavirus as University of Washington epidemiology student Erika Feutz observes at the public health agency for Seattle and King County. (AP Photo/Elaine Thompson, File)

When the coronavirus caused San Francisco to close its public libraries in March, Ramses Escobedo, a 41-year-old manager at the Excelsior neighborhood branch, was put on paid furlough. He took advantage of the free time to install shelves in his home and catalogue his wedding photographs. But he missed seeing people from his community, and he wished he had a way to lend a hand during the crisis. So when an email from the library’s human resources department popped up on his computer asking if he wanted to be a contact tracer, he jumped at the opportunity.

Contact tracing is a technique public health researchers use to gain a deeper understanding of the way a virus infects people so they can help slow its spread. There are now more than 66,000 contact tracers in 44 states, according to a survey by NPR. Their goal: to identify all of the people an infected person came into contact with during the 48 hours before they started showing symptoms of COVID-19, and help them quarantine for two weeks.

If one person spreads the virus to three others, that first positive case can turn into more than 59,000 infections.

Each infected person can, on average, infect 2 to 3 others, according to researchers at the Center for Health Security, a nonprofit based out of John Hopkins University. And if one person spreads the virus to three others, that first positive case can turn into more than 59,000 cases during 10 rounds of infections. But if people can be warned before they develop symptoms, they will be less likely to spread the disease to someone else.

Epidemiologists first used contact tracing to contain smallpox in England 200 years ago. Cities have long used it to slow down the spread of other diseases such as syphilis, tuberculosis, and HIV. West African countries used it to contain the Ebola outbreak in 2014, and Asian countries, including China, used the method to contain the SARS outbreak in 2003. Recent contact tracing efforts have already taught us a lot about how the coronavirus behaves: A study that traced the paths of tourists who became infected with COVID-19 after staying in a chalet the French Alps helped prove that asymptomatic people can still act as carriers of the disease. We know more about how the virus spreads through air droplets in confined spaces through contact tracing of patrons at a hotel restaurant in China.

But COVID-19 has made contact tracing more challenging because of the speed with which the virus spreads, and the long incubation period of four to 14 days, during which patients often feel no symptoms. Add to it that almost 25 percent of patients never experience any symptoms at all. So a massive army of case investigators, contact tracers, clinicians, and public health officials are working to identify those infected and track down the rest of the people who may have been exposed to the virus, whether they feel it or not.

San Francisco launched its contact tracing effort on April 15, in partnership with the Department of Health, the University of California, San Francisco, and the software company DIMAGI. The team includes 276 furloughed city employees, including 34 librarians, and staff from the city’s attorney’s office, assessor’s office, and the labor department.

45 percent of confirmed COVID-19 cases in San Francisco were from the Latinx community.

Escobedo thinks that his experience as a librarian —which involves interacting with a wide range of residents and providing them with resources and reliable information—serves him well in the new job. Escobedo, who grew up in Mexico and is a native Spanish-speaker, is also one of San Francisco’s few bilingual contact tracers, enabling him to connect with the city’s Latinx population, which has been hit hard by the pandemic. As of May 5, 45 percent of confirmed COVID-19 cases in San Francisco were from the Latinx community, even though Latinx people only make up 15 percent of the city’s population.

The detective work starts at the point when someone is identified by a doctor as having a confirmed case of COVID-19. An investigator, usually a full-time employee of the Department of Public Health with credentials in disease investigation, then interviews the infected person on the phone, and asks the patient to name everyone she has been within six feet of, for at least 10 minutes, in the past 48 hours. This list is then passed onto the contact tracing team.

“If we’re serious about asking somebody to be in quarantine, then we need to provide them with the wraparound services.”

Once Escobedo is assigned a list of contacts (up to 25 or 30 for one infected person), he calls them one by one, and lets them know that they have been exposed to the virus. To protect medical privacy, he won’t divulge the name of the person who may have infected them—though he says most people already know, because most of the time it’s someone in their family.

But Escobedo’s job doesn’t end with asking the person to quarantine.

“We don’t just call people up,” says Dr. Michael Reid, an assistant professor of medicine at UCSF who has worked with HIV patients since 2014, and is leading San Francisco’s contact tracing efforts. “We recognize that if we’re serious about asking somebody to be in quarantine, then we need to provide them with the wraparound services so that they can quarantine,” Reid says. “So that means, you provide food for them, if they’re housing insecure, you provide housing for them, if they can’t pay their bills, then hopefully you provide financial support for them.”

If someone doesn’t have access to a private bathroom, Escobedo passes along instructions for how to disinfect the area. If someone doesn’t have enough food for a 14-day quarantine period, he puts them in touch with someone at Supplemental Nutrition Assistance Program to help them get groceries delivered to their door. If someone is unable to safely quarantine themselves because they live with many others also infected with COVID-19, then he calls his team leader so they can arrange to move them to a hotel.

Escobedo has had to call people multiple times and may not hear back from them for days. Once he called a family of seven and couldn’t reach a single member. But he says most people cooperate with him and understand the motive behind the city’s initiative. And the work has a side benefit: He gets to develop deeper relationships with the people in his community. Sometimes people are talkative during the calls, he said, and “sometimes they’re a little down. Sometimes they just want to talk about family,” he said.

Once when he was explaining the importance of quarantining to an elderly man who had his speakerphone on, he heard someone yell in Spanish in the background, “Yeah. You tell him! Reprimand him. I tell him all the time not to go out.” Escobedo paused and said, “Well, it seems someone is throwing you under the bus. Who is that?” The man chuckled, and then Escobedo chuckled. The man said it was his daughter. Escobedo replied, “Well listen to her, she is not wrong.”

Another time, a toddler picked up the phone and started to babble. As he unsuccessfully tried to convince the kid to give the phone to an adult, the toddler hung up on him.

Two decades of his work in the library has given Escobedo the ability to read people, and know when to ask an extra question. “Sometimes people come to the library because they need empathy, and they need somebody to put their shoulder to put their hand on. And so you learn how to navigate through emotions.”

During a conversation with a family of four, where the mother was infected with the virus, the father seemed overwhelmed with having to quarantine himself and his two daughters. Escobedo helped him make test appointments and arranged for food and cleaning supplies to be delivered to their home. Twenty minutes after Escobedo’s call, the father texted him: “Gracias amigo.”

So far, Dr. Reid has trained over 250 contact tracers like Escobedo. The city’s shelter-in-place order is helping them keep the number of cases at a manageable number. But as the city starts to gradually reopen, epidemiologists predict that cases will increase again as infected people start coming into contact with healthy people in public spaces. At that time, contact tracing will be key to controlling the spread of the epidemic. Reid and his team plan to train 20,000 tracers and case investigators in the next few weeks to expand their program to cover all of California, under new orders from Governor Newsom. This new task force will be comprised of state employees with the “the right kind of background cultural sensitivity, cultural competency, different language skills,” and “a health mindset,” according to Newsom.

“We’re not gonna end this pandemic unless we solve problems related to homelessness and health disparity.”

But Reid says contact tracing can’t function in isolation: It only works alongside mass testing campaigns. “One of the really challenging things about COVID-19 is that a lot of people are completely asymptomatic,” he said. “It’s really hard to do case investigation on somebody who’s completely well.” It’s impossible to identify the source of the spread if that person doesn’t get tested in the first place.

It may be a few exhausting weeks for Reid, but he views the effort as much bigger than stopping the spread of the virus. “I do think this is a singularly unique moment where we can change the arc of health care in America—because it’s clear that we’re not gonna end this pandemic unless we solve problems related to homelessness, and health disparity in the Latinx community in San Francisco,” he said. “I feel fairly optimistic that if you train hundreds of contact tracers—not just in contact tracing, but in the complexities of what it means to deliver public health care—we transform society.”