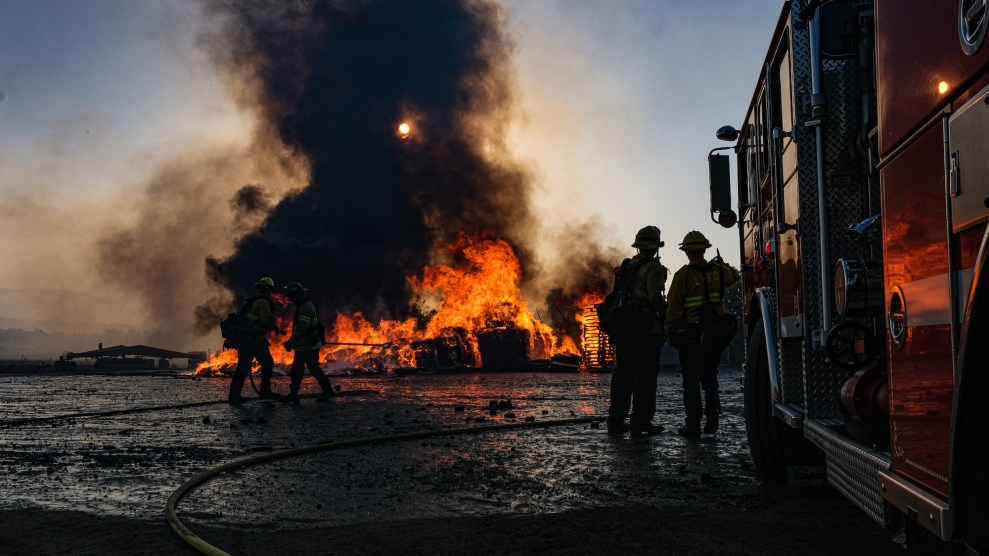 Even in nonpandemic times, the extreme weather of summer and fall takes a heavy toll on many parts of the United States. Beginning with hurricane season’s start on June 1 and until the end of fire season in the late autumn, the United States experiences one disaster after another. This year, hotter ocean temperatures could make hurricane season especially punishing. The National Oceanic and Atmospheric Administration expects severe flooding in 23 states, and scientists predict it could be the hottest year yet. As summer stretches into fall, the heat will likely fuel more devastating wildfires ripping through towns in the west.

FEMA’s work is complex, dangerous, and expensive. Now add a pandemic to the equation.

When a disaster strikes, the Federal Emergency Management Agency springs into action. If a wildfire is barreling toward a populated area, anywhere between tens and hundreds of thousands of people may need to evacuate from its path. FEMA helps build the emergency shelters—those auditoriums you see crammed with cots. FEMA workers distribute key supplies like masks, food, and water. Similarly, if there’s a hurricane threatening the southeast, FEMA sends out rescue teams to get people out of the floods and into emergency shelter, and process claims from its National Flood Insurance Program.

FEMA’s work is complex, dangerous, and expensive. Now add a pandemic to the equation.

When President Trump declared a national emergency for COVID-19 in March, he invoked a 1988 law called the Stafford Act that puts FEMA in charge of coordinating a disaster response. The declaration comes with some perks—it unlocks more possible resources for response, tapping into federal stockpiles. But FEMA faces a steep learning curve: For the first time in its history, it must respond to a 50-state emergency—all at the same time.

Meanwhile, disaster preparedness experts wonder whether the agency is up to the double-whammy task of responding to natural disasters and a pandemic. Because of coronavirus, FEMA has to rewrite its playbook. Evacuees will need to be physically separated. Workers will have to convince people reluctant to leave their homes that evacuating is safe. Medical care for injured people may be hard to come by, as hospitals are already approaching capacity with COVID-19 patients.

“It’s like fighting a World War,” says Robert Verchick, a Loyola University law professor in New Orleans, who wrote a book on the response to Hurricane Katrina. FEMA is “just not built to handle anything like this.”

Here are the major challenges facing FEMA as it stares down its toughest job yet:

Challenge #1: FEMA is already getting walloped by extreme weather.

Over the past decade, FEMA has struggled to keep up with the onslaught of severe weather intensified by climate change. And while the bill for disasters has grown, FEMA’s standing budget has stayed flat.

In 2017, the United States cleared $265 billion in devastation from three major hurricanes ranking in the top five costliest on record. At the peak of the season, in a three-week period from late August to September, FEMA was helping to shelter more than 200,000 people in mass facilities packed with beds and shared bathrooms, including 191,764 Floridians during Irma, 42,399 in Texas from Harvey, and 11,359 in Puerto Rico for Maria. FEMA deployed 17,000 staffers, and another 14,000 other federal workers, in addition to 17,790 state workers. In 2018, California experienced its deadliest wildfires ever. In 2019, the midwest and southeast saw record floods.

Even as the cost of disasters have climbed, federal and state spending on preparedness has been shrinking. The Trump administration has further handicapped disaster response with cuts to FEMA’s budget that ignores the growing threats of climate change. In 2018, searching for funding for Immigration and Customs Enforcement, Trump diverted almost $10 million in funds from FEMA’s budget.

The law that gives FEMA its mission, the Stafford Act, reiterates that the first responders are the states, which puts the federal government in the backseat until governors request help. A Republican congressional select committee studying the aftermath of Hurricane Katrina noted, “FEMA is not a first responder agency with the resources to assume principal responsibility for overwhelmed state and local governments during a disaster.”

That’s an important distinction—because it means that FEMA is more focused on responding to the aftermath of a disaster than helping states avert one in the first place. That means the agency is always scrambling to catch up. For example: FEMA’s budget is woefully inadequate for the era of climate change—its planners base it on the past 10-year average of disasters, rather than looking ahead at what’s needed, notes Columbia University’s National Center for Disaster Preparedness deputy director Jeff Schlegelmilch. “This is where climate change becomes an important political dividing line: We can’t predict the future if we don’t acknowledge it’s different from the past.”

Both the administration and FEMA itself have consistently underestimated the agency’s needs. In the agency’s report to Congress following the unprecedented hurricane season in 2017, FEMA admitted it had assumed it would need just 6,630 staff to respond at any given point to a major disaster—and that there would be just two particularly bad events that year, a vast undercount when it needed almost four times that count when there were five major disasters in 2017. And the fiscal budget the Trump administration submitted last year assumed “no new catastrophic events,” meaning disasters that are in excess of $500 million.

“The reality is in situations like that, you need an agency that pushes, that anticipates, that says, ‘hey, they haven’t asked for this, but they’ll probably gonna need it.’ You need an agency to be very proactive,” says Loyola’s Verchick. The Trump administration’s approach—across all agencies—is reactive, he said. “If they get overwhelmed, they can ask the federal government to do something about it to help them,” he says. “And that’s exactly the wrong way to prepare for a massive hurricane.”

Challenge #3: FEMA workers haven’t been adequately trained, and states won’t be able to make up for it.

FEMA has suspended its pre-hurricane season in-person training sessions to comply with social distancing guidelines—and this comes on top of a  longstanding problem of training deficits: In 2018, the independent Government Accountability Office knocked FEMA for having insufficient training and information provided to staff in the field, particularly that “FEMA staff in all 14 of our focus groups cited issues with personnel who were deemed ‘qualified’ but didn’t have the skills to effectively perform their jobs, which affected disaster assistance.” On top of the training issues, FEMA’s union said it headed into the pandemic with 20 percent of its 5,000 full-time positions vacant.

“We’re doing a lot of things that are not necessarily in any playbook that has existed.”

As states slash their budgets in the economic fallout of COVID-19, it’s unlikely they’ll be able to make up for the lack of skilled federal disaster assistance. California, the largest economy in the United States, has a robust wildfire budget for now—through June. When the new budget kicks in though it may be an entirely different story. The state’s early COVID-19 efforts cost $7 billion already, so budget shortfalls will make it harder to maintain its robust wildfire prevention.

Challenge #4: On FEMA’s path forward, there are more questions than answers.

In a letter sent April 20 by Senator Kamala Harris Rep. Jerry McNerney, 80 members of Congress posed two dozen questions to FEMA. Among them: How many staff would be available to deploy given their priority to fight COVID-19? How does the agency plan to scale up? How will it continue to train staff and have contingency plans if staff fall ill?

FEMA director Peter Gaynor has admitted that there are no clear answers to these questions. In a recent interview with Nashville TV station WKRN, he said, “Typically we put people into congregate shelters. It can be tight and packed in. But now, you have to use social distancing, you have to think about hygiene, about all of those things we took for granted before COVID-19.” Over the next few months, FEMA will have to reinvent its approach to disaster management—as it heads into its busiest season. Gaynor added in a separate interview with Axios, “We’re doing a lot of things that are not necessarily in any playbook that has existed.”