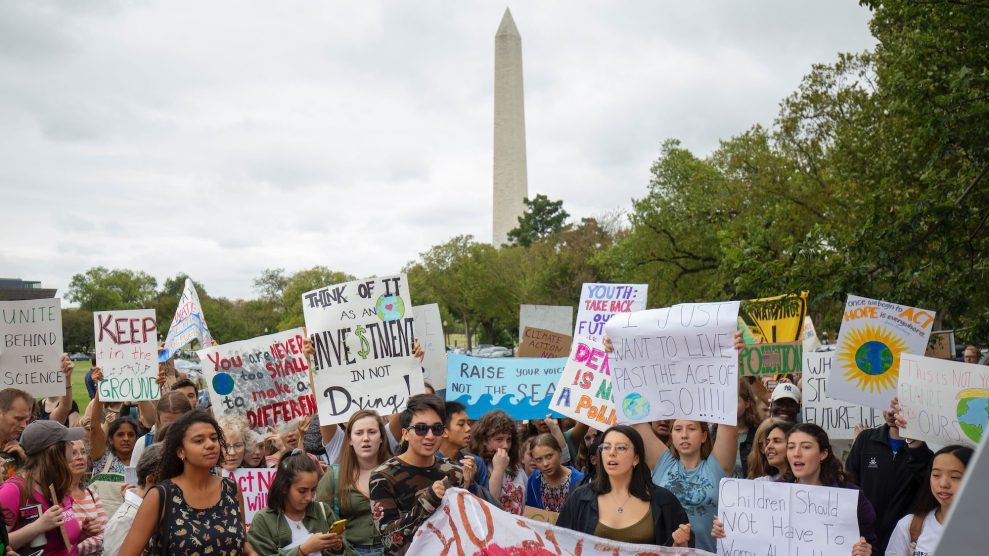 Teenagers and students take part in a climate protest outside the White House in September, 2019.Alastair Pike/Getty

Back in 2017,  Jamie Margolin, a Seattle high school student, founded an organization called Future Voters for 350ppm. (“Future voters” meaning young people who can’t vote yet, and “350 ppm” referring to a safe level of atmospheric carbon dioxide that the world blew past long ago). But things didn’t go as planned, and the group ended up being short-lived.

“Keep failing and failing until you get it right,” Margolin writes in her book Youth To Power, released on June 2. “My failure with that organization was the precursor to starting Zero Hour. So it all paid off.” Soon afterward, Margolin co-founded Zero Hour, a youth-led nonprofit that advocates for climate action and environmental justice and organized the Youth Climate March in Washington, DC, in 2018.

Her new book serves as a step-by-step guide to becoming a youth activist for any cause. Margolin, now 18, discusses how to lobby, volunteer for a campaign, manage a nonprofit, write press releases, and more. Margolin interviews a diverse field of youth activists advocating for different causes—such as Black Lives Matter, indigenous rights, disability rights, and ending gun violence—to get their advice on how to be a successful youth activist.

Young people, Margolin writes, have fresh energy and possess a profound power to create change. She explains how they have played a major role in sparking political change throughout American history, from the civil rights movement in the 1960s to the Standing Rock protests that started in 2016. Last year was momentous for young climate activists—and as another crisis, the COVID-19 pandemic, wreaks havoc on the planet, the youth are still finding ways to keep the momentum going through virtual platforms.

Youth to Power includes a foreword by Greta Thunberg, the 17-year-old climate activist who sparked a worldwide youth climate movement by skipping school every Friday to protest outside the Swedish Parliament building. “This book is your toolbox,” Thunberg writes. Here are some of the book’s best tips.

Find your “why.” The first step to your activism journey may involve some soul-searching. According to Margolin, your why isn’t exactly a specific goal, but rather the core, driving reason you’re taking action. She became a climate justice activist, for instance, to protect her Pacific Northwest home and future generations from climate change.

Find your allies. Joining an organization, a community group, or political campaign that fights for the same cause as you will help you learn more about an issue and see how these kinds of organizations are run. “Share the workload, share the burden,” said Pidgeon Pagonis, 33, an LGBTQ+ rights advocate and one of the activists Margolin talked to. “The best work happens when you’re doing it in solidarity with community.”

Be loud. Sara Jado, an 18-year-old Black Lives Matter activist, told Margolin, “If someone tells you you’re too loud, tell them, ‘Well, you’re not being loud enough about these issues.'” Join protests, be outspoken, and raise awareness in physical spaces or online platforms. You don’t need a big platform to make changes, she says. “Organizing isn’t about the followers you get, it’s about the change you make in the community.”

Be creative and tell a story. Think outside the box. If you’re an artist, use your art to send a message. When lobbying, tell a compelling story or narrative instead of simply stating facts and numbers, Margolin writes. For rallies, get creative with signs, come up with clever slogans, or write a song. “If you authentically convey your message in art, people will gravitate to what you’re making,” Sofya Wang, a 21-year-old queer Asian advocate, told Margolin.

Make time. Fitting activism into your busy life with school, friends, and family can be a challenge. “It’s not about having time, it’s about making time,” Margolin writes. She also advises not to multitask and to be fully present in whatever you’re doing.

Search for healthy escapes. Activism can take a toll on your mental health, and burnout is real. When you’re tired, take a breather. It’s important to stay healthy, because you are needed in this fight, Margolin writes. “If you keep moving fast, you’re going to become depressed and burn out,” Malia Hulleman, 24, a Kānaka Maoli environmental defender, told Margolin. Hulleman says to take it day by day, as her elders advise, and know that you’re not alone.

“This is the manifesto of the youth revolution,” Margolin writes in the introduction of her book. “Dog-ear it, write in it, read it out of order, highlight what you want, rip out pages and tape them to your bedroom wall. Keep reading, and we can be scrappy activists together.”