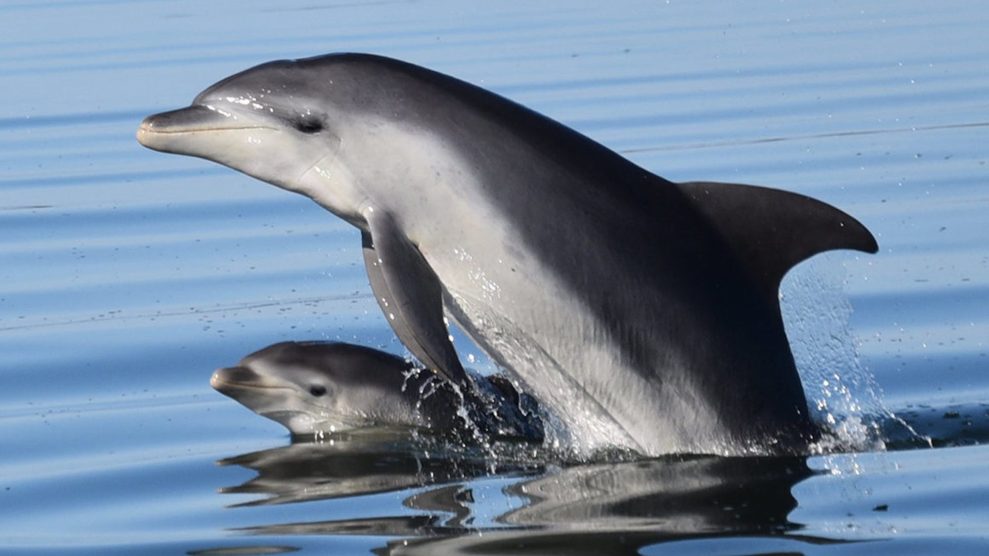 Researchers hope to better understand how calves communicate with their mothers.Marine Mammal Foundation

The calm waters of Gippsland Lakes near Melbourne, Australia, are broken by a fin, then the quiet afternoon is pierced by a high-pitched whistle. A Burrunan dolphin has breached the surface before diving down and emitting the sound, which, ordinarily, would be received only by other aquatic animals. This time, however, the dolphin’s signal is picked up by a team of scientists, for whom the coronavirus pandemic has had a silver-dorsal lining.

In the past, their recordings of dolphin communication have been occluded by the whirs, clunks, and splashes from boat traffic in this lake system, which is just a few hours by car from a city of five million people. But lately, both above and beneath the water, there has been uncommon silence.

With Melbourne still working its way out of a long, strict lockdown, human activity has plummeted in this cluster of pristine lakes, lagoons, and estuaries, which stretches along the Victorian coast for more than 40 miles, partially separated from the Tasman Sea by sand dunes.

The reduction in noise has gifted Marine Mammal Foundation (MMF) scientists rare underwater quiet, and an unusual opportunity to effectively record and interpret the language of endangered Burrunan dolphins for the first time. The founding director of this Australian nonprofit, Kate Robb, was responsible for the classification of the Burrunan as a unique species of bottlenose in 2011. (A recent paper has disputed that the Burrunan is a distinct species, though Robb says it is “very widely accepted” as its own species among her peers.)

Before then, there were only two known species of bottlenose in the world—the common bottlenose and the smaller, lighter-colored Indo-Pacific bottlenose. Robb analyzed genetic samples of some of the 185 Burrunan dolphins in Gippsland Lakes and Port Phillip Bay, which flanks Melbourne, and found they match neither of those two identified species.

MMF scientists have studying the Burrunans for more than a decade, but the pandemic quiet has only just made it possible, via 3,000 hours of clear recordings of the animal’s noises, to begin to understand what the aquatic mammals have been saying. Robb says the recordings reveal each Burrunan has a “signature whistle”—a unique greeting to other dolphins, akin to them saying their own names. The recordings are also starting to uncover complex relationships between members of the pod, some of whom had been close friends for up to 14 years.

Decoding animal communication has long fascinated humans and dolphins, as one of the world’s most intelligent creatures, have been the focus of many such studies. A central goal of this work has long been to finally identify the outlines and complexity of dolphin communication—and determine whether it is a language humans can understand.

Communication and language are, of course, two very different things. The former broadly refers to the transmission of information, which can be as simple as an animal baring its teeth to convey aggression. Language, by comparison, is communication using complex systems of symbols, words, or other signals.

For decades, scientists have known dolphins emit sounds in sophisticated patterns. They release high-pitched whistles to message other dolphins, make burst-pulse signals when socializing, and release clicking noises for echolocation.

According to Laela Sayigh, from Woods Hole Oceanographic Institution in Massachusetts, who is not involved in the Burrunan research, identifying which dolphin in a pod is vocalizing at a particular time is key to deciphering their communication systems. “Without knowing who is the sender or intended receiver, it is very difficult to interpret their communication signals at a fine-grained level,” she says. “There are also challenges in classification of their sound types, as there is no system shared by all researchers. We know a lot about individually specific signature whistles of dolphins, thanks to a long-term research program in Sarasota, Florida. But we know very little about most of their other signals.”

Matching a specific whistle, click, or burst-pulse to a particular dolphin is a pivotal element of MMF’s Burrunan project. To do this, Robb says, her researchers drop hydrophones into the water to record the sounds they hear, and correlate them with the behaviors they observe. Similarly, at night, more is captured with sound traps, passive acoustic monitoring stations placed on the bottom that let the MMF team “eavesdrop on the dolphins 24 hours a day,” Robb says.

The full repertoire of noises will help reveal the routines and relationships of the Burrunan. Of particular interest will be the interactions among dolphins while mothers are calving. Robb says they hope to confirm that calves use specific whistles solely for communicating with their mothers. They also aim to identify and decode dolphin noises linked to mating and feeding. This would aid in understanding how the Burrunan utilize their habitat—which parts of the Gippsland Lakes they use for which activities and at which times of year.

“That will inform us as to whether the dolphins need protection in certain areas at certain times of year,” Robb says. “We’re not just trying to understand dolphin communication, we’re also looking at conservation, at the human behaviors that impact the dolphins, so that we can recommend new policies to protect them.”

Robb says it will take many months to analyze their underwater recordings, with machine learning programs helping to isolate the dolphin sounds in a way they never have been before. “Everything we’re finding is new and unique because the Burrunan is a new species, so in terms of doing the full deciphering of their communications we’re only just getting started,” she says. “There’s a big job ahead of us but we can’t wait to see what the dolphins reveal to us. We’ve got a rare opportunity due to the pandemic and we are taking advantage of that.”