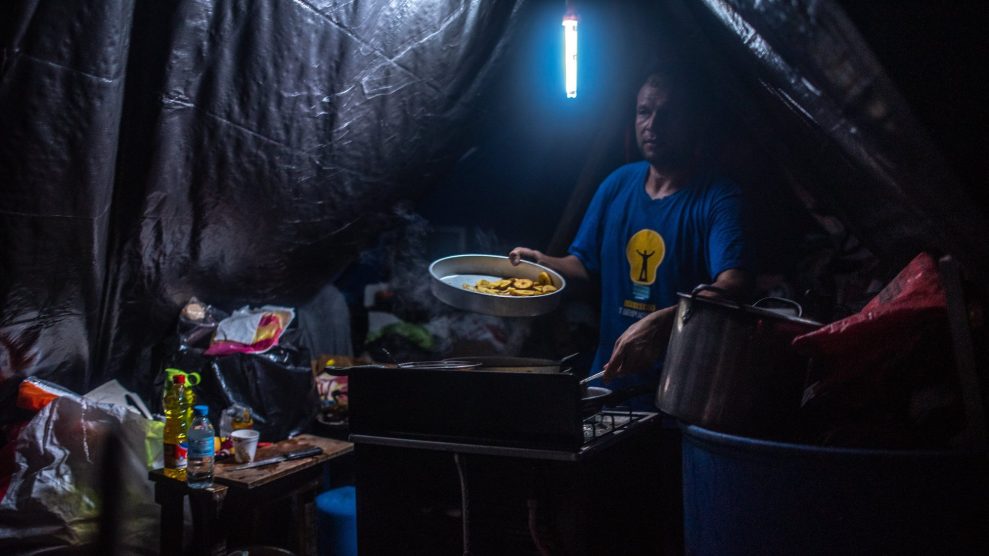 A man, displaced by Hurricane Eta in Honduras, cooks plantains in a refugee camp along the median of a highway in San Pedro Sula.Seth Sidney Berry/Zuma

This piece was originally published in Bulletin of the Atomic Scientists and appears here as part of our Climate Desk Partnership.

When it comes to dealing with floods, droughts, heat waves, or other adversities that our lively planet throws at us, one classic solution for humanity has always been to simply pick up and leave. Mobility has always been a strategy for humans to deal with climate changes, whether they be seasonal shifts, regional droughts, or mini ice-ages.

And we are all potentially vulnerable to displacement, whether it be temporary evacuation, regular movement throughout the seasons, or a more permanent relocation.

But what happens when huge numbers of people must leave, in unprecedented numbers—so-called “climate migrants”—as is already starting to occur with climate change? How do we not only react defensively to people on the move, but also proactively advocate for what I call “mobility justice?”

These questions are exacerbated by the fact that while we are ultimately all potential climate migrants, we are not all equally responsible for climate change. Some of us have high-energy lifestyles with excessive carbon emissions, causing climate displacement around the world. Those of us in the industrialized regions of the Global North (a term that loosely refers to more developed societies characterized by wealth, technological advancement, political stability, low population growth and dominance in world trade and politics) consume more energy and more fossil fuel than most people in the world, with the wealthiest 10 percent consuming much more.

Because of this situation, researchers such as University of California at Berkeley legal scholar Daniel Farber have argued that Americans are “responsible for a disproportionate amount of greenhouse gases and that we have benefited… from uncontrolled greenhouse emissions that have enabled our energy-intensive lifestyle and corporate profits.” Consequently, Americans have a moral obligation to compensate others displaced by climate change due to our collective failure to take reasonable measures to limit our emissions. Some governments in Latin America refer to this as a “climate debt” that developed countries owe to the Global South.

Americans have a moral obligation to compensate others displaced by climate change due to our collective failure to take reasonable measures to limit our emissions.

But what is the nature of climate debt, and how would people living in Western Europe, North America, Australia, or New Zealand direct such compensation to the right recipients?

First, there is the matter of how we frame the problem in the first place. Second is the issue of how such compensation should be allocated and structured. Let us look at each of these items in turn.

Reframing climate debt. By understanding climate displacement as something driven by our fossil-fueled way of life in the Global North, we begin on a better footing to discuss the reception of people displaced by climate change. For mobility is not just about movement, but is also loaded with meanings, values, and forms of justification. The term “climate refugees” has been appropriated by reactionary politicians into discourses about national security that drive a fear of refugees “flooding our shores.” Fear spirals downward into wall-building, internment camps, separation of children from their parents at the border, and the deaths of thousands of people in the Sonoran desert or on the Mediterranean Sea.

Instead of thinking of people displaced by heat, drought, or natural disaster as ‘climate refugees’ coming to inundate ‘us,’ we should think of a relationship in which some people’s everyday mundane mobilities drives other people’s more extreme need to move. Both can be considered part of “Anthropocene mobilities,” indicating the permanent human transformation of the Earth system. It is “fossil-fueled infrastructures of air travel, automobility, suburbanization and consumerism…” that drive climate disruption and lead to migration, as Andrew Baldwin, Christiane Frölich and Delf Rothe wrote in From Climate Migration to Anthropocene Mobilities: Shifting the Debate. Picking up and moving under duress is not just a natural calamity, but the social and political outcome of other people’s high-energy mobile lifestyles.

This subtle change in framing the problem generates new conversations and potentially new policies around the responsible reception of climate migrants, and what it might mean to have open borders in a world beset by climate disasters. We already have an ethical and legal obligation to adhere to United Nations’ conventions around the right to movement, the reception of refugees, and the protection of people from having to return to deadly situations. Now climate instability has made life in many parts of the Earth deadly. Don’t we in the Global North also have a moral obligation of reparations for loss and damage because of our climate debt?

Rather than the exclusionary lockdown of borders that is happening around the world, we should focus on the question of responsibility and reparations, in a moral, legal, and financial framework under international law. The growth of a system of deadly corridors, detention camps, and spaces of confinement at our borders is an illegal, ineffective, and immoral response that needs to be subjected to critical analysis and alternative frameworks before it becomes the de facto response to all future migrations.

The first is known as “corrective justice,” and refers to a negotiation between governments within an international jurisdiction. Under this scenario, the collective moral responsibility of high greenhouse gas-emitters to make financial recompense to climate creditors forms the legal basis for holding the United States or the European Union morally accountable for a calculable and bearable share of the harms of climate change. This approach offers a financial mechanism by which the reception of migrants could be handled through an international Green Climate Fund.

Climate reparations between nations would enable “creditor countries”—such as small island states—to strengthen their resilience by funding disaster risk reduction, insurance, and adaptation to help people remain in place. One practical mechanism for this would be an international compensation commission, which would receive claims from countries that have incurred adaptation expenses, using as a template the United Nations Claims Commission—which was established after the first Iraq War to handle claims against Iraq for war-related damages.

The second and quite different pathway to climate compensation is through tort litigation for loss and damage against the major fossil fuel companies—in other words, suing the oil companies. (A tort is an act or omission that gives rise to injury or harm to another.) Through class action law suits filed under multiple jurisdictions, reparations could be sought for those harmed by greenhouse gas emissions, and corporations could be held responsible for specific injury, especially if they knew about it and covered it up—a strategy that worked against tobacco companies. “The call for compensation for loss and damage is also supported by well-established rules and principles of international law, including the right to reparations for injury resulting from violations of international law” wrote Margaretha and Salili. According to key legal arguments they issued on behalf of the low-lying and vulnerable country of Vanuatu, the Warsaw International Mechanism for Loss and Damage offers the best opportunity for loss and damage finance, under the auspices of the United Nations Framework Convention on Climate Change.

Under this “loss and damage” legal approach, states could also put pressure on companies by adopting legislation making it mandatory for fossil fuel companies to provide compensation through payment of a so-called climate damages tax, under the rationale that such a tax would be based upon how much carbon dioxide is embedded within each ton of coal, barrel of oil, or cubic liter of gas that each fossil fuel company extracts. Vanuatu’s submission provides an indication of the range of activities that could be covered by such a fund, including:

All of these actions could help people remain in their homes and build climate resilience.

Lastly, there is also a deeper moral case for climate reparations based on the long-term effects of systems of colonial, racial capitalism and the exclusion of Black, Brown and Indigenous people from full citizenship. It turns out these groups are the most vulnerable to climate displacement within the United States. The call for “abolitionist climate justice” entails dealing with historical environmental racism and intersectional drivers of precarious lives, social trauma, and displacement beyond those narrowly associated with “climate.” It embeds climate debt in longer historical timeframes of infrastructural reparations.

Whether we take a state-centric climate reparations approach, a market-centered climate damages approach, or a decolonial abolitionist approach, we must reject the depiction of climate refugees as a growing danger who will “flood” our borders. It is “our” way of life that has put people in harm’s way, both within the United States and beyond our borders. One day we all may be climate migrants, so we also owe it to ourselves to reduce our greenhouse gas emissions and prepare fair international mechanisms for temporary shelter and permanent resettlement.