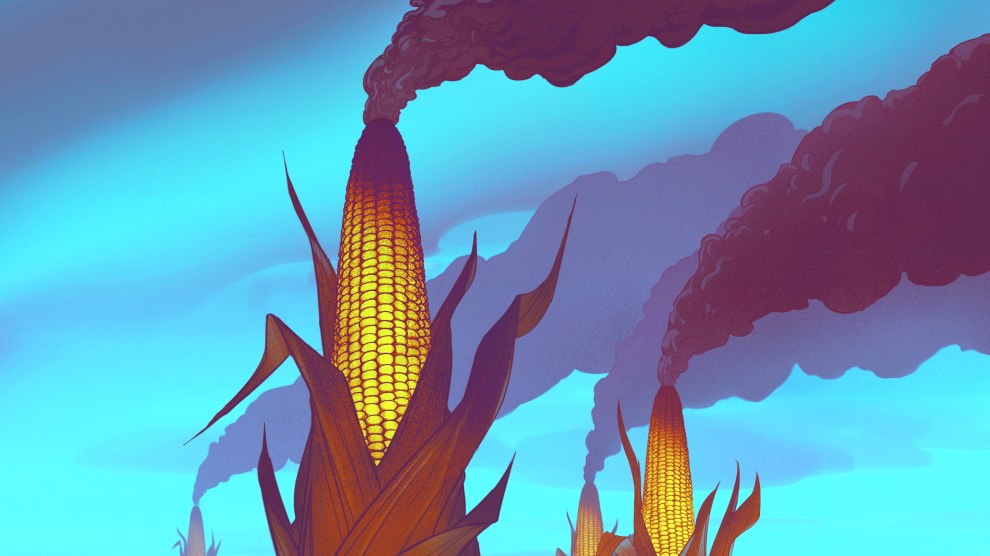 President Joe Biden campaigned on an ambitious plan to tackle climate change with a “clean energy revolution,” including incentives to phase out gas-powered cars in favor of electric ones. The growing consensus among climate experts is that to slash carbon emissions quickly enough, we need to eliminate as much air-fouling combustion as possible while expanding wind and solar energy to power the grid. But a key aspect of Biden’s agenda contradicts this push: He’s vowed to “promote ethanol and the next generation of biofuels,” declaring them “vital to the future of rural America—and the climate.” Biden tapped longtime ethanol champion Tom Vilsack—former governor of Iowa, the fuel’s Saudi Arabia—to run the Department of Agriculture, a post he held under Obama.

Biden is doubling down on a bad idea that has flourished since the days of President George W. Bush.

In doing so, Biden is doubling down on a bad idea that has flourished since the days of President George W. Bush. Shortly before declaring the nation “addicted to oil” in 2006, Bush pushed through a bipartisan law with a “renewable fuel standard” that effectively mandated a dramatic ramp-up in corn ethanol production. As a result, the portion of the massive US corn crop devoted to the fuel rose from 11 percent in 2004 to 30 percent in 2015, where it has held steady. Barack Obama and Donald Trump both joined the pro-ethanol presidential chorus.

Today, corn-based ethanol has replaced about 10 percent of “climate change causing petroleum” at the gas station, boasts the website of the American Coalition for Ethanol, the industry’s main lobbying group, adding that ethanol production “supports 360,000 jobs in rural communities.”

Even though it was once embraced by some environmentalists, ethanol has turned out to be much better at providing common ground for wildly disparate presidents than cutting greenhouse gas emissions. For starters, corn does a lousy job of turning the sun into fuel. Plants store just 1 percent of the solar energy they receive via photosynthesis, notes Mark Jacobson, professor of civil and environmental engineering at Stanford. A solar panel, by contrast, is 20 percent efficient. “So you put a solar panel over the same land, you get 20 times more energy,” Jacobson says—energy that could go toward a grid to power electric cars.

But Bush’s federal ethanol mandate tied us to internal combustion engines, which spew a range of disease-causing toxins along with heat-trapping carbon dioxide. Electric engines not only avoid tailgate fumes, they’re also much more efficient. According to the Department of Energy, conventional vehicles convert at most 30 percent of the energy stored in liquid fuel to horsepower; the rest leaks out, mostly as heat. Electric-powered vehicles, meanwhile, convert at least 60 percent of energy expended to locomotion.

Meanwhile, EV battery technology is improving rapidly, meaning cheaper electric cars with longer ranges between plug-ins—solving two problems that have held back electric car sales for years. From 2010 to 2020, battery prices plunged 89 percent. By 2023, according to a projection by Car and Driver, electric vehicles will be no more expensive than their fuel-burning competitors.

In short, maintaining ethanol production at current levels means propping up a wildly energy-wasting technology. For that to make sense as climate policy—the Intergovernmental Panel on Climate Change warns that we need to cut global carbon emissions by 45 percent by 2030 to avert catastrophe—ethanol would have to be magical stuff indeed.

From a greenhouse gas emissions perspective, the renewable fuel standard has been a bust.

Spoiler: It’s not. From a greenhouse gas emissions perspective, the renewable fuel standard has been a bust, says Jason Hill, a professor at the University of Minnesota’s Department of Bioproducts and Biosystems Engineering. By displacing petroleum, the ethanol mandate made conventional gasoline cheaper, which made people drive more while buying less-fuel-efficient vehicles. As a result, Hill and two colleagues found in a 2016 paper, the net effect of the law was to increase greenhouse gas emissions from cars by about 22 million metric tons of carbon dioxide annually, equivalent to the output of nearly six coal-fired power plants.

The environmental footprint of industrial-scale corn farming is another stain on ethanol’s claim to be a green fuel. Corn typically covers about 90 million acres of farmland—an area nearly the size of California. Fertilizing the crop emits nitrous oxide, a greenhouse gas nearly 300 times more potent than carbon,  as well as nitrate pollution that fouls water from the upper Midwest to the Gulf of Mexico, where it generates a low-oxygen dead zone larger than Connecticut. Hill and his colleagues have found that nitrogen fertilizer applied to corn also results in emissions of ammonia, a powerful pollutant, that have been associated with a staggering 4,300 premature deaths yearly in the United States.

But what about the 360,000 jobs in rural communities supposedly supported by the ethanol industry? According to David Swenson, a researcher at Iowa State University’s Department of Economics, that’s more industry spin. To reach that number, ethanol boosters include a portion of all corn farmers and their employees in their calculations. But corn was a wildly overproduced crop when ethanol took off in the early 2000s. The ethanol boom mostly created a market for surplus corn, not new jobs. Swenson estimates the ethanol industry is directly responsible for only about 47,000 jobs, a tiny fraction of rural employment, even in corn-heavy states like Iowa. Meanwhile, the Energy Department reported in 2017 that solar energy alone employs more Americans than oil, coal, and gas combined.

With the rise of cheap electric car batteries and the expansion of renewable electricity, ethanol looks like yesterday’s fuel. In 2022, the current renewable fuel standard will lapse, and Biden’s Environmental Protection Agency will have to decide whether to maintain federal support for this hangover of the oil-soaked Bush era.