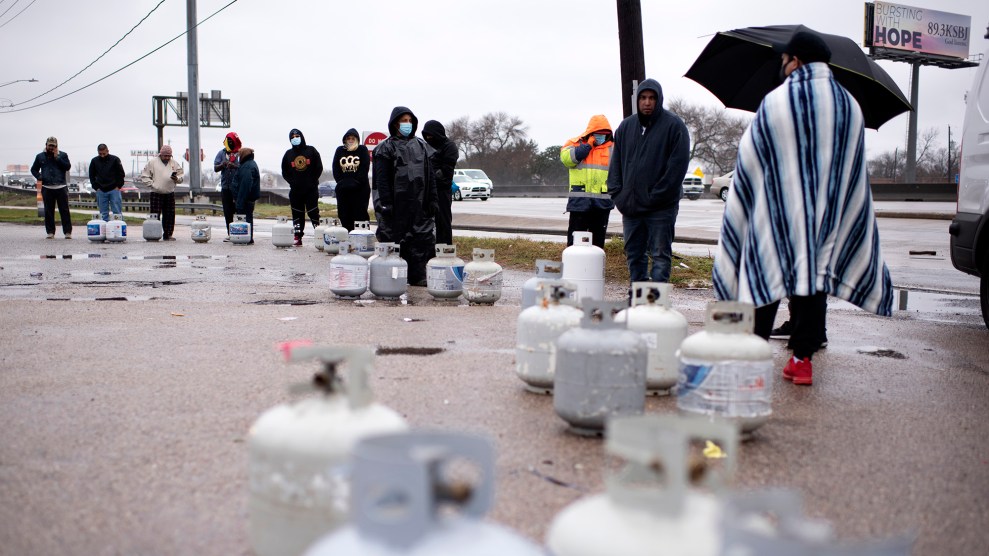 Propane tanks are placed in a line as people wait for the power to turn on to fill their tanks in Houston, Texas on February 17, 2021.Mark Felix/The Washington Post/Getty

On the first day, snow and sleet trapped our cars in an inch of ice. We lost power. The temperature inside plunged from 72 to 45 (and in some rooms it went below freezing). The next morning, when I was eating a burrito I’d made on a gas stove, the only utility still working, I heard what sounded like someone taking a shower upstairs. I ran up to see a torrent of ice-cold water falling into a bathroom from the ceiling. By the time I got downstairs, leaks were forming all over the first-floor ceiling. Our water pipes had burst.

Everyone had stories like this. A neighbor’s second floor caved into the first floor from their own burst water pipe. A few blocks over, a friend’s water heater crashed through their attic into the kitchen. Across Texas, houses flooded and apartments fell apart. In the suburbs of Houston where I live, I saw neighbors scrambling to shut their water off, pack their families into cars, and flee. No pipes meant no water. Food was getting harder to find as icy roads and widespread power outages interrupted supply chains. There was no help, it seemed, as Texas’ infrastructure hurdled to total breakdown.

It’s been just four years since Texas’ last “once in a century” disaster, and it’s the latest in a long line of previously unthinkable climate catastrophes along the Gulf Coast region. After each one, the recovery effort seems to go slower, take longer, and leave more people in the cold. Just last August, Hurricane Laura forced half a million to evacuate their homes as the storm ripped through the coast—causing particular harm in the Lake Charles, Louisiana, area, three hours from Houston. It was one of five storms that came ashore in Louisiana: About a month after Laura, Delta left mass devastation again in Lake Charles. Then a few weeks later, Zeta knocked out power in New Orleans for almost a week. The Gulf Coast has been cycling between crises with a growing awareness that it’s no longer treading water, but entering a slow death spiral. New Orleans, with its stalled recovery effort from Hurricane Katrina, is a local lesson. The city was never even given a chance to recover. Abandoned concrete towers in its downtown now cast shadows over the rest of the skyline.

For us, the ice storm was watching the infrastructure fail, and our leaders fail, once more. It was hell. And it has begun to feel like a never-ending one.

I learned that evening that Texas runs on its own power grid operated by a nonprofit called the Electric Reliability Council of Texas (ERCOT), and it was experiencing massive failures as coal and natural gas plants had partially frozen. The area ERCOT powers quickly came to demarcate the borders of our humanitarian disaster zone. (Now, we know that deregulation and a market-based approach led to not only disaster but profit. Massive energy bills are being handed down to customers throughout Texas for trying not to die.) My mom and I had managed to shut our water valves off early enough to prevent a total cave-in, but cracks formed all over the house. My feet, sloshing in the sour leaking water, were still numb.

Two days after my water pipes burst, I asked my friend, who is a nurse at a large trauma center in Houston, how her hospital was doing. She told me there was some power but no water pressure. “Patients are sick with everything, some normal stuff, some stuff specific to this situation,” she said, noting entire families with carbon monoxide poisoning, house fires, people without dialysis, or home oxygen. “Desperate desperate people, people dying.”

Her hospital, like others across Texas, were not only overwhelmed with patients but critically under-resourced to handle them. Almost half of the hospitals in southeastern Texas declared themselves suffering through “internal disasters” to dissuade ambulances from delivering patients. She said doctors and nurses were finding patients lying down on the floor of their homes for long stretches without food, water, or attention.

“No one is able to check on them, help them with their chronic medical conditions. So just by the time they get to us they’re so so sick.” She text me two days later letting me know the ER was still overflowing with patients and their water remained unsafe for medical use due to the breakdown of Texas’ water treatment facilities.

Without a meaningful ground presence by the local, state, or federal government, Houstonians turned to mutual aid groups who were aggressively deploying whatever resources they could despite their own homes facing collapse, floods, fires, and freezing cold leaks.

I got into contact with Felix Kapoor, an organizer with West Street Recovery to try to interview him about the relief effort. The organization was set up initially after Hurricane Harvey flooded Houston with a record rainfall in 2016, but it had since become permanently mobilized when the rebuilding effort stalled and further climate crises hit Houstonians.

The interview dissolved shortly after it started.

I mentioned to Kapoor that my mom was hunting for new pipes outside the ERCOT disaster zone in Lake Charles, a full 170 miles from our house. “Could she get us some parts?” Kapoor asked quickly. I called and asked her. Kapoor told me what West Street needed. We coordinated to get PVC, CPVC, and copper pipes with couplings, which had already virtually disappeared from store shelves due to a run on plumbing material.

There was no point in trying to get a bird’s eye view of this crisis. My drinking water was running low, my power was off, and my house was falling apart. The crisis was enveloping me, my family, and my entire community. Throughout the state, food and water had disappeared from shelves, gas stations were closed, and no one could find any propane or butane to keep their space heaters on.

I texted with my grandparents, who are in their 80s. They’d been trapped alone in their house in College Station, Texas, for days with rolling blackouts. The inside of their house was hovering just above freezing. My grandmother’s appointment to get vaccinated was canceled.

“I’m curious,” Kapoor told me over text one night, as interview lines continued to blur. “How many lives will it take or how many dollars of damage will occur before our elected officials realize that Houston needs to invest large attention and resources on disaster preparation?”

I could barely parse the words. My body ached. I hadn’t showered for a week. My eyes shut. I awoke to see the official death hit 47, with many more likely to be added in the coming days.

More and more of our lives along the Gulf are being twisted around trying to survive crises, then trying to rebuild with whatever pittance we make from our poverty wages, then preparing for the next storm knowing in the back of our heads we have no one but ourselves to rely on. Groups like West Street Recovery, initially organized to respond to one disaster event, are becoming mainstays. These crises are coming so often that they’re building on each other, flooding homes already weakened from last year’s hurricane season, or pushing over the skeleton of a local business that was deserted after a storm.

What does recovery mean for us if the storm never stops? The only way to know a storm is not hitting you is if it’s hitting someone else. In November, I had driven through Lake Charles and seen piles of bricks blocking streets, hollowed-out carcasses of buildings sitting beside open businesses whose signs had been blown off their facades. I’d seen houses growing dark with mold bent to one side, and chunks of sheet metal laid in untilled fields by the highway. Now, my mom was waiting in line to buy plumbing supplies there, and she overheard a local Lake Charles resident quip from behind her, “Hey, at least we’re not in Houston.”

An earlier version of this article misidentified the location where medical professionals found people ill and unattended for long stretches of time. They were found in their homes.