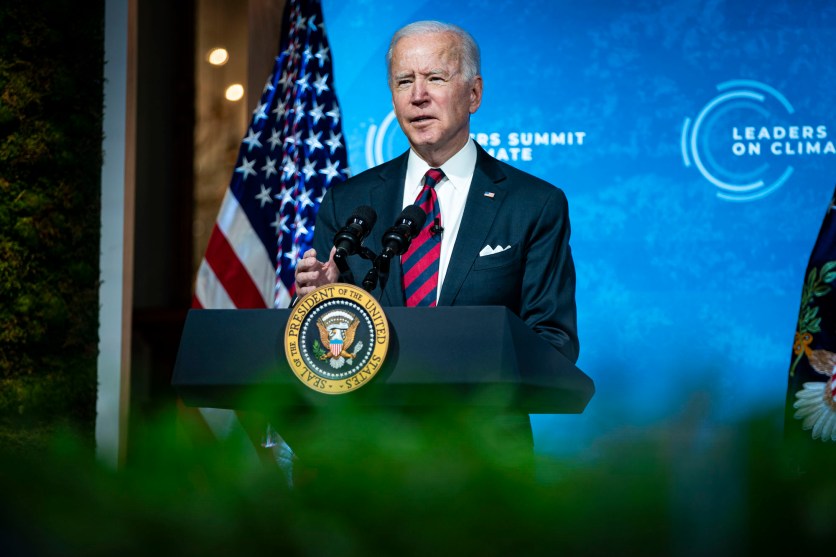 President Biden today addressed 40 world leaders at a virtual climate summit, emphasizing the urgency of the climate crisis and announcing plans to reduce US emissions by 50 to 52 percent by 2030.

“By maintaining those investments and putting these people to work, the United States sets out on the road to cut greenhouse gases in half—in half—by the end of this decade,” Biden said. “That’s where we’re headed as a nation.”

“The cost of inaction keeps mounting.”

The Leaders Summit on Climate, kicked off on Earth Day, will take place virtually April 22 and 23, and includes heads from the world’s largest economies, including China, Russia, and the 17 countries that together comprise 80 percent of global emissions.

The announcement came as Biden is still seeking to re-establish the United States as a leader in the fight against the climate crisis and undo the Trump administration’s rejection of climate actions and withdrawal from the Paris Climate Agreement.

The United States rejoined the Paris Climate Agreement in February, shortly after Biden unveiled the most ambitious climate policy in US history.  Rapid shifts in US climate policy have left world leaders uncertain about the longevity of US commitments to tackle climate change.

Against this backdrop, Biden laid out ambitious climate objectives and a vision of a thriving green economy, emphasizing a path to cutting carbon emissions that created jobs and embraced the middle class.

Meant to underscore the “urgency—and the economic benefits—of stronger climate action,” the summit aims to galvanize “efforts by the world’s major economies,” reduce emissions and transition to a clean energy economy, and address the socioeconomic impacts of climate change and natural disaster.

Biden also emphasized the key goal of keeping warming within 1.5 celsius, which scientists emphasize as the cutoff point to prevent the most extreme impacts of climate change.

“This is the decisive decade,” Biden said. “We must make decisions that will avoid the worst consequences of the climate crisis. Countries that take decisive action now to create the industries of the future will be the ones that reap the economic benefits of the clean energy boom that’s coming.”