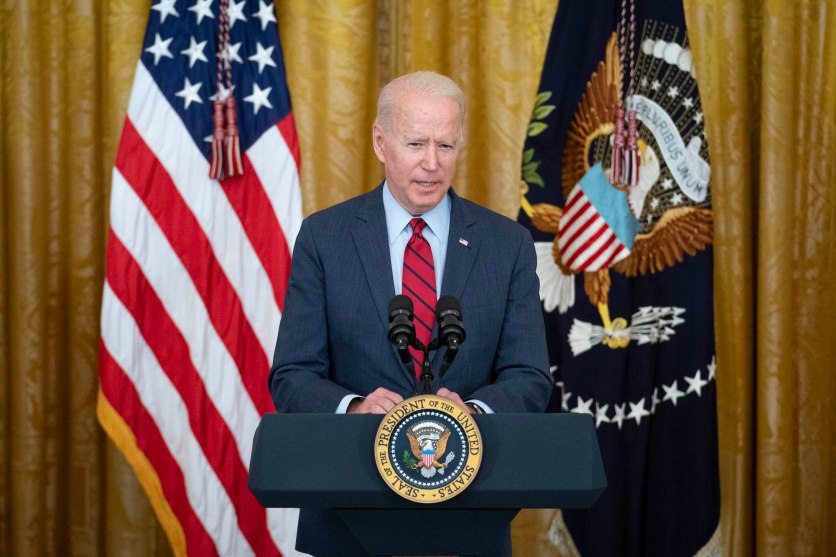 President Joe Biden delivers remarks on deals made by a bipartisan group of Senators on the infrastructure plan in Washington, DC. Thursday, June 24, 2021. Sarah Silbiger CNP/ZUMA

A day after President Joe Biden endorsed a deal that pares down his signature infrastructure package in a bid to win Republican support in the Senate, one of his top environmental allies is preparing to rally for stronger climate measures.

The League of Conservation Voters on Friday told HuffPost it will spend $8 million deploying more than 100 staffers to eight states in hopes of rallying support for a more aggressive federal program to pay for climate upgrades and clean energy. The effort marks the group’s biggest ever field campaign during a non-election year.

“This field effort is about making sure members of Congress see and feel and understand their constituents’ desire for big action on climate change,” said Pete Maysmith, the senior vice president of campaigns at the League of Conservation Voters.

The lawmakers the group is targeting are “folks we think this kind of program will help reinforce and spur ambition” for policies to cut emissions. While conservative Sen. Joe Manchin (D-W.Va.) is widely seen as one of the biggest obstacles to getting Democrats to vote in lockstep and use their narrow majority to pass legislation, the League of Conservation Voters does not have an active chapter in West Virginia, Maysmith said.

According to the Sunrise Movement: By agreeing to water down the package,

The bipartisan package that Biden endorsed Thursday totals about $1.2 trillion over eight years, and contains $579 billion in new federal spending on narrowly defined projects such as roads, bridges, airports and waterways. Five Republicans and five Democrats negotiated the deals, and 20 senators in all now support it. But that’s still far short of the 60 votes needed to overcome a filibuster, and some progressives have stopped short of promising their votes amid fears that the package will privatize public goods and impose more fees and tolls on Americans.

Green groups panned the proposal on Thursday. Greenpeace lamented that it has “yet to see real action” from Biden and Congress on climate. The Sierra Club demanded that Congress pass a “bold infrastructure package that tackles the climate crisis before moving any bipartisan deal.” Sunrise Movement said that by agreeing to water down the package, Democrats were “condemning Americans to untold devastation.”

“This bipartisan proposal is not the climate bill, and no one should pretend otherwise,” Jamal Raad, executive director of the climate group Evergreen Action, said in a statement. “The bipartisan framework comes nowhere near the scale and scope of investments that we need to meet the climate crisis. Climate leaders in Congress should reject this deal unless it’s accompanied by a reconciliation bill with bold climate investments.”

Sen. Elizabeth Warren (D-Mass.) told HuffPost on Thursday that the deal is just one half of a total package Democrats plan to pass through budget reconciliation, a process that allows them to circumvent the filibuster and pass legislation with just the party’s 51-vote majority. House Speaker Nancy Pelosi (D-Calif.) said Thursday afternoon that she would wait until the Senate passed both halves of the infrastructure package before holding a vote in the lower chamber.

A survey last week from the environmental group Climate Power and the think tank Data for Progress found 86% of Democrats, 55% of independents and 23% of Republicans support the original $2 trillion package that Biden proposed, as they understood it. When provided additional details about the proposal’s funding for renewable energy and environmental cleanup, overall support climbed from 57% to 65%. The biggest increase was among Republicans.

In the meantime, canvassers from the League of Conservation Voters plan to start papering the local cafes and restaurants that congressional staffers are known to frequent with materials that read “Climate Action Now!”

“We’re thinking about how to have the most visible presence,” said Jennessa Agnew, the group’s field director. “That includes thinking about where the places are where people are congregating in these districts, and how we can ensure congressional staff are seeing this support for bold climate action.”