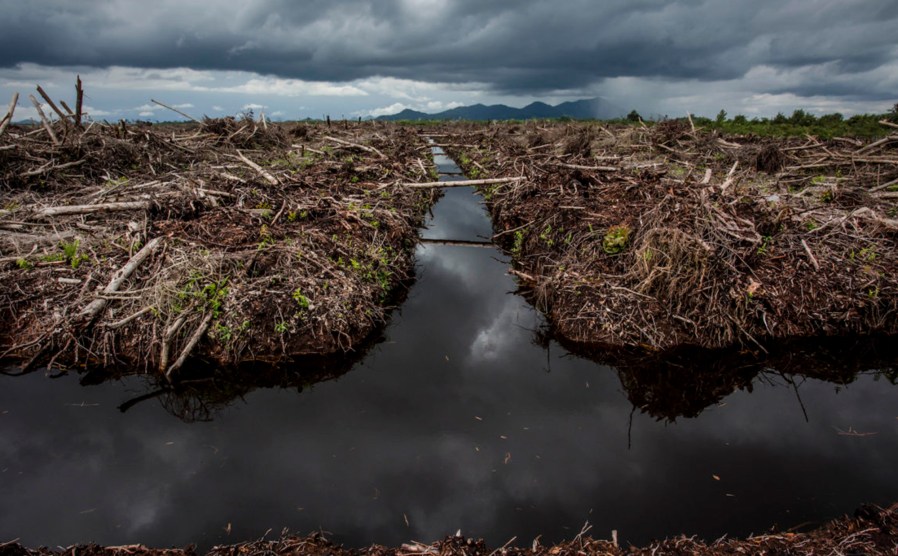 A few weeks ago, the Sri Lankan president announced that his government would ban all imports of palm oil, with immediate effect, and ordered the country’s plantation companies to begin uprooting their oil-palm monocultures and replacing them with more environmentally friendly crops. Citing concerns about soil erosion, water scarcity, and threats to biodiversity and public health, President Gotabaya Rajapaksa explained that his aim was to “make the country free from oil palm plantations and palm oil consumption.”

That’s a pretty radical move, and, as someone who’s spent the past few years writing a book about the global palm oil industry, one I fully support. Worldwide, production of palm oil has skyrocketed in recent decades—oil-palm plantations now cover an area larger than New Zealand—but the boom has meant devastation for the planet.

The oil palm plant, Elaeis guineensis, thrives at 10 degrees to the north and south of the equator, a swath that corresponds with our tropical rainforests. Though they cover just 10 percent of Earth’s land surface, these ecosystems support more than half of all biodiversity.

In Indonesia, the world’s number-one producer of palm oil, habitat loss due largely to industrial agriculture has meant that such iconic species as the Sumatran elephant, orangutan, rhinoceros, and tiger—in addition to various species of hornbill—have been pushed to the brink of extinction. Indigenous peoples who for generations have sourced their food, building materials, and everything else from the archipelago’s forests and rivers have been reduced to eking out existences under donated plastic tarps and begging by the side of the road.

Tropical rainforests are also, of course, vital carbon sinks, and many of them sit upon great expanses of peatlands—soils formed over thousands of years through the accumulation of organic matter. Indonesia claims the planet’s largest concentration of tropical peatlands, and when its palm oil companies drain and burn that land as a precursor to planting, unimaginable quantities of carbon dioxide escape into the atmosphere. The country’s peatlands currently emit more carbon dioxide each year than does the state of California.

Native to West and Central Africa, where it has long been a pillar of local cuisine and culture, palm oil emerged as a global commodity in the 18th century, when Europeans began sourcing it as a fuel for lighting lamps. It eventually found its way into soaps, candles, and margarines, and served as a lubricant for the machines driving the Second Industrial Revolution. Around the turn of the 20th century, rubber planters in Malaya and the Dutch East Indies began introducing the crop in that part of the world, and the post-independence governments of Indonesia and Malaysia expanded oil-palm acreage in connection with poverty-alleviation schemes. Having eventually learned to refine, bleach, and deodorize the oil into something all but tasteless, odorless, and invisible, the industry proceeded to find ever-more uses for it. These days, palm oil accounts for one-third of total global vegetable oil consumption, and some derivative of the plant lurks in roughly half of all products in US grocery stores, from shampoos and lipsticks to non-dairy creamers and doughnuts.

India, now the world’s number-one importer of the oil, went from buying 30,000 metric tons in 1992 to 8.4 million in 2020. China saw an increase from 800,000 metric tons to 6.8 million over the same period. Here in the United States, imports have risen steadily since the mid-2000s, in part as a result of the Food and Drug Administration’s warnings about trans fats. Semi-solid at room temperature, palm oil, which has no trans fats, proved an ideal replacement for the partially hydrogenated oils that processed-foods manufacturers had previously used to enhance the texture and extend the shelf life of their cookies and crackers. At around the same time, government biofuels mandates in the United States saw more domestic corn and soy oil being diverted to cars, leaving a vacuum increasingly filled by palm—and spurring producer countries to amp up the supply.

Trade liberalization and economic growth in middle-income countries over the last two decades have led to a surge of palm oil flowing across international borders, where it has enabled the production of ever-greater amounts of deep-fried snacks and ultra-processed foods. (Though we often look to sugar as the culprit for the world’s weight woes, refined vegetable oils have added far more calories to the global diet in the last half-century than any other food group.) Rates of obesity, diabetes, and heart disease are soaring in the poorer countries where the multinational companies that peddle such junk are focused on growing their markets.

Though many of the companies that produce, trade, and source palm oil have signed zero-deforestation commitments and otherwise pledged to protect the environment and human rights (palm oil production has been linked repeatedly to land-grabbing and labor abuses), oil palm fruit grown illegally on peatlands and other protected areas routinely makes its way into our kitchens and bathrooms. Nor has the Kuala Lumpur–based watchdog group known as the Roundtable on Sustainable Palm Oil, or RSPO, succeeded in reining in the industry.

But that doesn’t mean that Westerners are off the hook: Last week, a Washington, DC–based think tank published a report finding that international markets for commodities like palm oil are by far the most important driver of global deforestation, the majority of which happens illegally. In Indonesia, the researchers found, at least 81 percent of forested land cleared to produce palm oil was done so in violation of the law. While consumers and activists aligned with such groups as the Rainforest Action Network and Greenpeace have done their part to force concessions from the industry, without genuine buy-in from Western governments and consumer-facing corporations, activist campaigns will only get so far.

The WHO compared the tactics of palm oil producers to those of the tobacco and alcohol lobbies.

Now there may be reason for hope. A few weeks ago, during President Biden’s climate summit, a group including the US, Britain, and Norway—along with such companies as Amazon, Airbnb, Unilever, and Nestlé—introduced an ambitious initiative called Lowering Emissions by Accelerating Forest finance, or LEAF, aimed at creating an international marketplace in which carbon credits can be sold in exchange for avoiding deforestation. The scheme, which kicks off with a pledge of $1 billion, is meant to improve upon the program known as REDD+ (Reducing Emissions from Deforestation and forest Degradation), the United Nations initiative introduced in 2008, by working with larger units of land, thereby avoiding deforestation simply being displaced to other forest patches. Its proponents believe that by offering a consistent, long-term source of demand for developing countries that effectively protects their tropical forests, the LEAF marketplace will make forests more valuable to those countries—and their often-corrupt leaders—than if they are cut down to grow agricultural commodities like palm oil.

In other good news, Senator Brian Schatz, Democrat from Hawaii, recently announced plans to introduce legislation that would put in place import requirements for agricultural commodities associated with illegal deforestation. “I don’t think the average consumer knows that half the stuff they buy at the supermarket contains palm oil,” Schatz said, “and most of palm oil is from illegally deforested land.”

Modeled on the 1900 Lacey Act, which banned trafficking in illegal wildlife (it was amended in 2008 to include plant and plant products such as timber and paper), the bill would oblige companies bringing commodities like palm oil into the U.S. to know where the goods originated and to ensure they were produced in compliance with the laws of the country in which they were grown. The bill would also make it possible for U.S. courts to prosecute companies laundering illegally sourced products and would provide aid to countries that commit to eliminating illegal deforestation. Britain and the European Union are in the process of developing similar regulatory measures to reduce the negative impacts of their trade in agricultural commodities.

Big Palm Oil will undoubtedly push back—in 2019, the World Health Organization compared the tactics used by the $65 billion industry to those employed by the tobacco and alcohol lobbies—but if there were ever a time for governments to stand their ground, now is that time. Last week, the International Energy Administration reported that to have any chance of meeting the temperature target set in the Paris accord, investment in fossil fuel supply projects has to cease immediately. We also need to slam the brakes on tropical deforestation. Ripping out an entire nation’s oil-palm acreage, as Sri Lanka is doing, may not be the most practical way to solve our intertwined climate, biodiversity, and health crises, but it’s a step in the right direction.