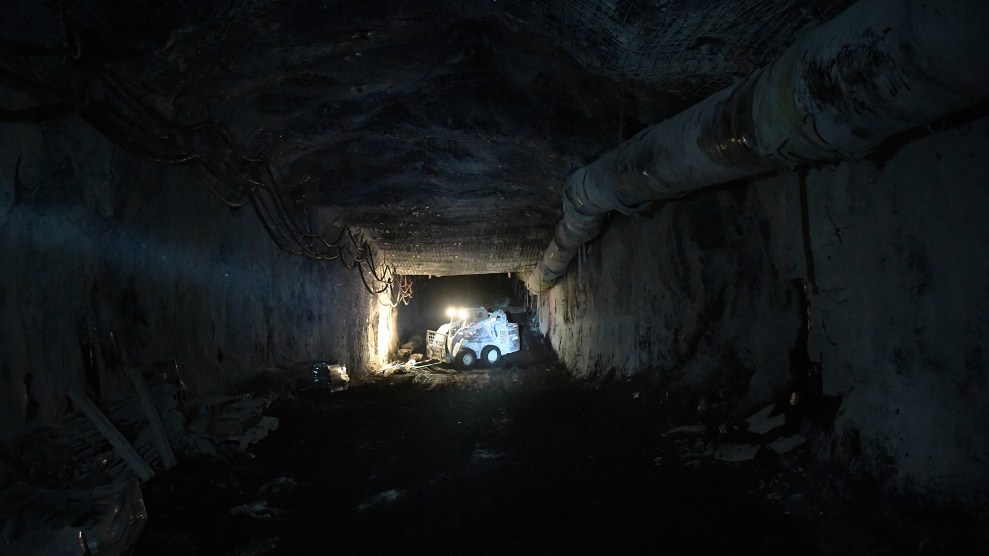 This article was originally published by HuffPost and is reproduced here as part of the Climate Desk collaboration.

One week after being sworn in, President Joe Biden signed a sweeping executive order aimed at “tackling the climate crisis at home and abroad.” It included seemingly clear language about ending subsidies for the industry most responsible for planetary warming.

“The heads of agencies shall identify for the Director of the Office of Management and Budget and the National Climate Advisor any fossil fuel subsidies provided by their respective agencies, and then take steps to ensure that, to the extent consistent with applicable law, Federal funding is not directly subsidizing fossil fuels,” the order reads.

The order also directed the secretary of the interior to “consider whether to adjust royalties associated with coal, oil, and gas resources extracted from public lands and offshore waters, or take other appropriate action, to account for corresponding climate costs.”

No one anticipated that would mean reducing the fees drilling and mining companies pay to extract fossil fuels from federal lands.

“A royalty reduction like this is essentially a subsidy…They clearly do not need this relief.”

The St. Louis, Missouri-based company made its request for relief last year when the Trump administration was in office, and the Bureau of Land Management approved it in May. Arch Resources, formerly Arch Coal, is the second largest coal supplier in the country. It is also a former client of Interior Deputy Secretary Tommy Beaudreau, though the rate reduction was approved before Beaudreau’s confirmation.

Mark Squillace, a professor of natural resources law at the University of Colorado Boulder, called the approval “outrageous” and said he’d like to believe it was some kind of mistake.

“A royalty reduction like this is essentially a subsidy,” he said. “Somebody’s asleep at the switch here.”

Squillace noted that Arch reported a net income of $27.9 million in the second quarter of this year, when the cuts were approved. “They clearly do not need this relief,” he said.

The administration has promised aggressive action to rein in planet-warming greenhouse gas emissions. Its explanation of the Arch royalty cuts is as perplexing as the decision itself.

“The royalty relief process allows the BLM to provide temporary relief for mines to determine if they may remain viable,” a spokesperson for Interior’s Bureau of Land Management told HuffPost by email. The breaks for Arch mines allow “for time to see if potential technological advances, such as methane capture, will work,” the spokesperson said. “Additionally, the reduced rate allows for the recovery of ore that would not otherwise be economic, and thus encourages the greatest ultimate recovery.”

BLM did not respond to several of HuffPost’s specific questions, including how the decision squares with the administration’s climate goals. The White House, which this week told the New York Times that the administration “has been very clear about marshaling an all-of-government approach that makes climate change a critical piece of our domestic, national security and foreign policy,” did not answer questions and referred HuffPost to the Interior Department. Arch Resources did not respond to a request for comment.

The Interior Department has no obligation to grant companies’ requests for royalty relief. As for promoting the “greatest economic recovery,” Squillace noted that “this argument could be used to justify eliminating royalty payments entirely.”

“Denying this request would have been a better decision both from the perspective of economics and the environment.”

“How is this reduction going to impact state and federal revenues and how does this decision impact the administration’s climate policies?” he asked. “Just as the Secretary has the discretion to reduce royalties she has the discretion to refuse to reduce these royalties and I have little doubt that denying this request would have been a better decision both from the perspective of economics and the environment.”

In a March letter, the Sierra Club and several other environmental groups urged the director of BLM’s Colorado office to deny Arch’s request for royalty relief at the West Elk mine.

“Subsidizing coal mines through ongoing royalty relief directly contributes to the climate crisis, contradicting this administration’s policy,” the organizations wrote at the time.

Biden has come under fire from some of the same climate and environmental groups that largely applauded his early efforts. His administration has worked to uphold a number of Trump-era energy projects, including the previous administration’s decision to approve ConocoPhillips’ massive Willow Project in Alaska’s National Petroleum Reserve last year. The $6 billion project, which is slated to produce 590 million barrels of oil over 30 years, has been a major priority of Alaska’s Republican delegation.

On the campaign trail, Biden vowed to “transition away from the oil industry.” And the Interior Department is in the process of reviewing the federal oil and gas leasing program. Yet permits to drill for oil and gas on public lands have increased under Biden’s watch.