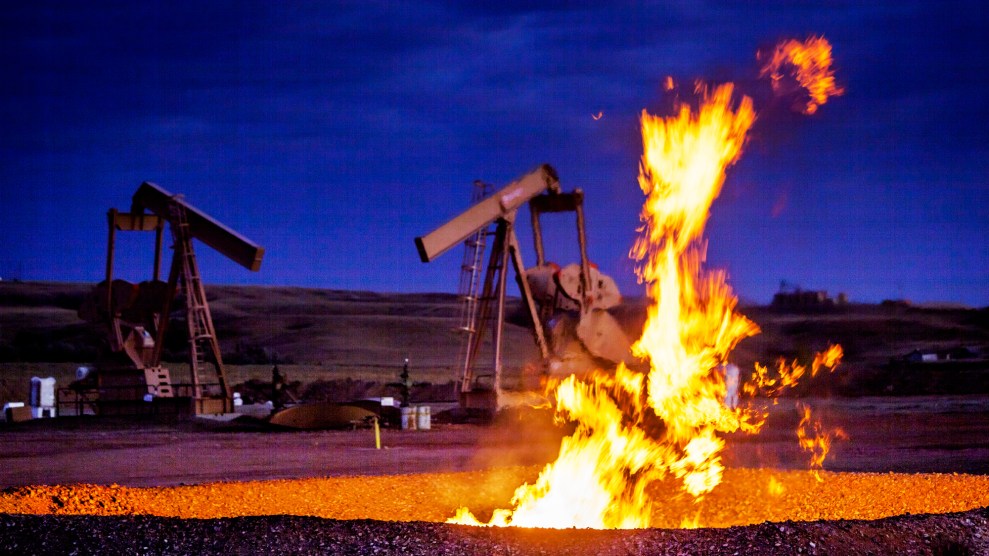 Flames from a flaring pit near a well in the Bakken Oil Field. The primary component of natural gas is methane, which is odorless when it comes directly out of the gas well. Orjan F. Ellingvag/Corbis via Getty Images

Last Monday, the United Nations’ Intergovernmental Panel on Climate Change dropped a landmark report on the state of the planet which—spoiler alert—ain’t looking great. The arch villain of the assessment is carbon dioxide, but it also called out CO2’s less-famous sibling: methane. Atmospheric concentrations of this greenhouse gas, which is 80 times more potent than CO2, are now higher than any time in at least 800,000 years, the report notes. If humanity could get serious about slashing methane emissions, that would put a huge and rapid brake on climate change.

“Methane is the next crucial, fast, climate-stabilization prize,” said Rick Duke, senior director and White House liaison for the Special Presidential Envoy for Climate Change, at a press conference on Monday following the release of the report. “There’s simply nothing that comes close for securing our near-term climate future, buying us crucial time to decarbonize energy and to develop advanced options like negative-emissions technologies.”

“Cutting methane emissions is the single fastest, most effective way there is to slow the rate of warming right now,” agreed Ilissa Ocko, senior climate scientist at the Environmental Defense Fund.

Like carbon dioxide, methane contains carbon; its chemical formula is CH4. It’s a principal component of natural gas and of many ecosystems. Rotting vegetation produces methane—wetlands are particularly high emitters. And when insects like termites and ungulates like cows digest food, they also make methane. (It’s mostly cow burps, not farts, that contain the gas.)

But while CH4 is a perfectly natural component of Earth’s atmosphere, the amount that’s now been added to the skies is far from natural. One big factor is livestock breeding, including not just cows but also sheep and pigs—all that manure adds more methane. In the US, this “enteric fermentation” is responsible for over a quarter of domestic methane emissions. The production and transportation of natural gas, coal, and oil make up another 30 percent and landfills—which are full of decomposing vegetation, after all—add 17 percent.

When determining how potent a greenhouse gas is, there are two main considerations: How efficient the molecule is at trapping heat, and how long it can survive in the atmosphere. Greenhouse gases like CO2 and CH4 are both very effective at containing heat; they are actually what help make Earth habitable by preventing warmth from escaping into space. But methane is better at it. “You have a carbon attached to two oxygen atoms in a CO2 molecule, but a carbon attached to four hydrogen atoms in a methane molecule,” says NYU environmental scientist Matthew Hayek, who studies methane. “And so there are more ways that the bonds between those atoms can vibrate when it receives, or absorbs, infrared radiation, and hence re-emits infrared radiation.”

“A pound of methane being emitted can trap heat over 100 times more than CO2 when it’s first emitted,” agrees Tianyi Sun, a climate scientist at the Environmental Defense Fund who specializes in methane. But, she points out, methane vanishes faster. “It only lasts in the atmosphere for about a decade, and it’s gone.” Carbon dioxide, by contrast, can last centuries.

Before humans started producing too much of each, when these gases occurred naturally, they would float into the atmosphere, absorb radiation, and decompose through oxidation over their different timescales. So a volcano might eject CO2 into the atmosphere, and wetlands would slowly seethe methane, but both would eventually dissipate. The atmosphere was able to exist in an equilibrium, creating a sort of blanket that kept the planet warm but not too hot.

Thanks to runaway emissions, humanity has thickened that blanket: Methane is now responsible for about a quarter of global warming. But its relatively quick breakdown time makes it an enticing target for attacking climate change. “Because it doesn’t last very long in the atmosphere, once we start reducing the emissions, you can really see the atmospheric concentration goes down,” says Sun. “And that is very different from carbon dioxide.”

Sun recently quantified the potential effect in a paper published in the journal Environmental Research Letters. Using existing technologies—for instance, capturing CH4 emitted from oil and gas production, and better managing agricultural manure—she estimated that humanity could halve its methane emissions by the year 2030. “It would avoid about a quarter degree C of warming by mid-century, and about half a degree of warming by the end of this century,” says Sun. “And it can also slow down the rate of warming in the near term by about 30 percent. And that is very significant when we’re thinking about trying to keep warming below 2 degrees C.”

Measures like diligently monitoring natural gas operations for leaks are relatively easy to do, and some of them would come with no net costs, Sun adds, “which means we don’t have to spend additional money to reduce about a quarter of methane emissions in the next few years. And that’s huge.” (As more fake burgers and protein alternatives whittle away at the market share of meat, that might help bring down methane emissions, too. Scientists have also been experimenting with modifying feed to make livestock less burpy.)

But pinpointing where CH4 is coming from isn’t always as easy as spotting a leaking pipeline, because so many of its sources are biological. After all, the planet emits methane by default. And even if you focused your search for emissions on human-created sources like cattle ranches, it would be hard to tell which ones are the biggest polluters, because it doesn’t necessarily correspond with their size. Animals’ gut biomes are unique, and produce gas differently, so it’s hard to know which cattle are the burpiest. It’s much easier to sense and calculate the emissions from an industrial process; if you know the volume of oil you are burning, for instance, you know how much CO2 it will give off.

Scientists use two methods to quantify methane emissions, says Hayek: bottom-up and top-down. It’s important to do both, because each has its own shortcomings. A bottom-up method would count pigs, for instance, and use a model to estimate how much methane the average pig (and its waste) emits per day, then use that data to create an inventory of estimated emissions. (A similar method was just used by researchers who wanted to calculate the carbon cost of feral pigs rooting up soil and releasing CO2.) “Of course, you have lots of uncertainties in that inventory,” says Hayek. No two pigs are alike, after all.

So scientists would also want to do a top-down estimate, measuring atmospheric methane and using models to determine where that gas came from. Say you want to locate the source of methane in a specific area of the Midwest; to the east are some pig farms, and to the west are some oil fields. If you had wind data and sensors measuring how much methane is in the air, “then you know that on the day that the wind is blowing from the east, that was animal methane,” says Hayek. “And on the day it was from the west, that was oil and gas methane.”

Taking methane inventories like this is crucial for setting environmental standards for oil and gas companies, which the Trump administration weakened and the Biden administration is trying to restore. Quantifying emissions sources can help inform social and policy questions, says Hayek: “Do we want to stop drilling for oil and gas? Do we want to stop eating beef? Or do you want to regulate oil and gas and beef to be a little less methane-emissive?”

The end game, of course, is even more dramatic: Dispense with fossil fuels altogether, replacing them with renewable energy. And while that is a longer, slower process, Sun says we have an “unparalleled opportunity” to immediately slam the brakes on methane.

“Dealing with methane emissions is something we can do right now,” she says, “and we already know how to do it.”