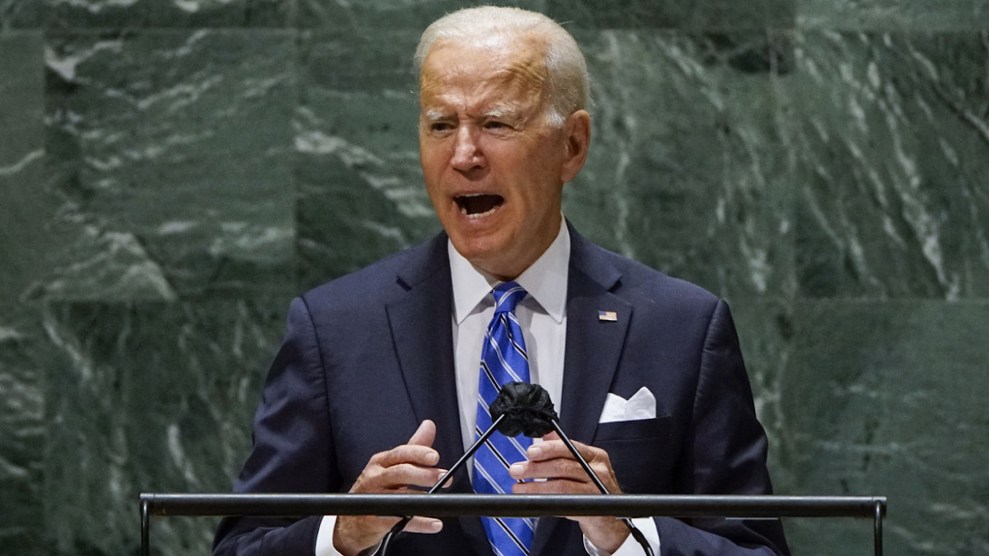 US President Joe Biden addresses the 76th Session of the UN General Assembly in New York on September 21, 2021.Eduardo Munoz/AFP/Getty

President Joe Biden vowed Tuesday to double US spending on international climate aid to $11.4 billion per year by 2024, a move that would significantly expand the pot of money available for poorer countries to develop clean energy and adapt to the already brutal effects of warming.

The pledge, announced during the first-year president’s debut speech before the United Nations, comes almost exactly six months after Biden doubled the previous US commitment to $5.6 billion.

The decision showed a clean break from former President Donald Trump, who withdrew the US from the global pact to cut carbon emissions and canceled all payments to the world’s main climate aid fund. Trump’s predecessor, former President Barack Obama, had pledged $3 billion to the fund, but paid out just $1 billion before his Republican successor took office.

“We’ll work with the Congress to double that number again, including for adaptation efforts,” Biden said before the United Nations General Assembly in Manhattan. “This will make the United States a leader in public climate finance.”

Yet even the quadrupled annual figure falls far short of what US allies are contributing, and represents roughly one-eighth of what the world’s largest historical emitter would need to pay to account for its cumulative share of carbon heating the planet.

America’s “fair share” of climate costs would be a huge number. Then again, it spent $714 billion on its military in 2020.

The US has spewed the second-most carbon into the atmosphere each year since 2006, when China, with its ravenous appetite for coal, took the top slot. But Americans’ love of gas guzzlers, big suburban houses, and cheap plastic goods makes the U.S. the largest per capita emitter by far. Carbon dioxide remains in the atmosphere for over a century, preventing the sun’s heat from escaping back into space and heating the planet all the while, meaning the US’s nearly 200 years of industrial pollution make up the lion’s share of the emissions causing climate change today.

Accounting for that reality, the US would need to spend $800 billion on climate aid to the rest of the world by 2030, according to an analysis put forward earlier this year by a diverse coalition of more than 1,300 civil society groups. That’s close to $89 billion per year, nearly eight times what Biden pledged Tuesday.

The new proposal even fails to match more conservative estimates of what the US owes the rest of the world. The U.S. fell dead last on a list of countries that compared total historical emissions to existing climate finance pledges. The ranking from the Overseas Development Institute, a London-based think tank, calculated that the US should have donated a little over $43 billion between 2017 and 2018.

Tuesday’s pledge is even shy of the $12 billion per year an alliance of US nonprofits, including the Natural Resources Defense Council and Oxfam America, proposed this week.

“This was a very significant ramp up, however it’s definitely not the US’s fair share,” Rachel Cleetus, the climate policy director at the nonprofit Union of Concerned Scientists, said by phone Tuesday after the president’s speech. “More will need to be done in the years ahead.”

The rich world promised more than a decade ago to muster $100 billion per year to help countries in Africa, Asia, and Latin America skip the fossil fuel phase of economic development and fortify themselves against the droughts, flooding, and extreme weather already disproportionately afflicting them.

Yet by 2019, the North American and European nations that grew wealthy burning fossil fuels and chopping down forests over the past two centuries contributed just $79.6 billion to the fund, more than $20 billion less than was promised, the Organization for Economic Cooperation and Development, a club of rich countries, found in a report published last week.

The European Union and its members already give developing countries about $25 billion per year, and the European Commission vowed this month to increase that by nearly $4.7 billion.

“My message today is that Europe is ready to do more,” European Commission President Ursula von der Leyen said in her State of the European Union speech last Wednesday. “But we expect the United States and our partners to step up too.”

A truly “fair share” spending figure from the US would amount to an eye-popping number. But the US spent $714 billion on its military in 2020 alone, despite repeated warnings that the Pentagon does too little to root out profligate spending and graft by private contractors, going as far as to hide an internal study that estimated wasteful bureaucratic costs at $125 billion.

For comparison, the cost of building a single US aircraft carrier this year will likely exceed what Biden has proposed to help other countries deal with climate change by more than $1 billion.

Helping other nations cut emissions and avoid upheaval should decrease the likelihood of armed conflict.

Military spending is often contrasted with policy issues the US badly needs to fund but fails to prioritize, such as basic infrastructure, education, or health care. But the comparison is uniquely relevant with climate change. Already, increasingly scarce freshwater supplies are stoking regional tensions. Some researchers connect the civil war in Syria, which created a refugee crisis that served to destabilize Europe and neighboring countries, to a prolonged drought that drove more than a million rural workers from the countryside to cities as crops failed. Twelve of the 20 countries deemed most vulnerable to warming impacts are mired in conflict, and studies indicate that number will likely grow as average temperatures rise.

The Pentagon, even under Trump, indicated that extreme weather and less predictable resources pose an almost certain risk of more wars, terrorism, and the very violence a well-armed military is supposed to guard the American population against. Helping other countries cut their emissions and avoid social and ecological upheaval should decrease the likelihood of armed conflict.

“The ambitious call we’re making actually makes sense when you look at it juxtaposed to what we spend on the military,” said the Rev. Michael Malcom, an ordained minister and the executive director of The People’s Justice Council, a grassroots climate justice group. “If we would take away from our death-dealing devices and invest in life-giving measures, we can make it happen.”

Yet Biden will need Congress to authorize the $11.4 billion per year in aid funding at a time when members of the president’s own party say they are reluctant to approve a politically popular $4 trillion budget aimed at building infrastructure and hastening the transition to clean energy and electric vehicles.

Despite the White House’s request to keep the Pentagon budget flat at $715 billion, congressional Democrats voted with Republicans this month to increase the military’s spending by $24 billion.