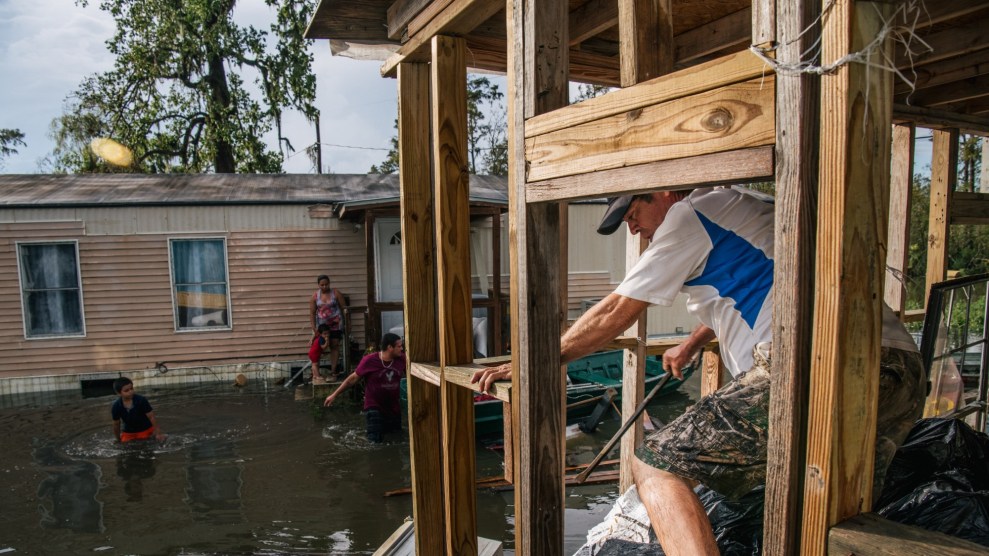 Family walk up steps to their home after it was flooded during Hurricane Ida.Brandon Bell/Getty

Hurricane Ida has battered one of the poorest regions of the country, driving floodwaters into neighborhoods along the Gulf Coast and those along the Mississippi River in Louisiana. Its winds knocked trees through houses, and its rising waters sent people into their attics where they waited for rescue. Thousands will likely be without shelter for weeks or even months.

A move by the Supreme Court last Thursday could make the struggle to find housing even worse.

Despite a push from community organizations and members of Congress, the conservative court blocked the Centers for Disease Control and Prevention from enforcing a federal moratorium on evicting renters during the pandemic. In the South, the fight by housing advocates to maintain the eviction ban was undergirded by the knowledge that the states most likely to see evictions were those set to be hit by Hurricane Ida, a storm likely intensified by climate change.

“Climate change is also a housing crisis,” said Andreanecia Morris, executive director of the housing advocacy nonprofit HousingNOLA. “Mother Nature is trying to evict us with cause.”

While natural disasters may uproot families and their homes, landlords have used hurricanes, floods, and other wild weather events as an opportunity to kick renters out. After Hurricane Katrina, thousands of low-income renters in Louisiana and Mississippi faced mass evictions and illegal price gouging. In New Orleans, homelessness rates soared in the following years, as people flocked to the city and helped drive average rental prices up 82 percent.

According to the most recent Census Bureau survey, as a result of the coronavirus pandemic, 6 percent of renters nationwide say they are “likely” or “very likely” to face eviction. In Louisiana, the number is almost 1 in 5. In Mississippi, one of every 10 renters say they are at risk of eviction. Even before the pandemic, more than a third of renters in both states were low-income and facing the constant threat of eviction, according to tabulations of the 2019 American Community Survey by the National Low Income Housing Coalition.

Hours after the Supreme Court’s ruling on Thursday, families across the state of Mississippi were given eviction orders through local court systems. This came three days before Hurricane Ida knocked out power and water systems for more than 1 million people across Louisiana and Mississippi.

“We see this after every disaster,” said Sarah Saadian, vice president of public policy at the National Low Income Housing Coalition. “This power imbalance that exists between renters and landlords allows them to turn tragedies into money in their pockets.”

Saadian says the Supreme Court’s ruling will give landlords a freer hand to evict tenants under the guise of remodeling and rebuilding battered homes and apartments. A loss of housing supply could also allow them to drive up their rents.

“All of a sudden, after disasters, there’s less housing supply because a lot of homes are destroyed, but then there are also more people displaced from their homes for socially constructed reasons—and both groups need to find housing,” Saadian said. “So that usually creates a cycle where landlords raise their prices and oftentimes continue evicting people, even if there’s no damage to their property, so they can make more money.”

“I think we’re going to see a spike in homelessness as a direct result of informal evictions.”

While resources for homeowners are typically made available following disasters through the Federal Emergency Management Agency, renters are offered much less protection. In the aftermath of storms, particularly in states with some of the weakest protections for renters like Mississippi and Louisiana, landlords sometimes manage to evict tenants without going through proper legal proceedings.

Morris believes that while legislative attention will be focused on stopping legal evictions in the wake of Hurricane Ida, these illegal evictions will go under the radar. “I think we’re going to see a spike in homelessness as a direct result of informal evictions,” she said, “not the destruction caused by the storm.”

The timing of the storm, however, may have left people especially vulnerable. “With this storm coming at the end of the month, we have people either waiting to receive their next paycheck or people who’ve just used their money to pay rent,” Saadian said. “That means many people just didn’t have the resources to evacuate or be in a hotel for a couple of nights.”

In the meantime, as the results of Ida’s destruction come to light, housing advocacy groups will continue to call for more robust protections for renters. The housing crisis, compounded by the pandemic and natural disasters, deserves a more coordinated response, they say.

“We shouldn’t have a disaster response system that depends on whether or not you have money in your bank account,” Saadian said.