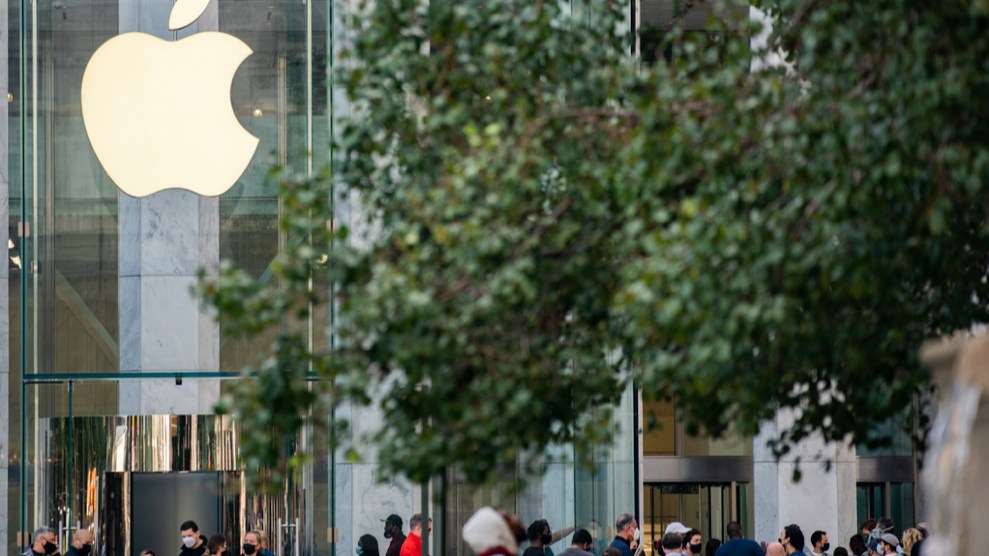 Some of America’s most prominent companies, including Apple, Amazon, Microsoft, and Disney, are backing business groups that are fighting landmark climate legislation, despite their own promises to combat the climate crisis, a new analysis has found.

A clutch of corporate lobby groups and organizations have mobilized to oppose the proposed $3.5 trillion budget bill put forward by Democrats, which contains unprecedented measures to drive down planet-heating gases. The reconciliation bill has been called the “the most significant climate action in our country’s history” by Chuck Schumer, the Democratic leader in the US Senate.

Most large US corporations have expressed concern over the climate crisis or announced their own goals to cut greenhouse gases. Jeff Bezos, one of the world’s richest people, has said that the climate crisis is the “biggest threat to our planet” and the company he founded, Amazon, has created a pledge for businesses to cut their emissions to net zero by 2040. Microsoft has promised to be “carbon negative” within a decade from now and Disney is aiming to use only renewable-sourced electricity within the same timeframe.

But these leading companies, and others, either support or actively steer the very lobby groups that are attempting to sink the bill that carries the weight of Joe Biden’s ambitions to tackle the climate crisis, threatening one of the last major legislative efforts that will help decide whether parts of the world plunge into a new, barely livable climatic state.

“Hiding behind these shady groups…puts these companies’ household names and reputations in serious jeopardy.”

“Major corporations love to tell us how committed they are to addressing the climate crisis and building a sustainable future, but behind closed doors, they are funding the very industry trade groups that are fighting tooth and nail to stop the biggest climate change bill ever,” said Kyle Herrig, president of watchdog group Accountable.US, which compiled the analysis.

None of the companies contacted by the Guardian would rebuke the stance of the lobby groups they are part of and none said they would review their links to these groups.

The US Chamber of Commerce has vowed to “do everything we can to prevent this tax raising, job killing reconciliation bill from becoming law”. The leading business lobby group’s board includes executives from companies including Microsoft, Intuit, United Airlines and Deloitte, which have all expressed concern over climate change – Deloitte even includes teaching the climate crisis to employees in its staff training – and have made various promises to reduce emissions.

Another group, the Business Roundtable, has said it is “deeply concerned” about the passage of the bill, largely because it raises taxes on the wealthy. The organization is made up of company chief executives, including Apple’s Tim Cook, who has called for stronger action on the climate emergency from governments and businesses. Other members include Andy Jassy, chief executive of Amazon, Sundar Pichai, who heads Google’s parent company Alphabet, and Darren Woods, chief executive of the oil giant ExxonMobil.

The National Association of Manufacturers—backed by Johnson & Johnson, Dow, and Goodyear—hopes to upend the bill “in every way you can imagine.”

The Pharmaceutical Research and Manufacturers of America, a trade group that includes Bayer and AstraZeneca among its members, has run adverts attacking the proposed bill. The Rate Coalition, another lobby group that has Disney, FedEx and Verizon as members, is also planning an advertising blitz to help kill off the legislation while the National Association of Manufacturers—backed by Johnson & Johnson, Dow, and Goodyear—has said it is attempting to upend the bill “in every way you can imagine.”

This blitz threatens legislation that already faces a perilous path through Congress, with the president needing every Senate Democrat to vote for the package for it to pass. Joe Manchin, the centrist Democrat from West Virginia who is a major recipient of donations from the fossil fuel industry, has said the climate section of the bill “makes no sense” and has demanded that subsidies for coal, oil and gas remain in place. Republicans universally oppose the bill.

If enacted, the bill would establish a system to phase out emissions from the US electricity system, provide payments to prop up carbon-free nuclear energy and support the adoption of electric vehicles.

As the first major attempt at climate legislation in more than a decade, the bill comes at a time when scientists warn the world is rapidly running out of time to avoid catastrophic climate change. The legislation’s failure would not only wound Biden politically, it would also likely hinder attempts to prod other countries into more drastic action at crucial upcoming UN climate talks in Scotland.

“This is a historic chance to end fossil fuel subsidies and invest in a livable future,” said Lukas Ross, climate program manager at Friends of the Earth. “We can’t waste this opportunity to pass meaningful climate legislation because there might not be another.”