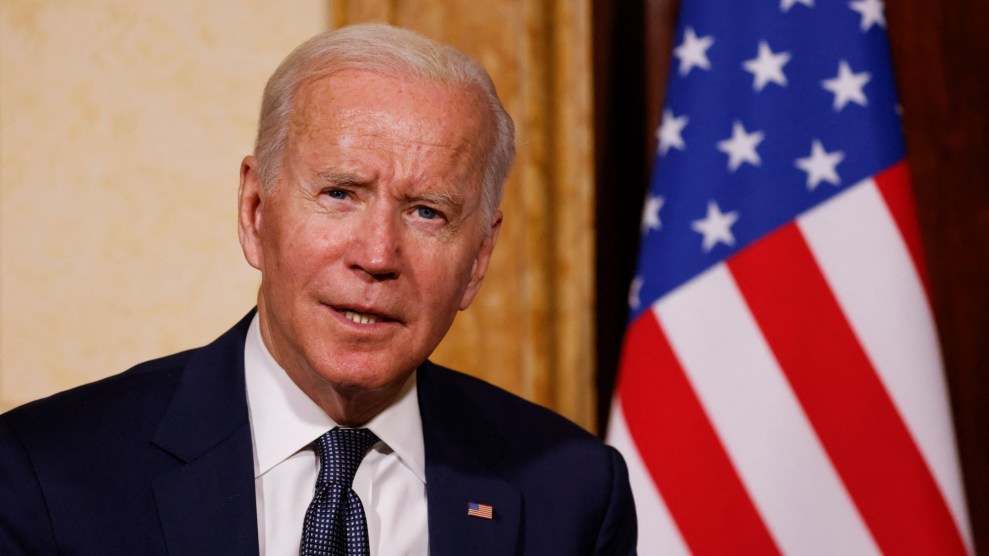 With no major climate legislation firmly in hand and international allies still smarting after four bruising years of Donald Trump, Joe Biden faces a major challenge to reassert American credibility as he heads to crucial UN climate talks in Scotland.

The US president, who has vowed to tackle a climate crisis he has described as an “existential threat” to civilization, will be welcomed to the COP26 talks with a sense of relief following the decisions of his predecessor, who pulled his country out of the landmark Paris climate agreement and derided climate science as “bullshit.”

But Biden, who departed to Europe on Thursday and arrived in Rome on Friday morning for a G20 summit, will head to Glasgow with his domestic climate agenda whittled away by a recalcitrant Congress and a barrage of criticism from climate activists who claim Biden’s actions have yet to match his words.

This disconnect has perturbed delegates keen to see a reliable American partner emerge from the Trump era, amid increasingly dire warnings from scientists that “irreversible” heatwaves, floods, crop failures and other effects are being locked in by governments’ sluggish response to global heating.

“The US is still the world’s largest economy; other nations pay attention to it.”

“The US is still the world’s largest economy, other nations pay attention to it, and we’ve never had a president more committed to climate action,” said Alice Hill, who was a climate adviser to Barack Obama. “But there is skepticism being expressed by other countries. They saw our dramatic flip from Obama to Trump and the worry is we will flip again. A lack of consistency is the issue.”

Laurence Tubiana, a French diplomat who was a key architect of the Paris agreement, said that Biden had put climate “at the top of his agenda” and that US diplomacy has helped eke some progress from countries such as Saudi Arabia, South Africa and India.

But she added the US had a “historical climate credibility problem” and that other leaders fret about its domestic political dysfunction and long-term commitment.

“We do worry, because it has happened before and could happen again,” she said. “The US is the world’s largest historical emitter and never passed a significant climate bill. [Biden] has still got a long way to go to make up for Trump’s lost years.”

In a show of soft American power, Biden is bringing a dozen of his cabinet members to Glasgow, where delegates from nearly 200 countries will wrangle over an agreement aimed at avoiding a disastrous 1.5 degrees Celsius of global heating, a key objective of the Paris deal. But perhaps the most consequential figure to the American effort, rivaling the president himself, is remaining at home—the West Virginia senator Joe Manchin.

Manchin, a centrist Democrat, looms large at the talks having derailed the centerpiece of a landmark reconciliation bill that would slash US emissions. The White House still hopes the bill, which would be the first major climate legislation ever passed in the United States, will help convince other leaders to also increase their efforts in Glasgow to head off climate breakdown.

COP26 delegates are acutely aware of how Biden needs Joe Manchin’s vote to pass his agenda.

COP26 delegates have become acutely aware of how Biden needs the vote of Manchin, who has close ties to the fossil fuel industry, to pass his agenda and help determine the future livability of places far from the West Virginia senator’s home state.

“Bangladeshis probably know more about American politics than the average American does, people know about Joe Manchin,” said Saleemul Haq, director of the International Centre for Climate Change and Development, based in Bangladesh, which faces looming devastation from flooding. “Joe Manchin is in the pocket of the fossil-fuel industry and is trying to cut everything the coal lobby doesn’t want.

“Biden’s agenda is stuck in Congress with his own senators and he hasn’t delivered anything near what the United States should deliver. It’s just words. His actions are woefully inadequate.”

Biden has admitted that “the prestige of the United States is on the line” over the reconciliation bill, according to Democrats who met with the president, but publicly he has remained upbeat. When John Kerry, Biden’s climate envoy, said that the failure to secure the legislation would be like “President Trump pulling out of the Paris agreement, again”, Biden gently rebuked him, saying that Kerry had indulged in “hyperbole”.

“In every single day of this administration we’ve been driving forward a whole of government approach that sets us up to go into this climate conference with an incredible deal of momentum,” said an administration official.

The White House has pointed to the rejoining of the Paris accords, the resurrection of several environmental rules axed by Trump and what it is calling the “largest effort to combat climate change in American history” with the reconciliation bill, which is still set to funnel hundreds of billions of dollars in support for solar and wind energy and electric vehicles.

Progressives argue, however, that the Biden administration has done little to curb the fossil fuel industry, most notably in allowing two controversial oil projects, the Dakota Access pipeline and the Line 3 pipeline, to proceed. Just a week after the end of COP26, the administration will auction off 80m acres of the Gulf of Mexico for oil and gas drilling, an area larger than the United Kingdom.

“The president is doing so much, but he is simply not doing everything he can to deliver climate justice and save lives.”

“The president is doing so much, but he is simply not doing everything he can to deliver climate justice and save lives—and we need him to now,” said Cori Bush, a progressive Democratic congresswoman who has visited the site of the Line 3 construction in Minnesota.

Protests have erupted in front of the White House over this record, with several young climate activists currently staging a hunger strike to demand Biden does more.

“President Biden started very strongly by rejoining the Paris agreement but it’s been a frustrating past few months, things have slowed down,” said Jade Begay, a climate activist who is part of a White House advisory council. “Joe Manchin is holding hostage our survival on planet Earth for his own political career and people are really questioning if Biden will stick to his promises.”

The United States has also declined to set an end date for the coal sector, unlike countries such as the United Kingdom and Germany. This position runs contrary to a key objective of the British government as COP26 hosts, with Alok Sharma, the conference’s president, pledging the talks will help “consign coal to history”.

Asked by the Guardian about the US’s stance on coal, Sharma said progress on the issue has been slow until now but “we want to see what is going to be possible” at the Glasgow summit. “I welcome the fact we now have an administration in the United States that is very focused on taking climate action and supporting the international effort,” he said.

Sharma added: “It is ultimately on world leaders to deliver. It is world leaders who signed up to the Paris agreement and … if I can put it like this, it is on them to collectively deliver at Cop.”