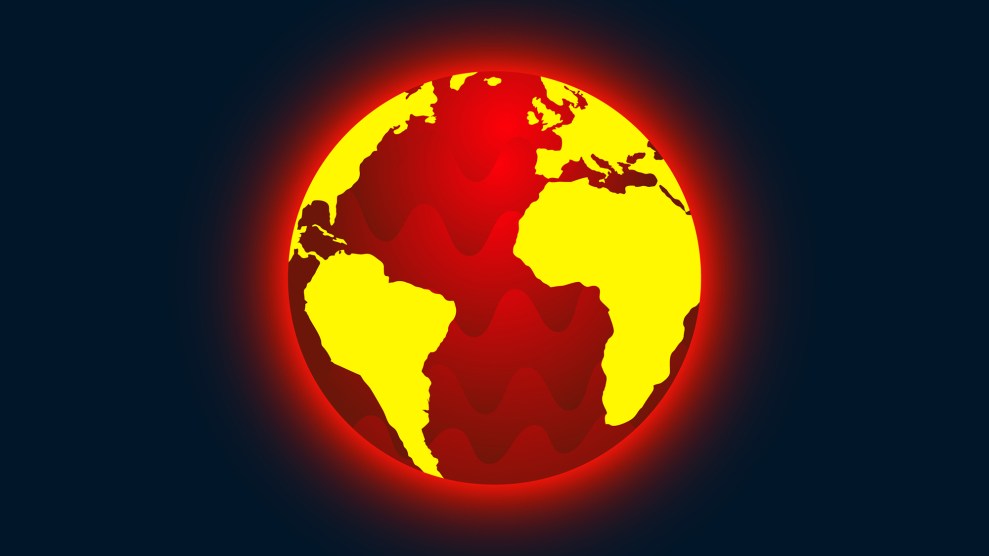 Last year was the sixth hottest ever recorded, with the global temperature 1.1 C above the pre-industrial average, a new annual analysis from NASA and the National Oceanic and Atmospheric Administration (NOAA) found.

“Science leaves no room for doubt: climate change is the existential threat of our time,” said Bill Nelson, administrator of NASA. Nelson said that eight out of the top 10 hottest years have occurred in the past decade, which “underscores the need for bold action to safeguard the future of our country—and all of humanity.”

There were record-high temperatures in parts of northern Africa, south Asia and parts of South America last year, Arctic sea ice continued its decline and the oceans recorded yet another record year for heat content. “The oceans are storing a heck of a lot of heat,” said Russell Vose, a senior climate scientist at NOAA. “If it weren’t for the large heat storage capacity of the oceans, the atmosphere would’ve warmed a lot more rapidly.”

Gavin Schmidt, director of NASA’s Goddard Institute for Space Studies, said the changes under way in the Arctic, which is warming at about three times the rate of the global average, are “extremely dramatic” and will affect the rest of the world through, among other things, sea-level rise from melting glaciers. “What happens in the Arctic doesn’t stay in the Arctic,” he said.

While 2021 did not top the record heat set in 2020, which was only fractionally hotter than 2016, scientists said last year was yet another demonstration of the long-term global heating that is being caused by human activity, such as burning fossil fuels and deforestation. The concentration of carbon dioxide in the atmosphere is now at levels not seen on Earth in the past 4m years.

“It doesn’t matter how you do the analysis, it shows you the Earth has warmed quite dramatically,” said Vose. NOAA and NASA undertake their own temperature analyses in slightly different ways, using data from weather stations, ships and ocean buoys.

“It’s clear that each of the past four decades has been warmer than the one preceding it,” he added. “It’s certainly warmer now than at any time in the past 2,000 years, and probably longer.”

Earlier this week, the European climate agency Copernicus said 2021 was the fifth hottest year on record, with the last seven years the hottest ever documented. A slight edge was taken off last year’s temperatures by a La Niña, a periodic climatic event that cools the waters of the Pacific Ocean.

Despite not being the hottest individual year on record, 2021 did contain a number of extraordinary signs of climate breakdown. July last year was the world’s hottest month ever recorded, with Death Valley in California recording what may be the hottest temperature ever reliably measured during this month, at 54.4 C (130 F).

A total of 1.8 billion people, approaching a quarter of the world’s population, live in countries that did experience the hottest year on record, according to a separate analysis released on Thursday by Berkeley Earth. A total of 25 countries, including China, Nigeria and Iran, recorded a record warm annual average in 2021.

“No one lives at the global average temperature,” said Robert Rohde, lead scientist at Berkeley Earth. “Most land areas will experience more warming than the global average, and countries must plan their responses to this.”

Last year also saw a cascade of disasters that scientists have determined were worsened by the world’s excess heat. Floods devastated parts of Germany and China, while the Pacific north-west of North America saw an unprecedented, and deadly, heatwave that scientists said would have ben “virtually impossible” without climate change.

“What terrifies me … is that these facts and figures are no longer surprising or shocking.”

“What terrifies me … is that these facts and figures are no longer surprising or shocking,” said Kristina Dahl, a senior climate scientist at the Union of Concerned Scientists. “Rising temperatures are already triggering dire impacts worldwide, and will only worsen as the planet warms.”

The world’s governments agreed in the Paris climate accords to limit the global temperature rise to 1.5C above pre-industrial times to avoid disastrous climate change but this threshold is now in view, Vose said, with a 50% chance at least one year this decade will hit 1.5C and the average temperature to reach this level “sometime in the 2030s and certainly by the 2040s” if planet-heating emissions are not cut.

2022 will probably be in the top 10 hottest years, with a small chance of it being the hottest year on record “without something like a volcano erupting or a comet slamming into Earth,” Vose said.

Schmidt said the impact of global heating will continue to worsen as the world warms further. “We are already seeing the impacts in local weather events and extremes such as heatwaves and intense precipitation,” he said.

“We’ve reached a point where this is not just an academic measure of what’s going on. It’s now being reflected in weather and events we are seeing.”