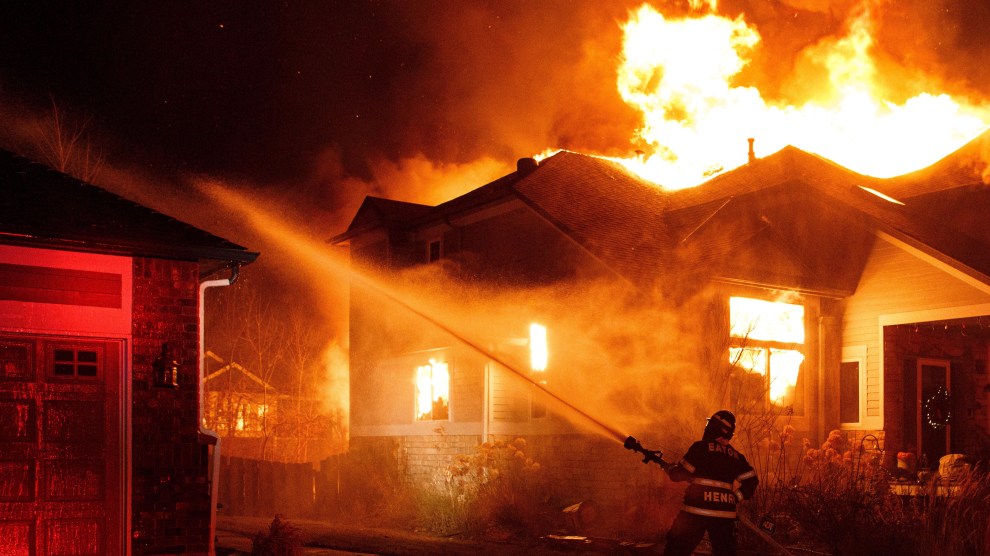 A wildfire in Louisville, Colorado, in December 2021Jeremy Sparig/Colorado Sun/Zuma

Wildfires that have devastated California, Australia and Siberia will become 50% more common by the end of the century, according to a new report that warns of uncontrollable blazes ravaging previously unaffected parts of the planet.
The escalating climate crisis and land-use change are driving a global increase in extreme wildfires, with a 14% increase predicted by 2030 and a 30% increase by 2050, according to a UN report involving more than 50 international researchers.

The findings suggest there should be a radical change in public spending on wildfires. The report said governments were putting their money in the wrong place by focusing on the work of emergency services when preventing fires would be a more effective approach.

Wildfires are becoming an expected part of life on every continent, except Antarctica, destroying the environment, wildlife, human health and infrastructure, according to the report, which was written in collaboration with GRID-Arendal, a non-profit environmental communications centre. The report warned of a “dramatic shift in fire regimes worldwide”.
“From Australia to Canada, the United States to China, across Europe and the Amazon, wildfires are wreaking havoc on the environment, wildlife, human health and infrastructure,” the foreword of the report said, adding that while the situation “is certainly extreme, it is not yet hopeless.”

Although “landscape fires” are essential for some ecosystems to function properly, the report looks specifically at “wildfires”, which it defines as unusual free-burning vegetation fires that pose a risk society, the economy or environment. This month, researchers found global heating could cause “megafires resistant to fire-suppression practices” in southern California. In the US, nearly 3m hectares (7.7m acres) of land were burned by wildfires last year, with blazes becoming increasingly hard to fight.

Direct responses to wildfires receive more than 50% of funding now, while planning and prevention get less than 1%. The paper calls for a “fire-ready formula” with investments rebalanced so half goes on planning, preventing and preparedness, about a third on response and 20% for recovery.

Prof. Sally Archibald, an ecologist at the University of the Witwatersrand in Johannesburg, who was involved in the report, said: “This is a really important conclusion that I hope diverts money and resources in the right direction, as well as changing policies.

“We cannot promise that if the world gives money for proactive fire management, there will be no more extreme fire events because these fires are caused by global climate change,” she said. “But it would certainly help us minimize the impact and minimize the loss of damage.”

There are many natural solutions, including starting controlled fires using prescribed burning, managing landscapes by grazing animals to reduce the amount of flammable material in the landscape, as well as removing trees too close to people’s homes.

There should be more science-based monitoring systems combined with indigenous knowledge and better international cooperation, the paper’s authors said, ahead of the UN Environment Assembly in Nairobi.

“After a century of research we’ve come around to agreeing that how people burn their landscapes traditionally in Africa is probably the most appropriate for the ecosystem,” said Archibald.

Fire-management strategies vary globally, but as a very general rule, experts believe that ecosystems closer to the equator should have more controlled fires, and those farther away should have fewer. Exceptions include tropical forests such as the Amazon, which straddle the equator yet should have very few fires.

“It’s not a one-size-fits-all situation. Fire is like rainfall – you get different types of fire in different parts of the world,” said Archibald.

Climate change increases the conditions in which wildfires start, including more drought, higher air temperatures and strong winds. Equally, carbon emissions from wildfires are at an all-time high. Tackling the climate crisis is a key priority in wildfire prevention, the report said.

It also called for better health and safety standards for firefighters, including raising awareness of the dangers of smoke inhalation, reducing their exposure to life-threatening situations, and encouraging proper recovery between shifts.
Inger Andersen, director of the UN Environment Programme, said: “We have to minimise the risk of extreme wildfires by being better prepared: invest more in fire-risk reduction, work with local communities and strengthen global commitment to fight climate change.”

Prof. Guillermo Rein, at Imperial College London, who was not involved in the paper, said it was good to read an “extensive and international overview” of how fire management needed to change.

“The full report is impressive. It says so many good and important things,” he said. “Especially important is the emphasis on extreme wildfires and the recommendation for [a] move from reaction to prevention and preparedness.”